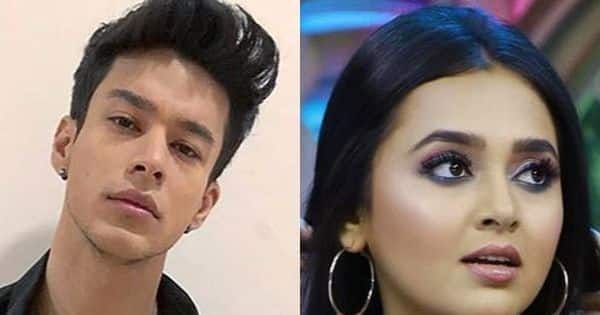 Bigg Boss 15 will see a massive fight between Karan Kundrra and Pratik Sehajpal tonight. This will happen because of task where things get heated between the two. They will charge at one another in an aggressive manner. It seems Karan Kundrra has kicked Pratik Sehajpal in the b***s. This will leave him in tears. The young man will tell Karan Kundrra that he might be his mentor on shows like Roadies but he is a very ghatiya person on Bigg Boss. Tejasswi Prakash will defend Karan Kundrra saying that even Pratik Sehajpal’s hands have gone to ‘inappropriate places’ in the heat of a task. She says at times even she was involved. Also Read – Bigg Boss 15, Day 63, Live Updates: Shamita Shetty faints during face-off with Devoleena Bhattacharjee

This leaves Pratik Sehajpal very disheartened. He starts crying. Pratik Sehajpal says he has always been conscious of many things but this is just unfair. Now, fans of the reality show contestant have reminded Tejasswi Prakash of the times when she also blocked him with her body. Take a look at the retaliatory tweets from fans of Pratik Sehajpal… Also Read – Bigg Boss 15: After several wildcard entries, now Shehnaaz Gill approached to enter the show as a guest?

It’s cute how these girls think they can touch a man & it’s naturally ‘okay’ because women can cause no harm but if a man touches them even by accident it’s over for them.

WTF is wrong with these people???

Look at the way he has been choked by 2 contestants repeatedly!! And then this teja has the guts to play women card against him?? Like seriously?? When is this physical violence going to stop??#PratikSehajpal #BiggBoss15

Someone please knock some sense into this teja bheja. Since the beginning of the show, the only one thing she has done is, played women card and has made false allegations on people. #PratikSehajpal #BiggBoss15

In the past, we have seen Tejasswi Prakash blocking Pratik with her body in the jungle task. There has been a huge fight between Shamita Shetty and Devoleena Bhattacharjee too. Also Read – Bigg Boss 15: Prerna Sehajpal asks Neha Bhasin why is she so bothered with Pratik’s secret girlfriend; ‘I wish you a very happy married life’