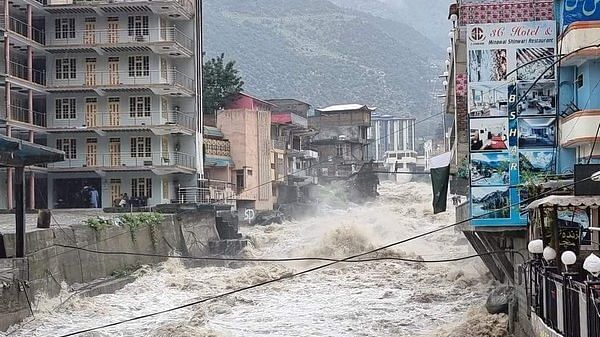 Pakistani actors, cricketers, musicians and social media influencers are dialling the world for aid. Many have swapped selfies and promotional posts for footage of floods wreaking havoc across large swathes of the country. However, a few have also been called out for providing only lip service and regurgitating television footage.

A third of Pakistan is under water in a ‘climate catastrophe’, which has seen the death toll rise to over 1,000. Around 20 million people are reported to be homeless due to unprecedented rains and floods.

Celebrities have been using footage from TV channels to reach out to their fans urging them to open their hearts and wallets to those in need. Popular producer/actor Humayun Saeed appealed to the government to take appropriate steps to curb displacement and asked his fans to do their bit.

Extremely distressing situation all across Pakistan following rain & floods. I appeal to the government to please take urgent action & provide all necessary relief to our displaced brothers & sisters.All of us too must extend our support to the flood victims in every possible way

In response, many of his followers asked him to contribute first. Some questioned the purpose of the tweets while others suggested he donate some of the money he earned from his films.

only tweeting for what ?? when the showbiz ppl will contribute ??

Saeed wasn’t the only celebrity to be called out. When popular actor Mahira Khan sought public support through a retweet of Alkhidmat Foundation Pakistan’s post, she was criticised for not having done enough, if anything at all, for flood relief.

Cricketer Shaheen Afridi also took to Twitter to summon public support for flood relief and was met with scathing criticism.

Player’s should also come up with some relief fund for affected people. Allah have blessed u people with so much

But there are some celebrities and political leaders who have already started pledging funds and are actively involved on the ground. Author Mohsin Hamid has pledged the entry fee for his masterclass towards flood relief victims. He has tied up with Indus Relief 2022, an organisation launched by Fatima Bhutto and her brother Zulfikar Ali Bhutto. The proceeds from the masterclass with the Moth Smoke writer will go to helping people affected in upper Sindh.

Singer Hadiqa Kiani has started Vaseela-E-Raah, through which she and her team will dispatch food, clothes and other basic necessities.

Her Instagram is now dedicated to raising awareness around the floods and the relief her team is able to provide those affected by the calamity.

Waseem Badami, a TV anchor, hosted a segment on ARY News and invited Syed Zafar Abbas Jafri, the owner of JDC Foundation, an NGO, and film and TV actor Fahad Mustafa. The trio discussed the wreckage caused by the flood to generate awareness. They also insisted that people and actors come forward for help and donate as much as they could.

Politicians stand up too

I want to thank the people of Pakistan, especially our Overseas Pakistanis, for donating so generously last night. In the three hours of our Telethon we had pledges of Rs. 5 billion.

Pakistan is also being aided by allies and well-wishers internationally as they receive financial aid from across the world. Turkey and the UAE have been providing tents, food, and other necessities.  The United Nations allocated $3 million. India is also considering extending aid to Pakistan.