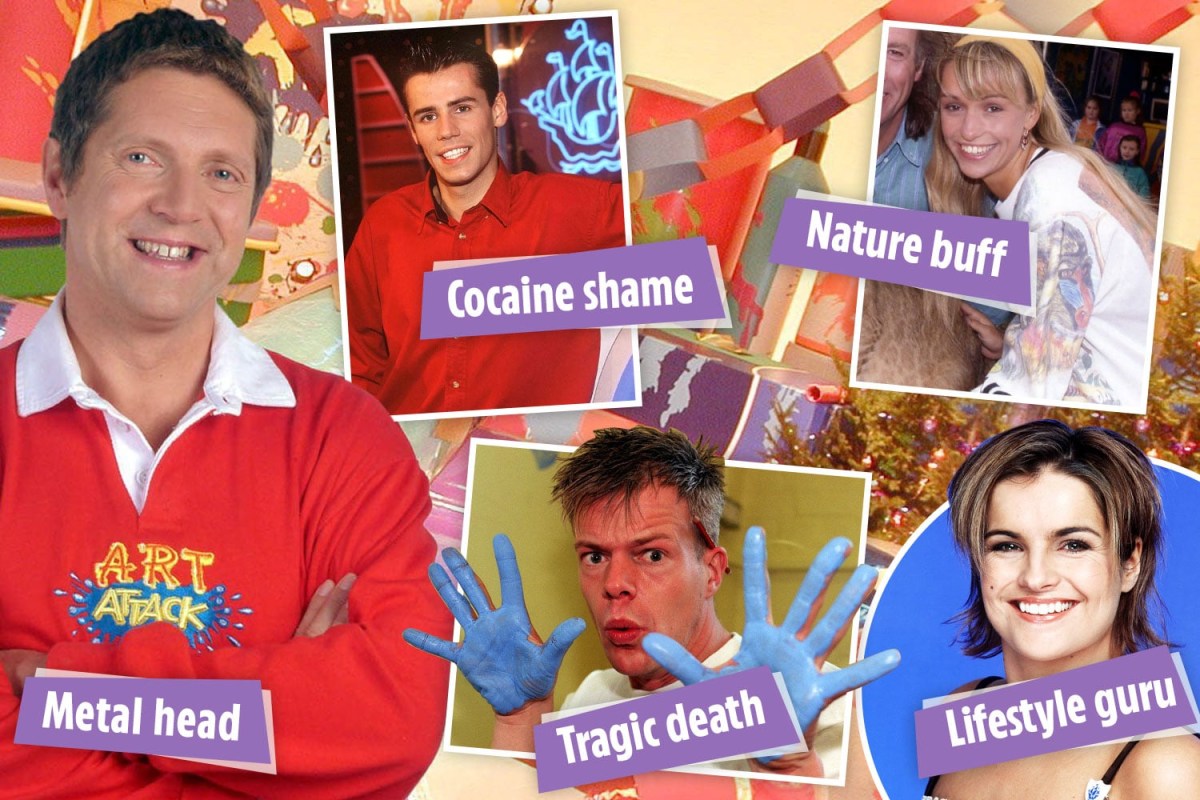 WITH his neat goatee and rockstar looks, Neil Buchanan is barely recognisable from his days as a Nineties kids’ TV presenter.

Neil played in his metal band, Marseille, before becoming a TV regular, and made his return to music after the show ended.

Last year, he was forced to deny he was Banksy after rumours spread online that Neil was indeed the mysterious graffiti artist.

And this week, fans were left stunned by his radically different look 31 years after his television debut.

Here, we reveal what happened to our other favourite Nineties kids’ telly stars.

Fans of a certain age will remember Michaela for Eighties kids’ show Wide Awake Club, which she presented with wacky Timmy Mallett.

She then went on to the pop music show, The Hitman and Her, with Pete Waterman, as well as CBBC’s The Really Wild Show along with Chris Packham.

She and Chris are now best known for their seasonal BBC nature programmes – Springwatch, Autumnwatch and Summerwatch.

Michaela released two of her own music singles and was immortalised in the Scouting for Girls song, Michaela Strachan You Broke My Heart (When I was 12).

The mum-of-one had a double mastectomy in 2014 after being diagnosed with breast cancer.

Another artist, cartoonist Mark Speight presented CBBC’s SMart from its launch in 2004 until a year before it ended, in 2008. Other faces on the show included Radio 2’s Zoe Ball.

In January 2008, Mark found his fiancee, Natasha Collins, dead in the bath of their London flat.

He was arrested on suspicion of murder, but not charged and an inquest later determined she had died of a drug overdose and severe burns from hot water.

Four months later, Mark went missing for six days. He was found hanged near Paddington station, aged 42. Two suicide notes described how he could not live without Natasha.

Trevor Neal and Simon Hickson met at drama school at Manchester University and became known as a comedy duo on BBC programmes Going Live! and Live and Kicking.

Simon has sung in a choir.

They have both moved towards working behind the camera, writing scripts including for the CBeebies series Dinopaws and CITV show My Parents Are Aliens.

Their most recent work has been for CBBC’s Get Well Soon Hospital, which stars former Strictly contestant Dr Ranj.

Richard Bacon’s tenure at Blue Peter only last 18 months before pictures emerged of the presenter taking cocaine at a party.

After being sacked, he rebuilt his career with slots on The Big Breakfast as well as guest hosting This Morning and, more recently, Good Morning Britain.

His most recent work in the UK was producing Stacey Dooley’s This Is My House.

Three years ago, he became suddenly ill on a plane from the US and spent 11 days in an induced coma in Lewisham hospital, South East London, after contracting a killer lung infection.

He said medics told him after he came round: “They said to me afterwards, ‘It wasn’t that you might die, we expected you to die.”

Richard now lives in Hollywood with his wife, Rebecca, and two children.

Mullet-haired star Pat Sharp is best known for hosting CITV’s Fun House, which put kids Theviraltime their paces on a series of slime-riddled assault courses, with the help of glamorous twin cheerleaders Melanie and Martina Grant.

Pat also presented Top of the Pops, and was among the line-up on its last programme in 2006.

In 1987, he was voted as having the Worst Haircut at the Smash Hits Poll Winners Party.

It was his Norwegian wife of 35 years, Monica, who convinced him to cut it off.

After TV, he moved into radio and now sports a smooth blonde quiff.

He has been on celebrity Come Dine with Me and was on I’m a Celebrity in 2011, and he released his book, Re-Run the Fun: My Life as Pat Sharp, last year.

The twins have continued to perform in stage productions. Martina is married with two children. Melanie sadly lost her husband to leukaemia in 2009.

Vicar’s daughter Katy Hill from Poole, Dorset, made her debut on Blue Peter in 1995, staying on the show for five years, before spending a year on Live and Kicking!

Her Blue Peter assignments included training with the England football team, living with a family in Mongolia and joining the Cirque du Soleil gymnast troupe.

She divorced her childhood sweetheart Andrew Frampton after two years of marriage.

Katy went on to marry fellow Live and Kicking! presenter Trey Farley in 2004 and they live in Los Angeles, USA, with their daughter, Kaya, and son, Akira.

She has retrained as a life coach.