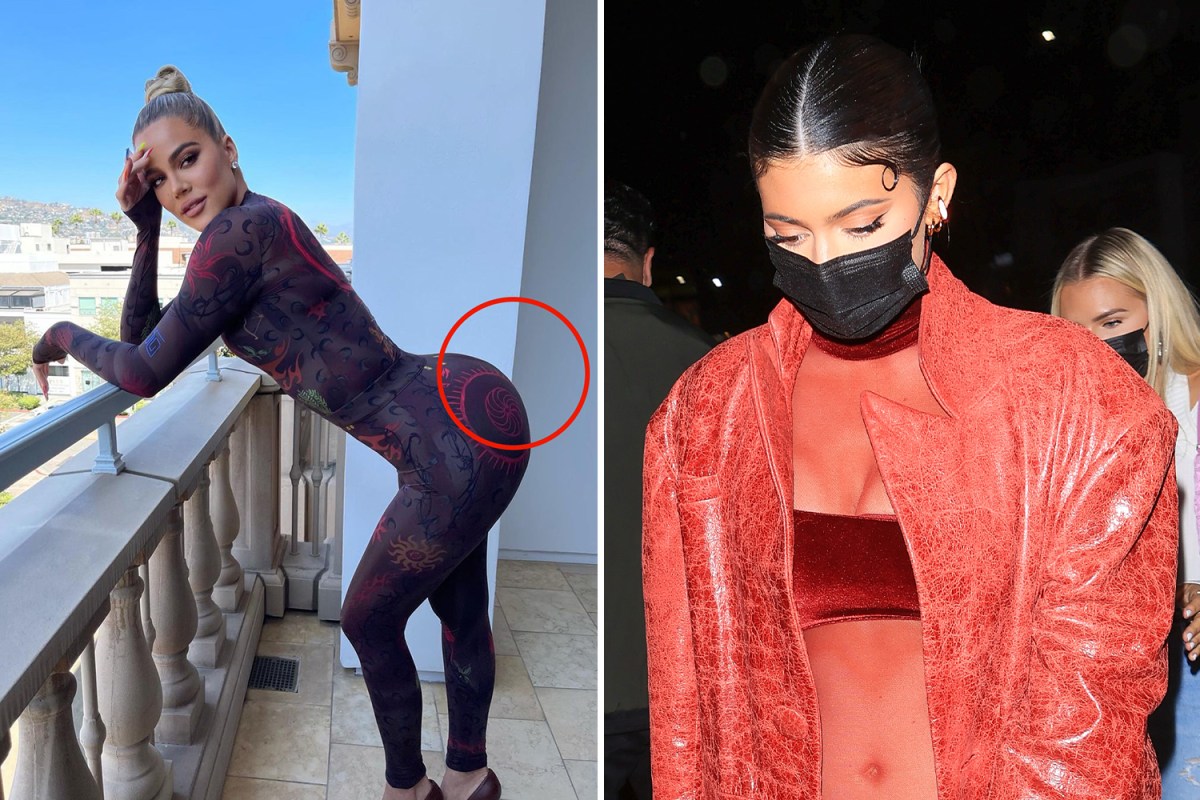 THE Kardashian family has faced its share of controversies in 2021 from Khloe Kardashians photoshop scandal to Kyle Jenner’s Astroworld backlash.

The reality stars have found themselves at the center of controversy several times this year, but have bounced back.

Controversy spared no member of the famous family.

Khloe, Kim, and Kourtney each faced their own drama at some point — and in some cases several points — this year.

In addition to being dragged into a cheating scandal involving ex Tristan Thompson, Khloe was accused of photoshopping several photos and sharing questionable posts.

Kim, meanwhile, was slammed for dropping her Fendi x Skims line amid the tragedy at Astroworld Festival.

As for Kourtney, fans have repeatedly come for her for showing too much PDA with Travis Barker, even cozying up to him in front of her kids.

Here’s a look back at some of the controversies the Kardashians have faced in 2021.

On more than one occasion this year, and in the past, Khloe has been accused of altering her photos.

She was slammed for photoshopping a fragrance ad she appeared in with sisters Kim and Kourtney late this year.

Khloe appeared to be sporting a very different look in the ad.

She ditched her usual blond locks for a short brunette bob.

Fans praised the sibling trio as “beautiful,” while several suggested the ad had been digitally manipulated.

Prior to that, Khloe was called out for photoshopping a post she shared of herself wearing Good American bikinis.

Critics slammed the former Keeping Up With the Kardashians star for looking “fake” in the photos, noting that she looked “completely different.”

Months earlier, an undoctored photo of Khloe in a bikini leaked online.

Although she still stunned, it made it clear that other photos of her had been altered in some way.

Khloe received several positive comments from fans after the photo surfaced, but her PR and legal teams still tirelessly tried to scrub the image from the Internet.

They weren’t successful, however.

Khloe eventually admitted that the photo had been photoshopped, but pleaded with fans to understand why.

She explained herself in another post, showing off her “unretouched” and “unfiltered” body in a topless picture.

The reality star said she has “struggled with body image her whole life.”

Kylie was slammed for her handling of the aftermath of the Astroworld tragedy which left several attendees dead.

She and several members of her family were slammed over social media posts left up after the incident occurred.

Kylie then faced even more backlash when she went radio silent following a statement some felt was lackluster.

She broke her silence after several weeks with a post promoting her fashion line with sister Kendall.

The Kendall + Kylie Instagram account posted a video with the caption: “We are so excited to announce that you can now shop #kendallandkylie styles in the UAE @kendallandkylie.ae #thedubaimall #thegalleriauae.”

Critics flocked to the comments, with one writing: “10 beautiful humans died at Astroworld including a nine-year-old boy. Ezra [Blount].

“Show so f**king respect for those that died and stop flogging your s**t on IG when the bodies aren’t even cold.”

Another fan added: “Justice for the Astroworld victims!! Nobody wants to buy your clothes with blood all over them.”

“Girl bye. So disrespectful to be marketing your clothes at a time like this,” a third shared.

Kylie’s initial statement on the incident read: “Travis and I are broken and devastated. My thoughts and prayers are with all who lost their lives, were injured or affected in any way by yesterday’s events.

“And also for Travis who I know cares deeply for his fans and the Houston community.”

Travis Scott has also faced backlash. Around 150 people have joined lawsuits against the rapper after it came to light that he played for 30 minutes after the incident, which has been declared a “mass casualty” event.”

Tristan is currently locked in a legal battle with Maralee Nichols after it came to light that he cheated on Khloe with her and allegedly fathered a child.

The NBA star initially claimed that he slept with Nichols once, but later admitted in court documents that they met up on multiple occasions.

He maintained that the relationship was strictly sexual, however Maralee said otherwise.

Tristan claimed he communicated with Maralee on Snapchat and only to arrange meeting times and locations.

She refutes that claim and is seeking child support.

Tristan hasn’t denied fathering the child, but did seek a paternity test.

He allegedly tried to offer Maralee thousands of dollars in hush money, but she declined.

The Canada native hasn’t filed for custody or visitation with the baby.

Khloe is said to be “mortified” by the scandal.

Kendall was accused of cultural appropriation after she released a questionable ad for her tequila brand, 818.

The ad features the model riding a horse Theviraltime an agave farm in Jalisco, Mexico, according to PEOPLE.

“What an incredible experience i have had thus far, learning about this beautiful place, it’s beautiful culture, and the beautiful people! @drink818 has launched in California… we will be rolling out to the rest of the US all summer long, keep a look out!!!” she captioned the post.

Fans slammed Kendall over the post, with one writing: “No miss Kendall, we do not ride in horses all the time, no we do not wear our hair in braids all the time, no workers do not get to drink the tequila (also that’s not the way you drink it) + workers do not work with that kind of clothes and finally, your advertisement is so whitewashed/california vibes. Jalisco is not California, so don’t try to make it that way.”

Another critic tweeted: “YOU’VE GOT TO BE KIDDING ME….leave it to Kendall to be as tone deaf as possible, this is so offensive. Modeling that chic migrant worker look for her tequila brand.”

The Good American co-founder shared a poorly translated scripture the read: “Whenever you give to the poor, don’t blow your trumpet as the hypocrites do in the synagogues and in the streets so that they may get praise from people. I assure you, that’s the only reward they’ll get.”

One Reddit user wrote: “While I’m sure she just skimmed Theviraltime and posted bc it’s a Bible verse, I just don’t see how you can miss the antisemitism.”

Another wrote: “I be she doesn’t even know what a synagogue is.”

Kourtney and Travis Barker have been repeatedly slammed for showing too much PDA.

The couple regularly teased their sex life online whether they’re sharing photos of messed up beds or lingerie on the Internet.

Kourtney and Travis recently came under fire for a photo of the Blink-182 rocker licking his bride-to-be’s foot.

Fans pleaded with the duo to “stop.”

The drummer posted the photo with the caption: “All I want for Christmas.”

Fans flocked to the comments where they showed they had had enough.

Another added: “you have time to delete this.”

Prior to the post the couple was slammed for nearly locking lips in a steamy display in front of Penelope, Kourtney’s young daughter.

The reality star posted a sponsored post about the migraine medication Nurtec ODT.

In the video she told fans that she loves working out and doesn’t have to worry that she’ll have to skip the gym because of her headaches.

Corey appeared in the comments, writing: “And I just love to Love you!”

One fan sarcastically responded: “That’s not creepy or anything.”

The comment came after he faced criticism for another reason.

“I hope you have the best day, year, life!!! You consistently have incredible energy and are always there for everyone.

“You’re always the life of the party. You can do the splits for goodness sakes! Cheers to you today and everyday!!!”

Corey replied to the post with a heart emoji and commented: “Thx for the words bunny.”

Fans seems surprised by the nickname choice, calling it “strange.”

Kim was slammed for promoting her Skims collaboration with Fendi in the days after the Astroworld tragedy.

Days after the tragedy, an announcement was posted to the brand’s Instagram page.

Fans hit back in the comments, writing: “Please think about the 8 victims.”

Another wrote: “How tone deaf is it to keep marketing your product after someone from your family is responsible for causing death & injury to a huge crowd of people!?”