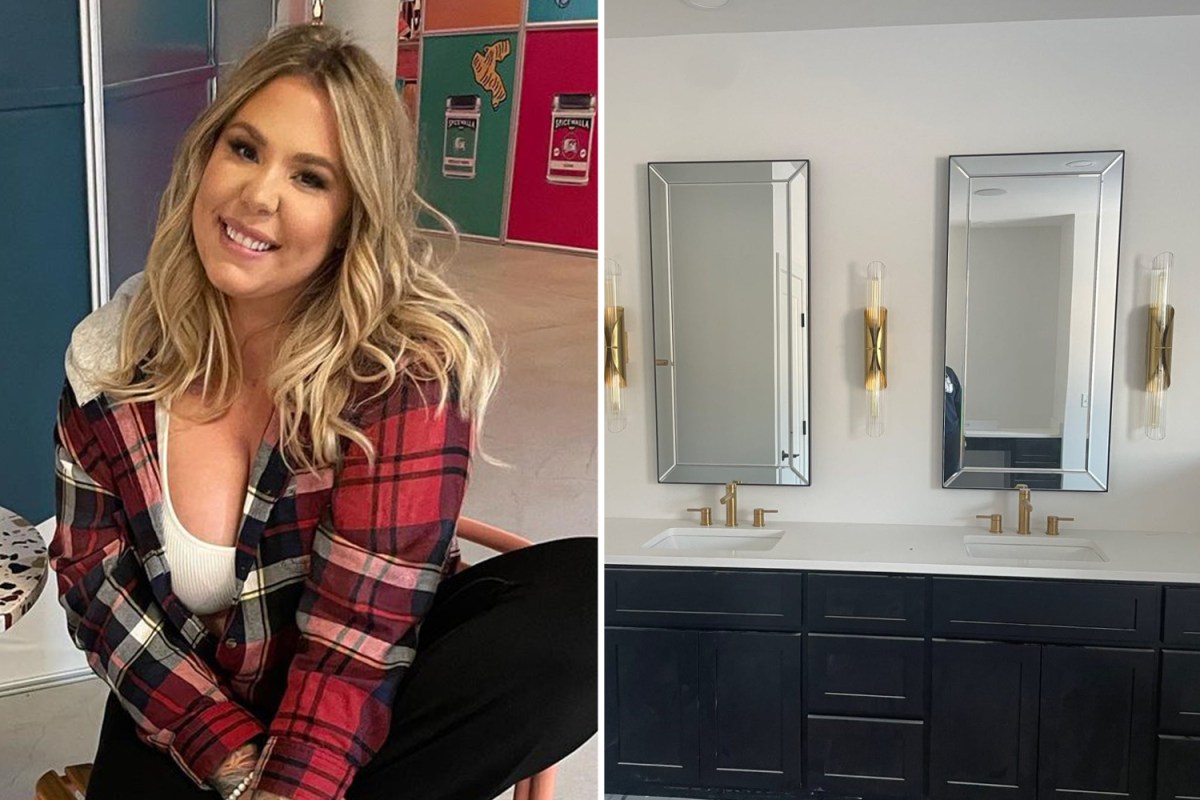 KAILYN Lowry shared another update with fans on her home, showing off her sparkling new bathroom in the $850K mansion.

The Teen Mom star has been building the home for the better part of a year.

Kailyn proudly showed off her shiny new bathroom on her Instagram Story.

She posted a photo of the dual sinks, with his and hers mirrors, gold light fixtures and dark cabinetry.

The reality star captioned the post with several starry-eyed emojis, and included a slider for fans to vote on how much they liked the look.

Later that same day, she shared an update from builder Kyle Hill who is putting together custom furnishings for her home.

He shouted: “Yo, yo. Happy Tuesday. We about to get out of the shop. I didn’t get to get on here much, but we did get Kailyn’s two huge bookcases framed out at least.

He concluded: “These turned out freakin’ awesome.”

Kailyn has been sharing updates throughout construction, especially as it comes to an end.

As 2021 came to a close, the MTV personality showed just how close to done her home is.

She purchased the land to build her home on in February 2021 and spent the entire year working on it.

Kailyn shared pictures and video of the latest finished, and almost finished, bits in the house.

She revealed in Instagram Story videos that she hadn’t planned to go to the house that day, but got word that some projects were being finished and wanted to pop by.

She said: “I was really trying hard not to come to the new house, but the electrician said he was gonna put the other side of the island lighting in yesterday and so I didn’t come yesterday and showed up here today and there were other things they got done so I’m super excited to post about them here.”

Kailyn shared a pic of her kitchen island illuminated by 10 pendant lights hanging from the ceiling.

She also showed off her large walk-in closet, which featured a large gold light fixture.

She captioned the post: “&&&& Kyle did my closet lighting I know those pieces were a huge pain to put on so Kyle if you’re reading this, I appreciate you!”

Above her bed, according to her Instagram Story house tour, hung a gold chandelier.

She fawned over the piece, writing: “I dieeeee.”

Kailyn then showed off the fireplace, which remained unfinished.

She showed off a black textured tile that will eventually surround it.

Per her post, picking out the tile was not an easy process.

“This is the fireplace tile! After 5 picks.”

She then showed off her pantry, which she appeared most excited about.

Kailyn spoke to fans about it in the video before she even got in the house.

Although it was yet unfinished, she showed it off and explained where things will go when it’s complete.

She explained that the area will eventually house shelves, a fridge, and more.

“Ok & this is the pantry! It’s not done yet – still have to paint in here & a beverage fridge, Icemaker and Keurig are all going in on the other side,” she shared.

Before her home tour, Kailyn showed off some of the custom furniture pieces that will be in her home.

Kyle is also creating those pieces, along with the massive bookcases.

He posted an earlier update, explaining in the video: “These are going to be more modern than we normally do, which I love.”

He explained that he was working on the aforementioned bookcases, as well as a maple table and a custom plant holder for the star.

Kyle joked: “You know you’re a green thumb when you order a danged plant holder.”

He also appeared to tease a mystery project, writing: “This is going to be sick. Everything is going to be made of maple. I promise you it’ll be one of a kind.”

Kailyn’s decision to share the design process of her home has scored her mixed reviews from fans.

Some love looking inside her lavish home, others don’t appreciate her taste.

Kailyn has been slammed for questionable decisions, like “awful” tile in a bathroom and painting a ceiling black.

The tile she showed off not once, but twice, is white with black streaks throughout.

Reddit users cracked jokes about the look of it, with one writing: “This is awful. It literally looks like her kids scribbled on the floor.”

Another commenter wrote: “The tiles around her door frame don’t line up and it’s driving me nuts.”

Kailyn has ignored the backlash for the most part.