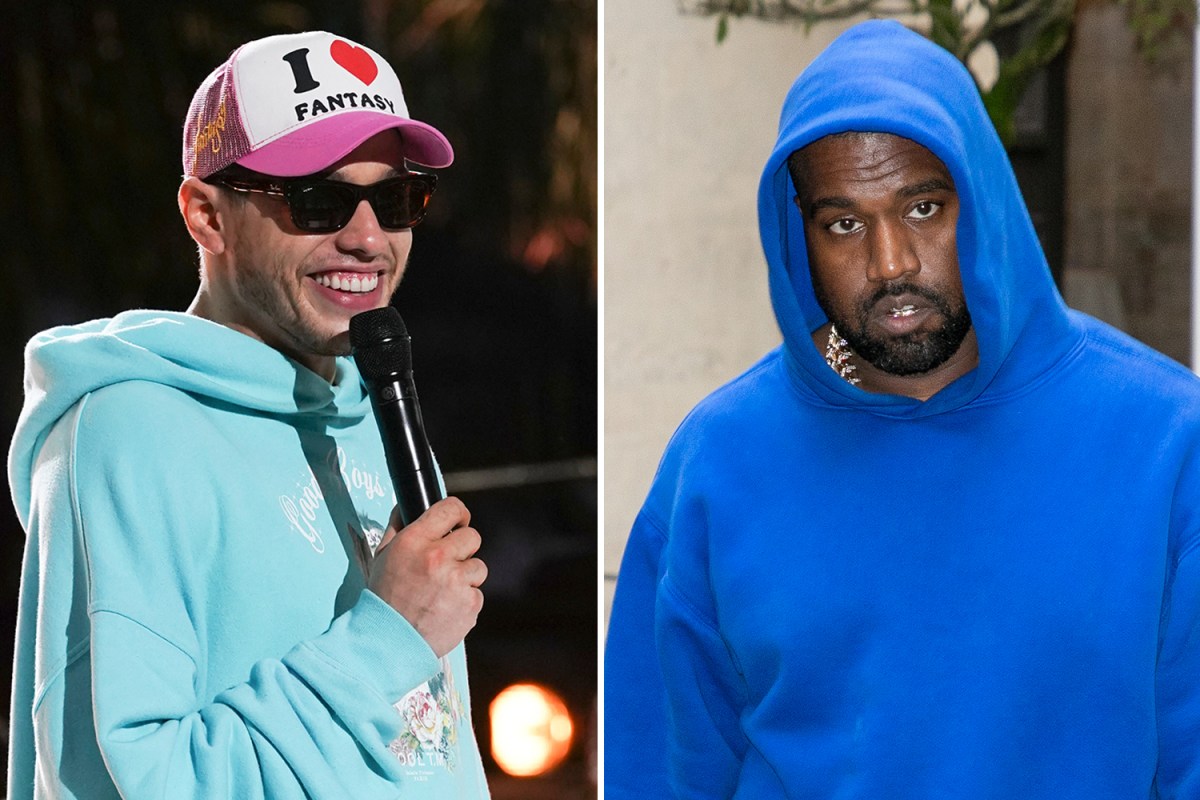 PETE Davidson thinks Kanye West’s threats to “best his a**” are “HILARIOUS” as Kim Kardashian has “hired more security.”

The 44-year-old rapper made the threats in his new song Eazy, which was released last week.

In Kanye’s new song with The Game, he called out his ex’s new man Pete, 28, by rapping: “God saved me from the crash, just so I can beat Pete Davidson’s a**.”

While Kim, 41, seems to be taking her ex’s threats seriously, Pete reportedly thinks Kanye’s claims are a joke.

“Not just that — he thinks the whole [tabloid drama with him, Kanye and Kim] is hilarious.

The source said that the Saturday Night Live comedian- who has gotten media buzz for his highly publicized romances in the past- is used to press attention.

However, he acknowledges his relationship with the Keeping Up With the Kardashians star has put him on another level of scrutiny.

The insider continued: “It’s funny to him that the press wants to know his every move all of a sudden.”

Another source told the outlet that Kanye’s diss track has positively impacted Kim and Pete’s relationship, claiming: “The whole craziness with Kanye last week has brought Kim and Pete closer.”

Kanye’s diss track is not the only drama he’s had with Kim over the past week.

The rapper also claimed he was blocked from entering Kim’s house and that he was barred from his daughter Chicago West’s fourth birthday party – which he ended up attending.

Kim is taking her ex’s claims and behavior seriously and even hired more security.

A source exclusively told The Sun: “Kanye has never been allowed free access to the house since they split. That’s always been very clear and agreed upon verbally.

“He can’t just walk in there. He signed over the house to her and she paid him money for it.

“No one is just entitled to walk in. He’s now choosing to make it a public battle – and again involve the kids.

“There is no way that Kim is going to let Kanye just roam back into the house, and never has since the day he left.”

The insider added: “She’s hired a new security team – so there was no one with any previous connection to Kanye.

“She does not want to be drawn into any battle with him, but she’s had enough now.

“While Pete is being supportive, it does put a strain on them and she’s worried it’ll ruin what they have.

“Kim is trying her hardest to draw a line as to what she involves Pete in. Nobody wants him dragged into a divorce battle that has nothing to do with him.”

The KUWTK alum’s reported move to hire a new security team for her $60M house came just days after Kanye’s Instagram tirade about not getting the Chicago birthday invite.

A source told Us Weekly that there were “always two parties planned.”

They continued: “Kim was shocked to learn that he released a video about not being invited to her party.

“That’s not true and as soon as he asked to come he was given the location.”

Kim “wouldn’t deny him access to the kids,” the insider added.

They said she “just wants more boundaries and structure, a set parenting plan.”