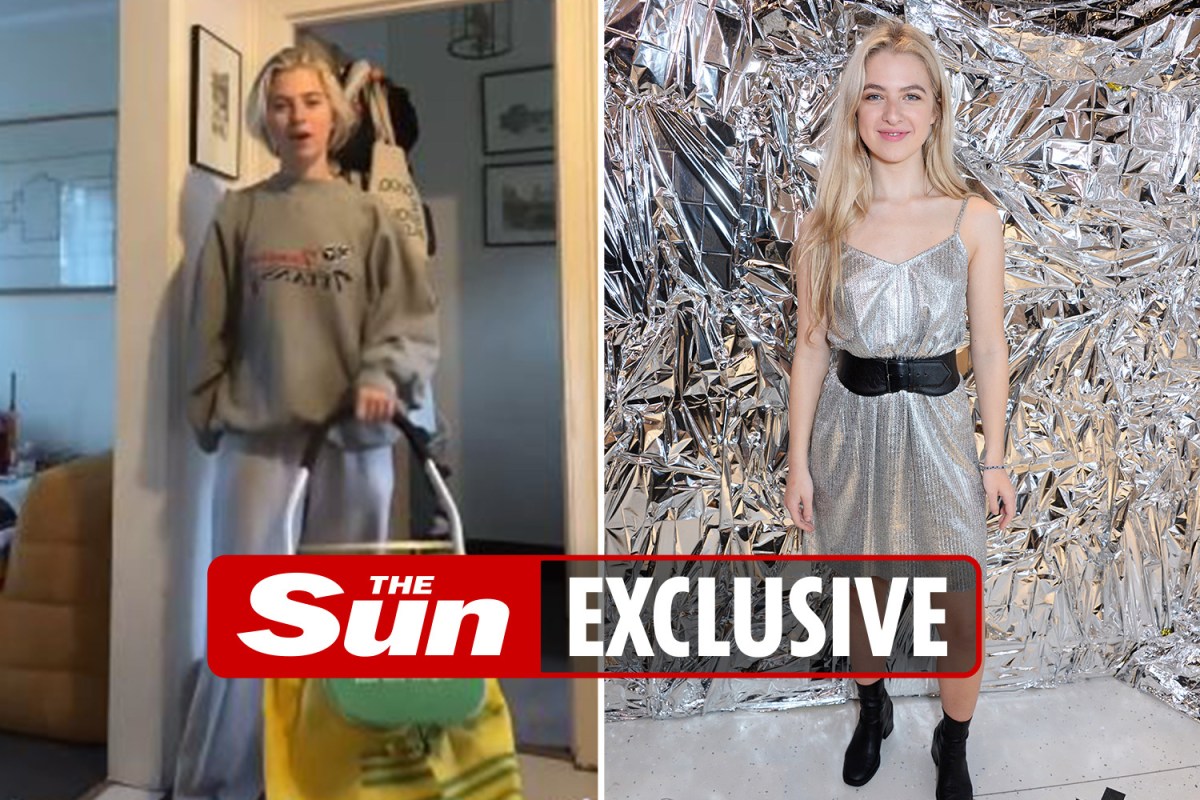 But Anais has teamed up with Stroli, a brand of bags with wheels, and is helping to flog them by giving fans a discount code.

In screamingly un-rock’n’roll style, she said the clunky trolley was, “The best purchase I’ve made”, explaining she was tired of trying to carry all of her bags of groceries home.

I can’t see Britpop star Noel being a convert.

Bragging about it on TikTok, Anais said: “I’ve got to show you the best purchase I’ve made.

“I bought a shopping trolley. And I can hear the cries, ‘Anais, they’re for grannies’.

“But are they? Does it say that anywhere, or have we just stereotyped it?”

Rolling it around her home, she continued: “I got a Stroli. They come in various different colours, look how manoeuvrable this is. The reason I got one is because when I do a weekly shop I can’t carry all the bags home. I find it too heavy to do alone because I live alone, and I also can’t drive so I can’t drive to the supermarket.”

Her video racked up more than 100,000 likes, so maybe I’m out of touch with what’s cool among kids these days.

During his heyday in Oasis, Noel and his bandmates got deported from the Netherlands following a drunken brawl and rowed with just about every musician going.

He once sang he would “Start a revolution from my bed” on No1 hit Don’t Look Back In Anger.

But bigging up her shopping trolley, Anais claimed to have started her own “revolution.”

She added: “Go buy one, there’s literally zero reason not to now. Join the revolution — yes, it is that serious.”

What on earth has the world come to.

FASHION is clearly in Jesy Nelson’s jeans judging by this shot.

The former Little Mix singer proved she has bags of style after jetting out to Los Angeles.

Dressed in Tommy Hilfiger dungarees and a sports top, she completed her look with a statement white Balenciaga bag worth a hefty £650 – despite it being able to hold little more than a passport and phone.

Jesy is expected to return with new music soon, having already written a string of heartbreaking tracks about her rocky romances.

On one, Jesy, who has dated Chris Hughes and Jake Roche, sings: “Did you take her to the place where you told me that you loved me?”

Now that she is single, hopefully Jesy can write some more uplifting songs.

NICK JONAS and his wife PRIYANKA CHOPRA have become parents.

The couple said last night they had welcomed a child via surrogate.

On Instagram, Nick said they were “overjoyed” and added: “We respectfully ask for privacy during this special time as we focus on our family.”

Nicki raises raunch for a relaunch

FROM bickering with Little Mix to spreading ridiculous fake news about the Covid vaccine, Nicki Minaj has had publicity for all the wrong reasons lately.

But I can reveal she is now determined to return to form and is hoping to relaunch her career with new music next month.

She has enlisted fellow US rapper Lil Baby – who featured on Drake’s No2 hit Girls Want Girls last year – for her next single.

Nicki has already taken part in a typically raunchy video for their collaboration.

A music source said: “Nicki is ready for a comeback and has got Lil Baby on board for her track, called Do We Have A Problem?.

“It will be released in the next few weeks.

“She has been hard at work in the studio over the past year and is hoping this can help gain her some momentum again. The video has been made to shock fans and she looks incredible, so it is all systems go.”

Despite enjoying a Top Five single at the end of 2021, when she featured on Jesy Nelson’s debut Boyz, Nicki has struggled to maintain the chart domination she enjoyed at the start of her career.

Meanwhile, rival rapper Cardi B has seen her profile continue to rise.

Awkwardly for Nicki, insiders tell me Cardi is also “very close” to dropping another song, meaning a good old-fashioned chart battle could be on the horizon.

All I ask is that Nicki keeps her wacky views to herself and focuses on the music.

HE’S had his pick of beautiful women including Kim Kardashian and current girlfriend Julia Fox – but I’ve never seen Kanye West look happier than when seen giving this ice cream a good licking.

But it didn’t calm the uptight rapper down. On social media yesterday he urged Netflix to let him edit its upcoming documentary about him, called Jeen-Yuhs.

Kanye said: “I must get final edit and approval on this doc. Open the edit room immediately so I can be in charge of my own image. Thank you in advance.”

Time to get another Mr Whippy, Ye.

MIX OF MUSIC IS MAD

JUST like the Baz Luhrmann film it is based on, the stage musical of Moulin Rouge! is an absolute feast for the eyes as soon as you set foot in the red velvet-clad theatre.

The show is camp, feel-good and jam-packed with more than 70 well-known pop songs, including the movie’s signature tune Lady Marmalade, to make it the most random jukebox musical ever.

The staging is really sumptuous and probably the best you will find in the West End.

But elements of the show feel like it is style over substance.

It follows Moulin Rouge cabaret performer Satine as she falls for a handsome British chap called Christian, despite being forced into a relationship with the wealthy Duke of Monroth.

But the story comes second to some truly mad musical mash-ups, which would make the cast of Pitch Perfect blush.

At times the show verges on panto, especially when you have the grey-haired cabaret owner Harold Zidler performing a version of Rihanna’s Only Girl (In The World) in a posh English accent.

But for a trip to Paris without the need for a Eurostar ticket, this musical is well worth it.

LOVED-UP Maya Jama cuts a mean look after returning from a romantic festive break in the States.

She teamed the look with an orange leather coat.

Maya shared the picture online after returning from the US, having spent the Christmas period with Ben.

He popped the question during the holiday and Maya confirmed the news last week – by showing off the huge diamond engagement ring.

No one will ever be as much of a gem in my eyes.

IT seems like Lottie Moss was only back on the market for five minutes after her split from The Vamps’ Tristan Evans at the end of last year.

But now the model, sister of Kate, has got a new man – London rapper Milkavelli, who counts Skepta as a pal and has the most tattoos I’ve ever seen.

“They have mutual friends and after spending some time together they really clicked. It has been a bit of a whirlwind.

“Lottie has spent the past week at his house in London and they’ve been hanging out a lot. Their closeness is known among their friendship circles but publicly Lottie has been coy about him.

“But their mates think it won’t be long until they’re properly together in the public eye. She seems so into him.”

Though I raise my eyebrows at her new fella, her family aren’t likely to be fussed.

After all, her big sis once brought home Pete Doherty.

KELLY OSBOURNE is following in her mum Sharon’s footsteps by finding her own rock star partner.

The socialite, who is also the daughter of Black Sabbath’s Ozzy, has confirmed she is dating Slipknot’s DJ and keyboard player Sid Wilson.

She cosied up to him in a picture posted on Instagram as he turned 45 and wrote: “Happy birthday baby!”

It is Kelly’s first romance since she split from her boyfriend of a year, cinematographer Erik Bragg, in October.

1. We Don’t Talk About Bruno – CAST OF DISNEY’S ENCANTO

DISNEY’s Encanto is a runaway success with its biggest song, We Don’t Talk About Bruno, topping the charts and is the first original Disney song to do so. The soundtrack is by Hamilton creator LIN-MANUEL MIRANDA.

1. Fix Yourself, Not The World – THE WOMBATS

6. The Boy Named If – ELVIS COSTELLO & THE IMPOSTERS

10. The Highlights – THE WEEKND

THE WOMBATS have scored their first No1 album after almost two decades as a group. Their fifth record Fix Yourself, Not The World beat new entries from BONOBO and ELVIS COSTELLO, while last week’s chart-topper from THE WEEKND has dropped to No4.