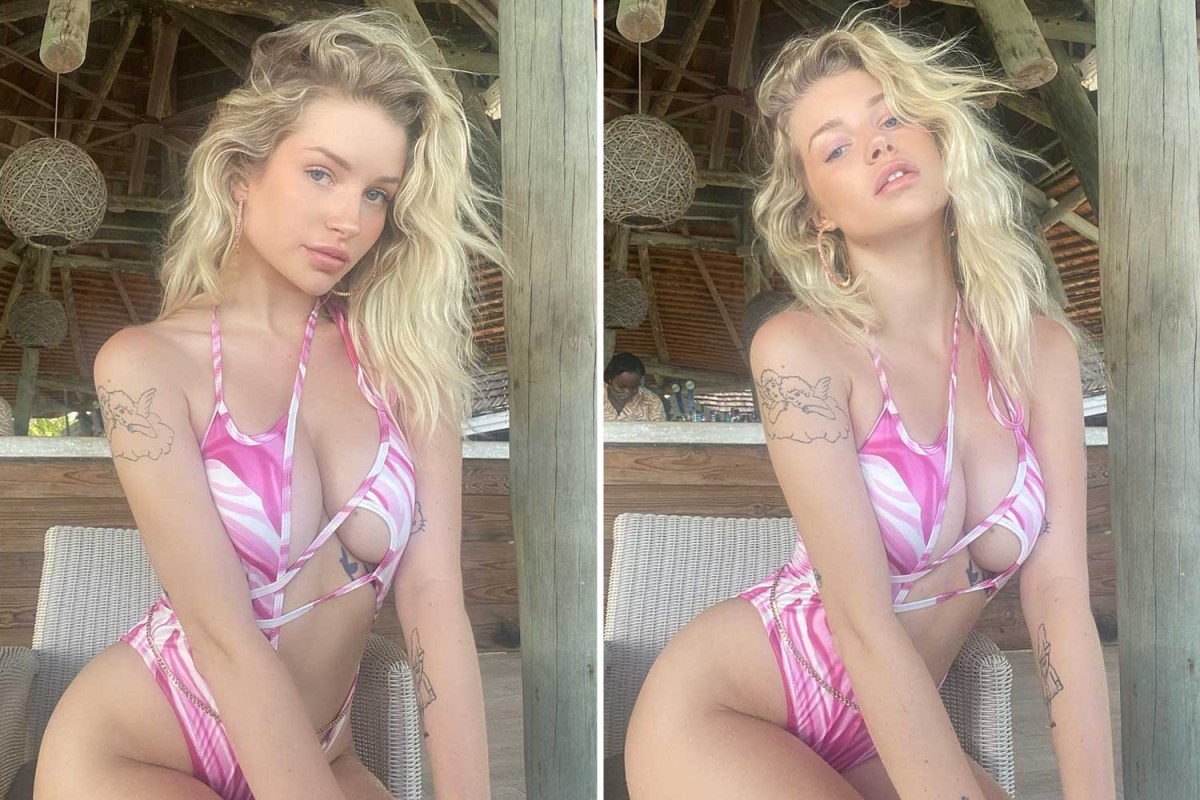 LOTTIE Moss looked to have put the tough times behind her as she stripped down to a barely-there swimsuit on her Antigua holiday on Saturday.

The model posed for the camera in the pink cut-out swimwear days after she was left horrified to find out a former pal had posted her phone number online.

Lottie, 23, was left devastated earlier this week as she discovered her followers were being encouraged to post her explicit OnlyFans images by an ex-friend.

The ‘evil’ ex-pal even posted her phone number online – but despite her breaking down in tears, the model appears to have shrugged off the drama.

Over the weekend, the star stripped down to the barely-there PrettyLittleThing cut-out swimsuit and put on a raunchy display for her followers.

Enjoying the sunshine in Antigua, Lottie – who is the little sister of supermodel Kate Moss – posted a series of selfies as she sat a beach bar.

Flaunting her curves and her ample assets, the influencer placed her hands on her knee as she bent towards the camera and fixed a sultry stare at the lens.

Lottie styled her blonde locks into beachy waves, while she added a soft palette of make-up – including pink shadow and a nude lip – to complete her look.

“Island gal,” she captioned the series of snaps, which set fans pulses racing as they flooded the comments with compliments for the model.

The star followed up with a series of stories posts showing off her minimalistic make-up look as she hit the beach at Galley Bay Resort & Spa.

It comes days after Lottie broke down in tears as she revealed her phone number had been leaked online by someone who was once close to her.

The 23-year-old model was horrified to discover her followers were being encouraged to post her explicit OnlyFans images online, in a shocking betrayal.

She received a message from a concerned fan, which read: “He’s telling the boys in the group chat to sub to your OnlyFans and leak the pictures to your mother’s Instagram.”

Another post revealed she had already received a number of phone calls from unknown callers, while the perpetrator continued to mock her online.

Disgusted, Lottie wrote: “What an evil human being.”

Lottie, who is Kate Moss’s half-sister, has become known for her racy snaps after packing in fashion modelling and turning to the adult site.

The stunner previously admitted she was making up to £70,000 a month by posting X-rated images on subscription site OnlyFans.

Chatting on Jamie Laing’s podcast, Private Parts, he asked her about joining the popular site.

She explained: “You can make upwards of like $100,000 a month if you’re doing it regularly and have followers.”

Lottie was viewed as a rising star in the modelling industry after being spotted at half-sister Kate’s wedding to former husband Jamie Hince in 2011, when she was 13-years old.

She was promptly signed to the highly respected international modelling agency Storm, who are understood to take a dim view of her recent career choices.