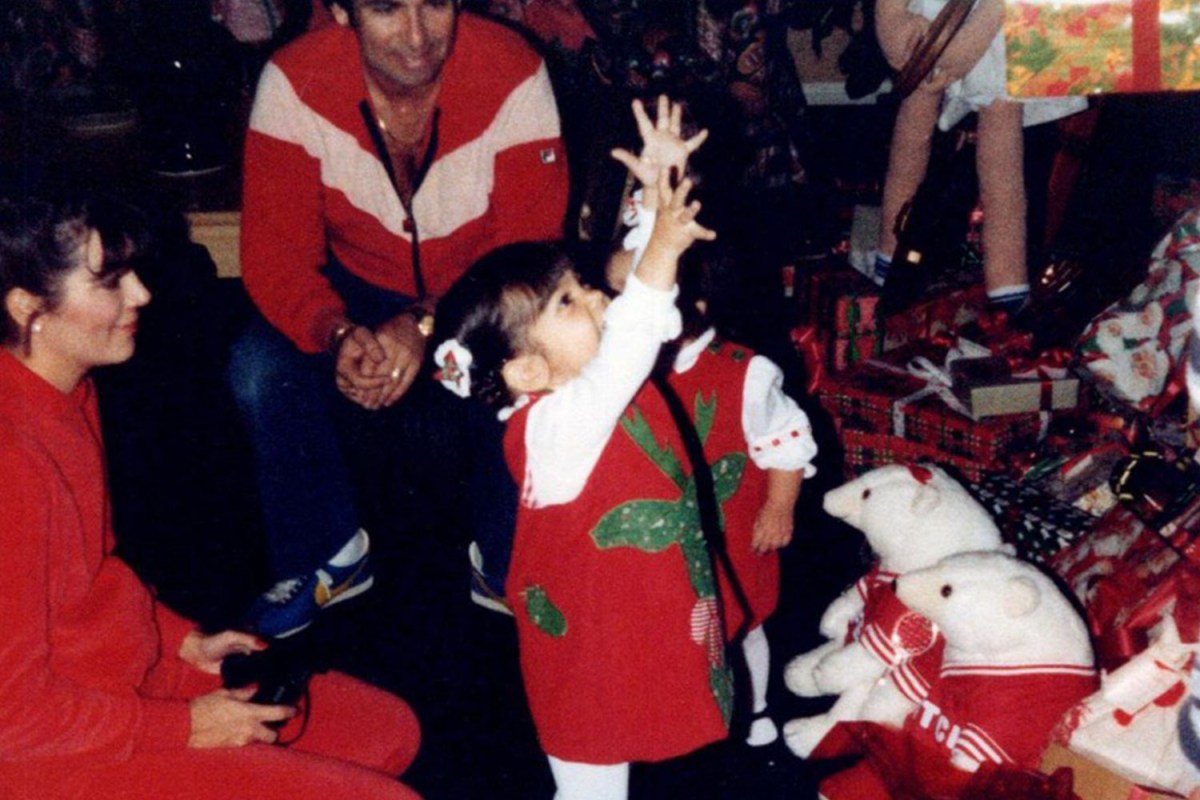 KOURTNEY Kardashian enjoyed a throwback to a Christmas gone by as she shared images from her childhood when late father Robert dressed up as Santa.

The Keeping Up With The Kardashians star, 42, was flooded with sweet comments as she revealed never-before-seen snaps of her lawyer dad enjoying holiday season alongside her mom Kris Jenner and sister Kim Kardashian, wearing an adorable matching outfit.

They looked delighted as they posed by a lavishly-decorated tree before dancing around in excitement when Santa arrived.

Wearing his typical red suit and carrying a red sack full of gifts, they rushed over for a chat,

Later images show the sisters enthralled as he told a Christmas story before they rushed to open the gifts with Kris, dressed in a red jumpsuit, and Robert wearing a red tracksuit top and jeans.

The Poosh founder revealed in her caption it was actually her dad behind the white fluffy beard as she wrote: “Daddy Santa.”

Fans were quick to comment, with one writing: “Awww so little❤️❤️,” as another gushed: “Cuties 😍.”

Another referred to Robert, who passed away in 2003 from oesophageal cancer, and wrote: “Aw so sad.”

One then surmized: “You were so cutee omggg.”

Kim reflected on the loss of her dad in a post alongside a photo of the father-daughter duo.

The black and white image featured a younger Kim embracing her father as they both smiled at the camera.

Kim wrote a touching caption beneath the photo that read: “18 years ago was the worst day of my life. But I know you see and guide. Love never dies. Love you daddy”

The model proceeded to share several throwback photos of the high-profile attorney before his death, including a family pic of mom, Kris Jenner, and her sisters, Kourtney and Khloe.

Robert passed away in 2003 after a short battle of esophageal cancer.

Last year, Kim’s ex, Kanye West gifted her a lifelike hologram of her father in honor of the anniversary of his passing and her 40th birthday.

In the emotional video, an image of the father-of-four is projected as he praised the star for all she’s accomplished: “The most beautiful thing that I have witnessed is watching you grow your family,” he said.

“You’re beautiful just like when you were a little girl. I watch over you and all your sisters and your brother and kids everyday.”

As Kanye orchestrated the video, he made sure to include some of Kim’s fondest memories with her father.

He next recalled driving Kim to school in his “tiny Mercedes,” where they would listen to Barry Mann’s Who Put the Bomp.

The hologram continued: “I am so proud of the women that you’ve become, Kimberly. And all that you’ve accomplished. All of your hard work and all of the businesses you have built is incredible.

“The most impressive is your commitment to become a lawyer and carry on my legacy.

“It’s a long and a hard road, but it’s worth it and I’m with you every step of the way.”

Robert’s hologram encouraged Kim to “keep doing what you’re doing,” adding: “Know that I am very proud of you and I’m always with you.

“I have built a firewall around our family.”

After telling Kim he loves her, the hologram asked her to relay the same message to her siblings Kourtney, Khloe and Rob.

Kim shocked the world when she filed for divorce from Kanye in February, after seven years of marriage.

Shortly after the filing, she turned to her father for advice while posting a sweet birthday tribute for the devoted dad.

The reality star shared a pic with her father, where she sat arm resting on his shoulder with sisters Khloe and Kourtney and brother Rob.

The mom-of-four captioned her snap: “Happy Birthday Dad! I celebrate you every single day but today even more.

“So much to tell you! I called your cell phone number just wondering if anyone would pick up after all these years.

“I actually can’t believe I remembered it. Please come visit me in a dream soon. 🙏🏼 “

Kim then asked her father for some sort of “sign,” as she currently battles her third divorce from rapper Kanye.

“Also can you pretty please send down a sign in the form of those symbols/birds we always talked about?!?! I just miss you sooooo much!” she asked.

Kourtney Kardashian takes fans inside her $8.5M mansion as she surprises kids with elves after Christmas decor backlash

Showbiz This Is England star Andrew Shim facing JAIL over ‘unpaid £75,000 drugs fine’ after he was caught with 60kg cannabis Theviraltime
Showbiz I deleted my Twitter account Theviraltime
Advertisement