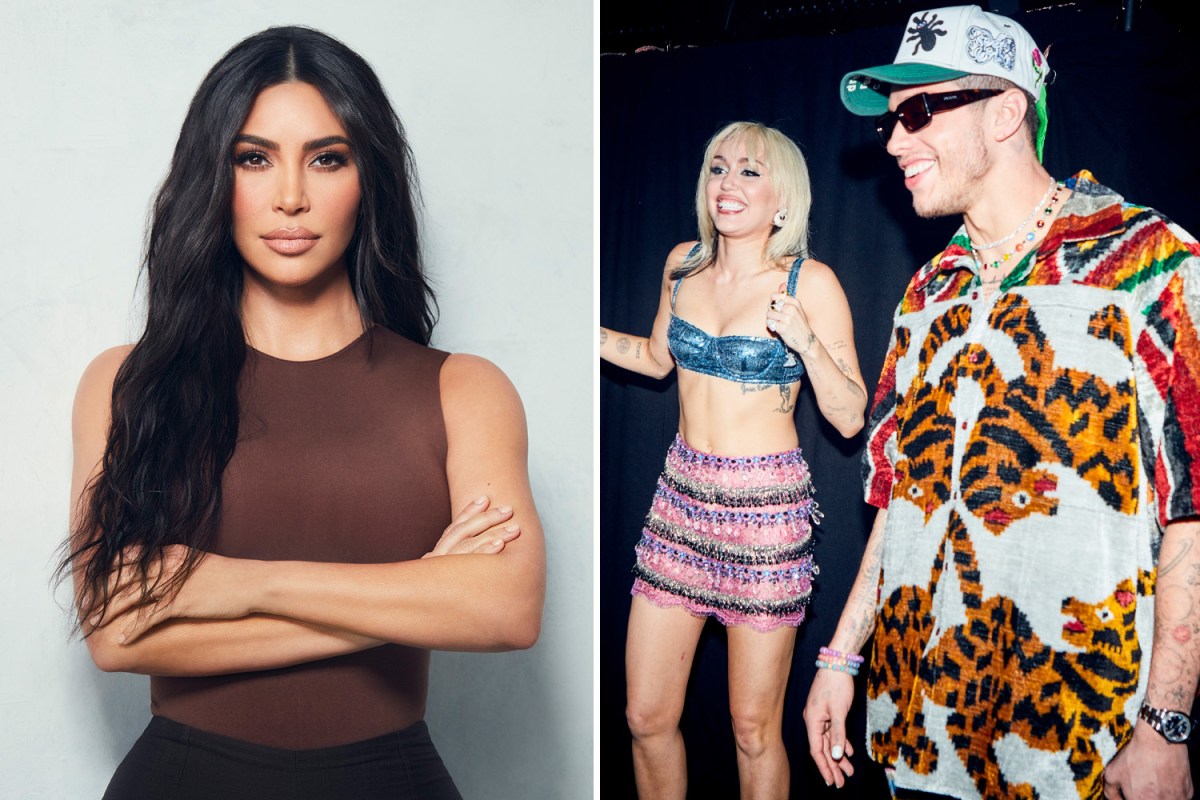 KIM Kardashian is no longer following Miley Cyrus after the singer’s NYE serenade for Pete Davidson during the even they cohosted together.

The KKW beauty founder wasn’t at the event.

Kim appeared to unfollow Miley, 29, after the incident, which took place on stage during the singer’s cohosting gig alongside Pete.

The news was reported by a Miley fan account, @MileyEdition.

According to the account, Kim was following the Wrecking Ball singer as of December 10.

Page Six reported on that same day that Miley was seen at Pete’s condo ahead of the joint appearance on The Tonight Show.

As of Tuesday, Kim is no longer following Miley’s account.

It’s unclear the reason behind Kim’s decision to hit the unfollow button, but it may be related to the serenade she gave the Saturday Night Live star ahead of the ball drop.

The duo appeared on stage together during the show to sing a duet of Will Smith’s Miami.

Miley hinted at a potential romantic interest in Pete while promoting their event on The Tonight Show, singing, “It should have been me.”

Kim and Pete have been seeing one another since October.

The former Keeping Up With the Kardashians star wasn’t there for Pete and Miley’s event on New Years Eve due to an issue getting a sitter.

According to Hollywood Life, Kim asked ex Kanye West to watch the kids so she could go, but he claimed he couldn’t.

She didn’t know at the time that he couldn’t make it because he was going to Miami himself.

Kanye was spotted out on a date in Florida with Uncut Gems star Julia Fox.

He was later seen sharing a hotel room with a topless woman.

A source told the outlet: “Kim was on the fence about going to Miami because she really wanted to be with Pete.

“She knew how much this gig meant to him and how much he wanted her to be there.

“He had asked her [to go to Miami] when they spent Christmas together in LA.

“But when she contacted Kanye to ask if he would be available to watch the kids, Kanye said he wouldn’t be.”

“Because Kanye said he had plans, Kim cancelled any tentative plans she had to go [to Miami] on the 31st.

“Kim always puts her kids first no matter what.”

After she learned that Kanye was going to Miami, she began questioning his motivations.

According to Hollywood Life’s source, Kim was confused as to why the Donda rapper would omit that fact.

The insider said: “She feels she’s being honest and straight forward and pure in her intentions, and he is playing games.

“And just like [his recent] home purchase, her family thinks it’s just a little bit weird.

“She can’t wait until this divorce is finalized.”

As for Kanye’s decision to move in across the street, Kim would prefer he didn’t, separate sources say.

An insider told InTouch Weekly that she isn’t “necessarily thrilled” about it.

The source added: “Kim might have to make some adjustments. I mean, nobody wants their ex living across the street.

“It’s not the most conventional of divorce situations, to start a new life, dating and all that.”

The source added: “[But] he wants to be a constant presence while co-parenting his kids, and for Kanye, that means being as physically close to [their kids] as possible.

“The good this is that the kids are super excited to have daddy closer. [Kanye] does things his way and he wants to be close to his kids, and Kim too.”

Kim filed for divorce from Kanye in February after nearly seven years of marriage.

Pete, whom she’s currently vacationing in the Bahamas with, is the only man she’s been linked to since then.