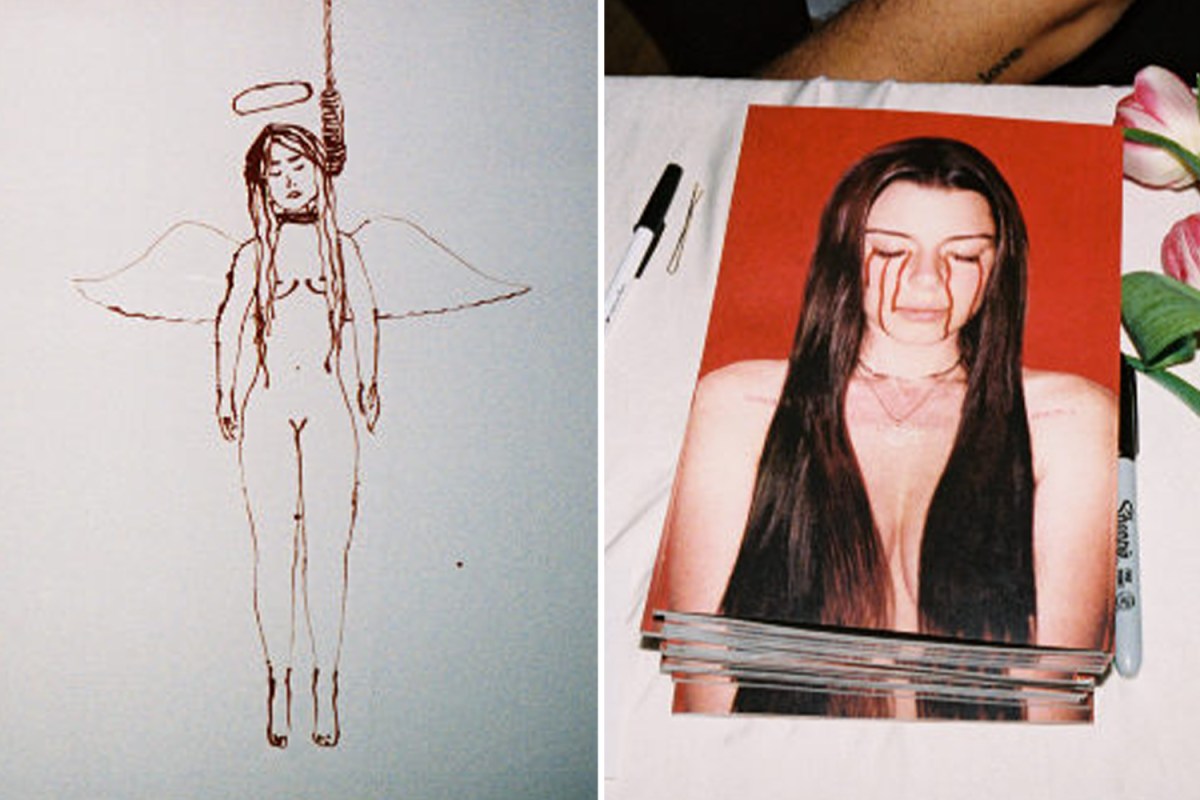 KARDASHIAN fans discovered that Kanye West’s new girlfriend Julia Fox has quite the past, including putting on a 2017 art show using her own BLOOD.

The NYC exhibition was called R.I.P. Julia Fox and in a newly resurfaced interview, she said she extracted the blood with a syringe.

The stars recently made their romance official as they posed together in an extravagant Interview Magazine photoshoot while out and about in New York City.

The original artworks were made using her own blood.

They included morbid self portraits of nooses and the afterlife on silk paper – and blood-smeared polaroids.

The 31-year-old actress opened up about the art show with HUFFINGTON POST when it debuted in 2017, which was rediscovered by wide-eyed internet users in January.

“Yes, it’s my blood,” Julia told HUFFPOST at the time. “I wanted the show to be as authentic and personal as possible.”

“I extracted the blood with a syringe and used the syringe to paint on the silk. It wasn’t as bad as it seems.”

When asked why she chose to use her own blood, Julia said: “I guess I’ve always been fascinated with death. I’ve had a few near death experiences.

“In one particular instance, I saw the infamous tunnel of light and felt my spirit elevate from my human body and shoot into space.

“I was exploring death in all forms, one of them being sacrificial. Death as an offering to the great creator. Energy can only be transferred, it can’t ever die.

She continued, on death: “That’s the one thing we have in common. We are all going to die one day.”

Fans expressed their shock at Julia’s bold 2017 art show in January as her and Kanye’s romance went public.

“Ok so her and Kanye are made for each other,” one Twitter user wrote.

A third, more supportive user chimed in: “[J]ulia fox talking about using her own blood in her art has to be the scariest, most fascinating, and hottest thing i’ve ever heard.”

“I want to stay as far from her as po[s]sible,” wrote a fourth.

JULIA ON HER ‘NEAR DEATH EXPERIENCES’

As Julia touched on in her art gallery interview, she has admitted before that her childhood wasn’t always easy.

Born in Milan, Italy, she spent her early years living with her grandfather and moved to New York City with her father.

Throughout her teen years, she worked service jobs while attending high school

Julia opened up about a near-fatal overdose she had when she was 17, which may have been the impetus for part of her art show.

As she told The Hollywood Reporter in 2020: “It’s kind of a miracle that I’m okay because a lot of the people I grew up with aren’t doing so well.

“They’re still on drugs or in jail. A lot of them died.”

A New Yorker profile from July revealed that the actress is now sober following her past addiction struggles with heroin and pills.

She previously spoke to High Snobiety about what it was like being raised by a single father in New York City, sharing: “He’s out of his mind. I pretty much grew up with him.

Julia continued: “We moved around a lot. It was kind of unstable. We were homeless at one point.

“I actually have lived in almost every single neighborhood — Harlem, Chelsea, everywhere.

R.I.P. Julia Fox was not her first art show. In 2016, she unveiled her debut solo exhibition, PTSD, at Magic Gallery in NYC.

Julia and Kanye recently confirmed their blossoming romance with an intimate photoshoot during their second date in New York City.

The couple saw Slave Play together on Broadway and had dinner at Carbone.

Kanye was previously married to Kim Kardashian, 41, from 2014-2020, and they share four kids together: North, eight, Saint, six, Chicago, three, and Psalm, two.

Kim has since moved on, and is dating Saturday Night Live comic Pete Davidson.