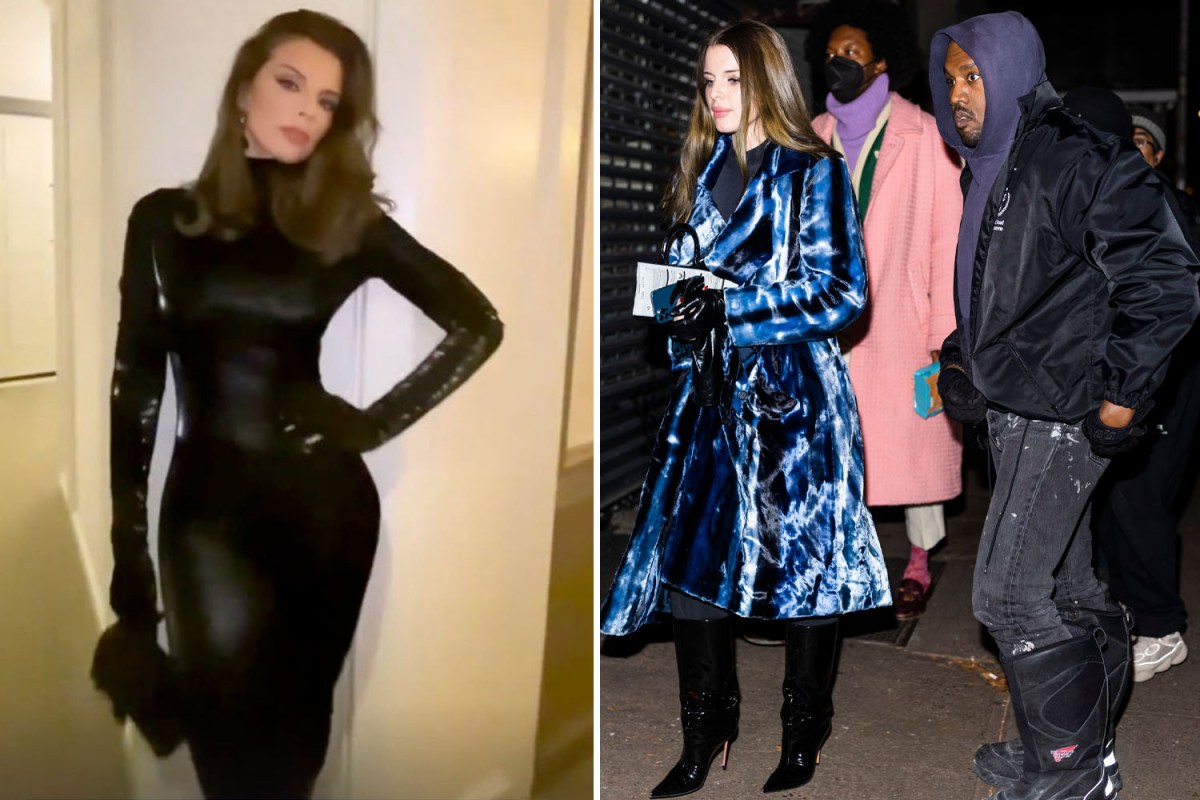 JULIA Fox posed on her Instagram Story wearing a body-hugging leather catsuit after boyfriend Kanye West was accused of punching a fan in the face.

The pair were first linked on New Year’s Eve.

Julia shared the look on her Instagram Story, posing in front of a white wall.

Rap music played in the background as she struck several poses.

The sexy black catsuit covered her from her neck down, including her finger tips.

Julia’s curves were on full display in the outfit, which hugged her in all the right places.

She paired the outfit with black boots and a black purse and wore her brown hair loose, grazing her shoulders.

The outfit was strikingly similar to another Julia wore while out and about with Kanye.

Julia seemed to ignore a recent controversy surrounding her beau, who has been accused of punching a fan.

The Uncut Gems star stepped out with Kanye on Wednesday wearing low-rise leather pants and a leather crop top.

She again paired the outfit with a black purse and black boots.

Julia was seen on Kanye’s arm in Los Angeles sporting the daring look.

The couple visited Delilah, where they hung out with Madonna and Antonio Brown.

They were photographed kissing throughout the night.

The date was one of many Julia and Kanye have been on in the two weeks since their first sighting.

The couple was first spotted together at Carbone in Miami.

Days later, they took their romance up north, hanging out in New York City.

The couple saw Slave play and again dined at Carbone.

Kanye arranged a photoshoot for Julia and surprised her with a hotel room full of clothes.

The photoshoot was included in Interview Magazine.

Julia gushed about her new beau to the outlet, revealing that he arrived in New York an hour before the play and still made it on time.

Julia again gushed about Kanye during a podcast episode.

Her co-host, Niki Takesh, confessed that she had been approached about the budding romance between her friend and Kanye.

She noted that several people questioned whether the romance was legit or not.

“There’s always people that think every celebrity scandal is a set-up,” the actress said.

Niki chimed in: “People are like, that’s only the second date? And I’m like, ‘Clearly you haven’t dated a billionaire before because I went on a date with a billionaire and he’d already transferred me $8k.’ I don’t even think he’d gotten my name yet, just my account number and routing number.”

As for what’s going on with her and Kanye, Julia said she’s taking things as they come.

She said on the podcast: “Right now, I’m just living in the moment.

“I don’t have any expectations. There’s no labels, there’s none of that. It’s just people that make each other feel better.

“It’s really such a Gemini, Aquarius connection. It’s very inspirational. We both work very fast, we keep up with each other, which is cool.”

Julia added: “What’s really exciting about him is that any idea can become a reality. Anything is possible.

“He’s such a doer. He’s really a genius. And it’s honestly just an honor to be in the presence and to witness history happening, to being the studio with him and Future and listen to the new songs, which by the way are f**king insane.”

Asked why people are fawning over their romance, Julia said: “Maybe because I’m not the most obvious choice. Maybe because I came out of left-field.”