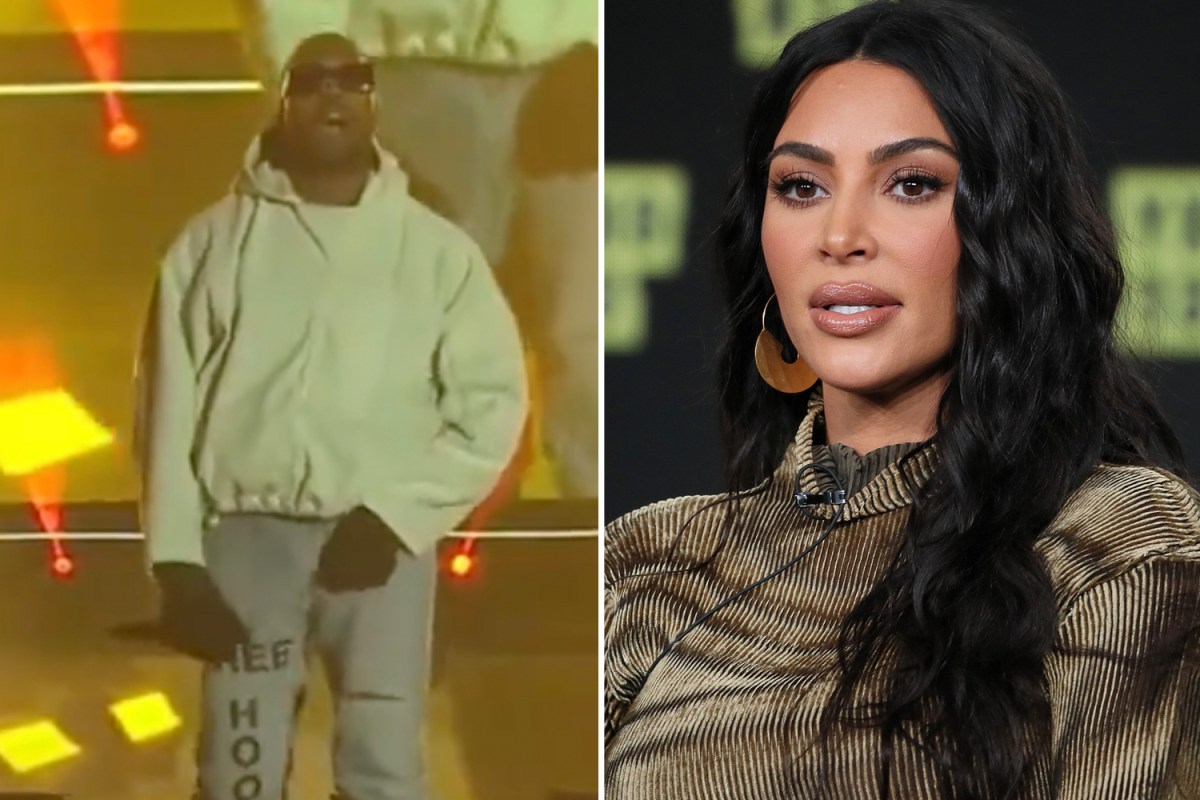 KANYE West rapped about his ex Kim Kardashian AGAIN during a surprise Rolling Loud performance after declaring his love for her on stage at his concert days earlier.

The rapper begged for Kim to “run right back” to him at a recent show, “embarrassing” her in front of their children.

Kanye, 44, took the stage again for an impromptu performance at the hip-hop festival in California on Sunday, showing that his ex is still on his mind.

The singer/songwriter shocked festival-goers with his appearance alongside Future, before belting out a solo performance of his hit, Hurricane.

The song is notably known as the track where he confessed his alleged infidelity to Kim, writing in the song: “Here I go with a new chick… Still playing after two kids.”

According to Page Six, Kanye “betrayed” Kim and cheated while the couple were together as he struggled with alcohol abuse.

An insider said: “The song is in a way his testimony of everything he did wrong and taking accountability for the marriage breakdown.”

“If you look closer to the lyrics he is referring to his infidelity during his marriage with Kim, even after two kids,” a second source added.

Prior to the song’s release, Kim was supposedly disputing her decision to divorce the father of her four children.

However, these days, there seems to be no debate as Kim immediately filed to become legally single from Kanye after his concert pleas.

At the start of this year, Kim, 41, started to file divorce from Kanye, but the two still aren’t officially single yet.

An insider confessed to Hollywood Life: “This is absolutely true regarding Kim filing documents to become legally single and change her last name back to just Kardashian.”

The source continued to say that Kim met her final straw after Kanye’s concert with Drake this past Thursday night.

They reported it was “as soon as he put her on the spot and embarrassed her in front of their kids and her family by saying, ‘Run back to me Kimberly.'”

Kim was present at the show with her kids Saint, six, and North, eight, along with her sister Kendall Jenner.

The insider said Kim “needed to take action right away” and called her lawyer.

They said: “She didn’t see any other choice. Kanye is not only upsetting Kim and her family, but he is confusing their children with the things he is saying her.”

Hollywood Life’s source said that with Kim’s children getting older they can now “understand what he’s saying and what is going on.”

By becoming legally single, Kim’s marital status can change while she and Ye continue to work on the other details of their divorce: things like child custody and property division.

The mother-of-four reportedly also asked to drop the name West and return just to her maiden name, Kardashian, despite a source announcing over the summer that Kim had no plans to change her name.

In October of 2021, Kim purchased the home she and Ye had shared with their children, in a buyout for around $23million.

Kanye took the route of changing his name before Kim, legally becoming “Ye” after a judge approved his August 24, 2021 request.

The aspiring lawyer has since moved on with comedian Pete Davidson, and Kanye is allegedly dating model and Instagram influencer, Vinetria.

However, the hitmaker hasn’t given up on keeping his marriage intact as he has repeatedly insisted his family will get “back together.”

In a now deleted video to his Instagram, Kanye can be heard performing a spoken word piece for Thanksgiving where he admits his “misactions” and how he wants his wife back.

The ‘Thanksgiving Prayer’ video shows a choir dressed in hoodies in a dimly lit warehouse, as Kanye’s voice booms over the images.

“All I think about every day is how I get my family back together and how I heal the pain that I’ve caused,” he said in the prayer.

“I take accountability for my actions. New word alert: misactions. The one thing that all my successes and failures have in common is me.”

Kanye also admitted that coming off his medication for bipolar disorder “left me susceptible to other episodes, which my wife and family and fans have had to endure.”

Despite Kanye’s emotion in the prayer, Kim is reportedly angry with the rapper because he has not expressed any of these things to her behind closed doors.