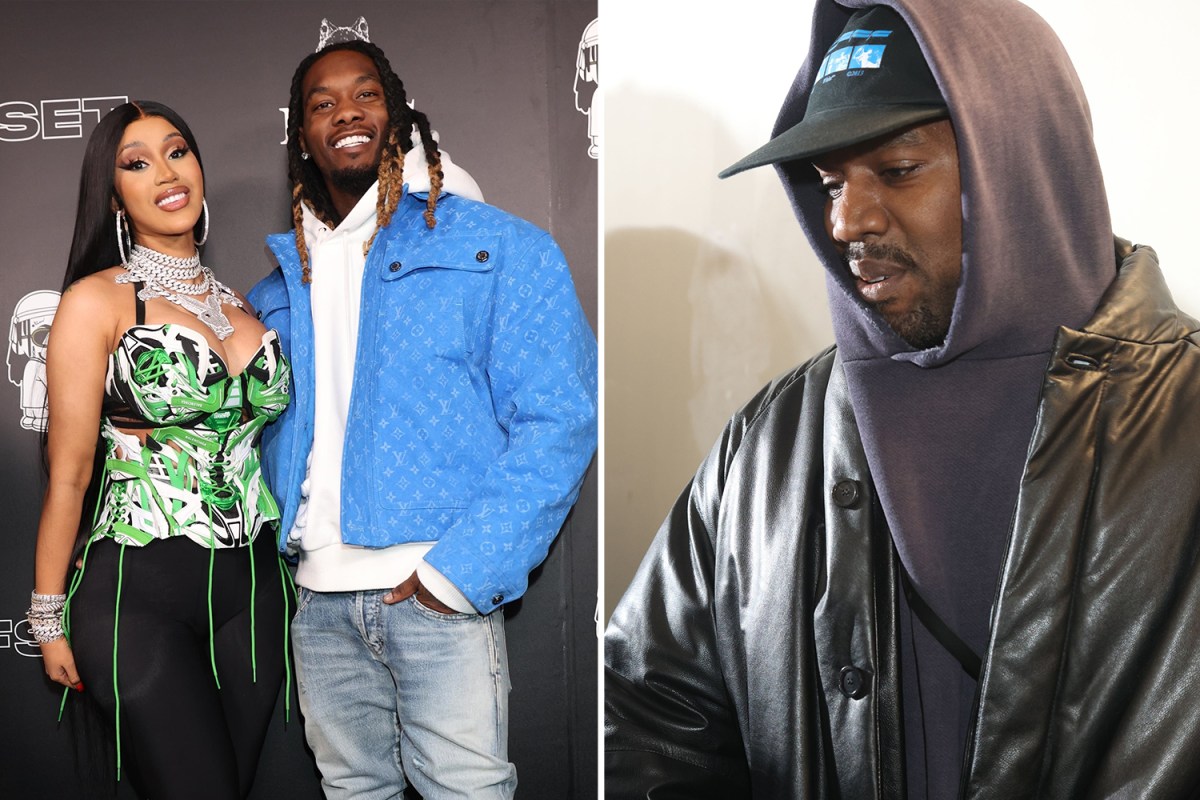 Even while celebrating the American rapper’s birthday with other celebrities, a smile was hard to crack out of the downtrodden Kanye.

Kanye, 44, appeared glum as he entered the star studded celebration.

The rapper wore his hooded sweatshirt over a baseball cap with a coat layered on top.

His face had a serious expression, despite Cardi B throwing down for Offset’s 30th in Los Angeles.

NLE Chopra, Quavo, Takeoff, G-Easy, and others were in attendance, but Kanye remained stoic.

However, when Cardi B presented Offset with his $2,000,000 check, this seemed to get a smile out of the rejected rapper.

Kanye hasn’t been taking the news of his ex Kim Kardashian moving on since their divorce with striking up a new romance with the SNL comedian Pete Davidson.

Days earlier, Kim and Pete enjoyed a night out in his native Staten Island.

They were seen at the Atrium Stadium Cinemas and were joined by Scott Disick.

Their steamy date night continued as they had dinner and “champagne at a private room” at Angelina’s restaurant.

Although he hasn’t addressed his estranged wife’s romance, he has made several public pleas for her to come back to him.

Kim hasn’t responded, but shortly after one of his more public displays of affection for her she did file to become legally single and drop his surname.

While she may no longer be Kim Kardashian West, the former Keeping Up With the Kardashians star hasn’t changed her iPhone username.

She shared a glimpse at her car music playlist via Instagram Stories on Monday, showing her Apple username on the screen.

Her iPhone 13 Pro Max showed up as “KKW” as she listened to Adele’s new song, Woman Like Me.

After Kim filed to become legally single amid her divorce, sources revealed that the rapper “embarrassed her” with his public pleas.

During a Drake benefit concert, the rapper crooned: “I need you to run right back to me” adding, “More specifically, Kimberly.”

Kim filed for divorce in February. At the time, she and Ye had been married for almost seven years.

Pete confessed he is “nervous” about a run-in with Kanye at Kim’s family’s Christmas Eve bash.

A source exclusively told The Sun: “Kim and Pete are are looking forward to spending time together over Christmas and New Year, they’ve been having so much fun.

“He has been invited to Kris’ annual Christmas Eve party, but is reluctant to go and nervous because he knows how much the family loves Kanye- and how hard he’s finding the split.

The news comes as:

“Kanye has also been invited, and has made it known he wants Kim back and for them to work on their marriage. Nobody knows if he’s definitely going to show yet.”

The insider added: “Pete doesn’t want to get in the middle of things but he also wants to spend time with Kim and the family, they all adore him.”

The Sun has reached out to Kim and Pete’s reps for comment.

They said: “She’s really excited about having him around and Kris is already obsessed with him.

“The whole family is a fan of Pete’s and would love to spend a holiday with him.”

The source continued: “Kim and Pete have many upcoming plans and things are going really well.

“She has even considered going to support him in Miami for New Year’s. He has told her he’d love for her to be there,” they added, referencing Pete’s hosting gig for Miley Cyrus’s New Year’s Eve party.”