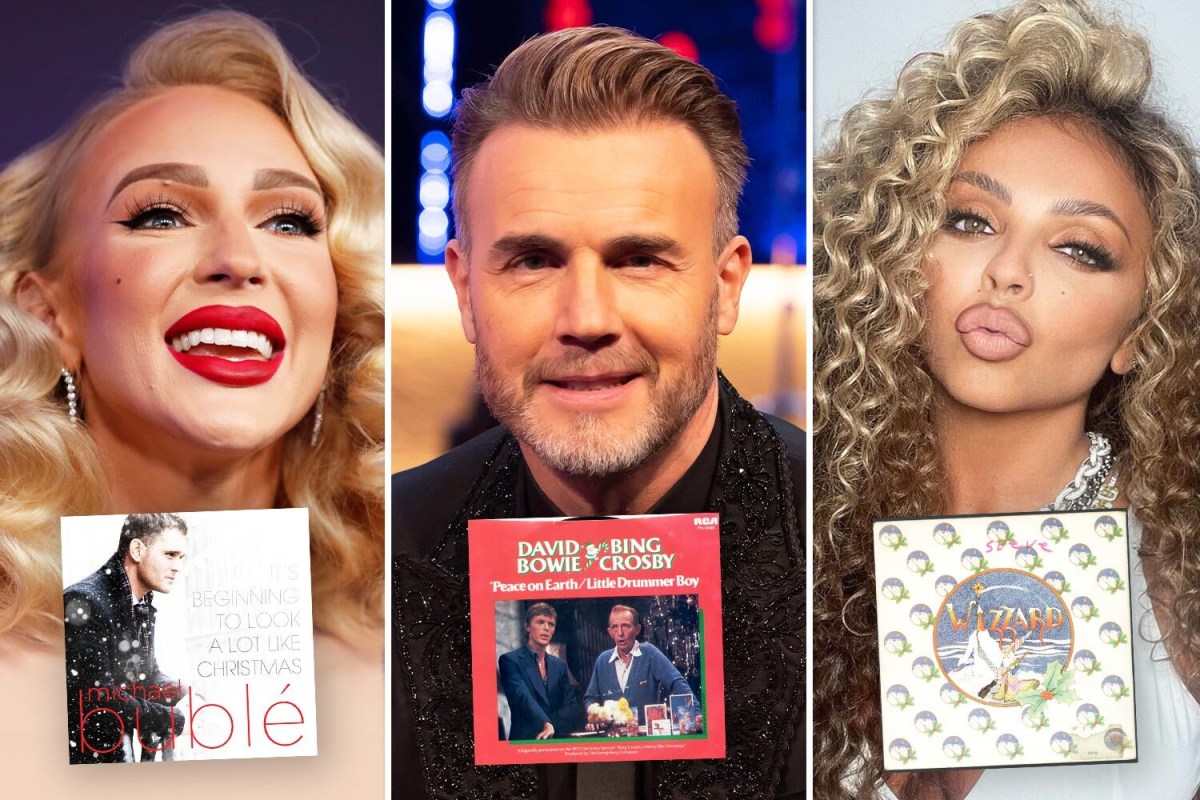 IT’S the time of year where Christmas hits are blasting out wherever you go.

And, of course, celebs and Sun writers have got in the yuletide spirit too. From Bing to Bublé and Bowie to – er, Pinky And Perky – they share their top five festive hits with Katy Docherty, Kate Jackson and Thea Jacobs.

All I Want For Christmas – Mariah Carey

As soon as I hear the first few notes of this song I know it’s the Christmas season. It makes me feel so happy and nostalgic when this comes on.

This song makes me feel warm and fuzzy inside, it’s just so heartwarming and Christmassy. It makes me think of my family and us being together for the holidays.

An iconic and timeless Christmas song. It makes me feel emotional but I can’t help playing it. It’s beautiful.

This is one I put on full blast when I’m getting ready with my mates for a Christmas night out.

I Wish It Could Be Christmas Everyday – Wizzard

A classic, fun Christmas favourite. Reminds me of Christmas when I was growing up, everyone together and having fun and playing party games with classic festive tunes playing in the background.

Fairytale of New York – The Pogues

What a song. It’s so honest and raw – and really sad. Any song that makes you see a visual is always high on my list. You can just see them singing in a cold New York City.

I was the biggest George Michael fan. I only met him a few times but wow, that voice and that music. Again, quite a sad lyric, but it washes over you and you strangely feel quite happy listening to it. No Christmas should be without it.

Bowie was so cool he could even make Bing Crosby cool. It was a totally unexpected partnership which makes it so, so special. It’s a beautiful song with Christmas traditions at its core.

A bit of a new classic really and it’s Chris Rea at his best. It’s an awesome song about something we all do – that final drive at Christmas. It’s so feelgood, Mrs B and I love to dance to this one.

It’s Beginning To Look A Lot Like Christmas – Michael Buble

I have to include a song from Michael. He’s been the face of Christmas for the past ten years. Congrats to him and his interpretations of Christmas classics. That voice is like a big ol’ hug.

Gary’s single The Dream Of Christmas is out now.

It’s Beginning To Look A Lot Like Christmas – Michael Buble

His voice is intoxicating and so reminiscent of Frank Sinatra. It transports me to a different era.

I love anything my Queen Ariana does. She just can do no wrong. This song really lifts my mood and I love her vocals.

My lifetime idol, I love her voice and she demands mad respect.

My Only Wish (This Year) – Britney Spears

My pop princess icon, this transports me to my teen years and makes me feel so happy.

I used to listen to this with my family. It brings back warm memories.

Last Christmas – Wham! It’s a Christmas song but it’s all about heartbreak. What a gifted songwriter George Michael was. It’s for people that are kind of Christmas harrumphs like me.

Once In Royal David’s City

As a good Jewish person that used to be in the choir, I would just be silent when the word “Jesus” came up. You can delight in midnight mass for the sheer beauty of this song – even if you know your rabbi might be a little bit upset.

Dance Of The Sugar Plum Fairy, The Nutcracker – Tchaikovsky

It’s playing every day at the panto I’m in – Snow White in Bristol. There’s something about 1,500 to 2,000 children at a matinee who are completely swept up in the magic of Christmas.

It’s not a festive song but the 1984 Eurovision winner always makes me smile. It was the tune I woke up to last Christmas, on purpose.

Anything from the Pinky and Perky Christmas Album

Apart from carols, this was my first exposure to Christmas songs. P ’n’ P transport me back to the early Seventies, when I was thrilled about every aspect of Christmas.

I’m sure it wasn’t until after John was shot that I heard this beautiful song. It’s the greatest of all Christmas tunes.

Once In Royal David’s City

I must have been about 13 when we heard an angelic voice singing it outside our front door. I was gobsmacked to see the school bully there sounding like he’d descended from heaven. He eyed me threateningly as he sang so beautifully, making it clear of the consequences if I breathed a word of his hidden talent.

Never mind the famous one, this is my favourite seasonal song from Slade. A real singalong. Knocks Merry Christmas Everybody into a cocked Santa hat.

Everyone needs a Christmas song no one else has heard of. I love this.

This is 100 per cent guaranteed to give me goosebumps, especially when the descant harmonies kick in for the last verse. The popular Christmas carols are all basically just really good pop songs.

Just about every pop star in history has had a go at writing a Christmas tune and Kate is no exception. This is my current favourite, even though it’s from the late Seventies. There’s just a hint of sadness there but it’s really uplifting.

Features some extremely jazzy chords but great to sing along to. It’s always my go-to after a couple of snowballs. I get a little bit better at playing it every year.

Dance Of The Mirlitons, from The Nutcracker – Tchaikovsky

I take my daughters to see Tchaikovsky’s festive ballet The Nutcracker every year and I swear it gets better every time I see it. You will know this tune – it’s the one from the Cadbury’s Fruit & Nut advert. Pure genius.