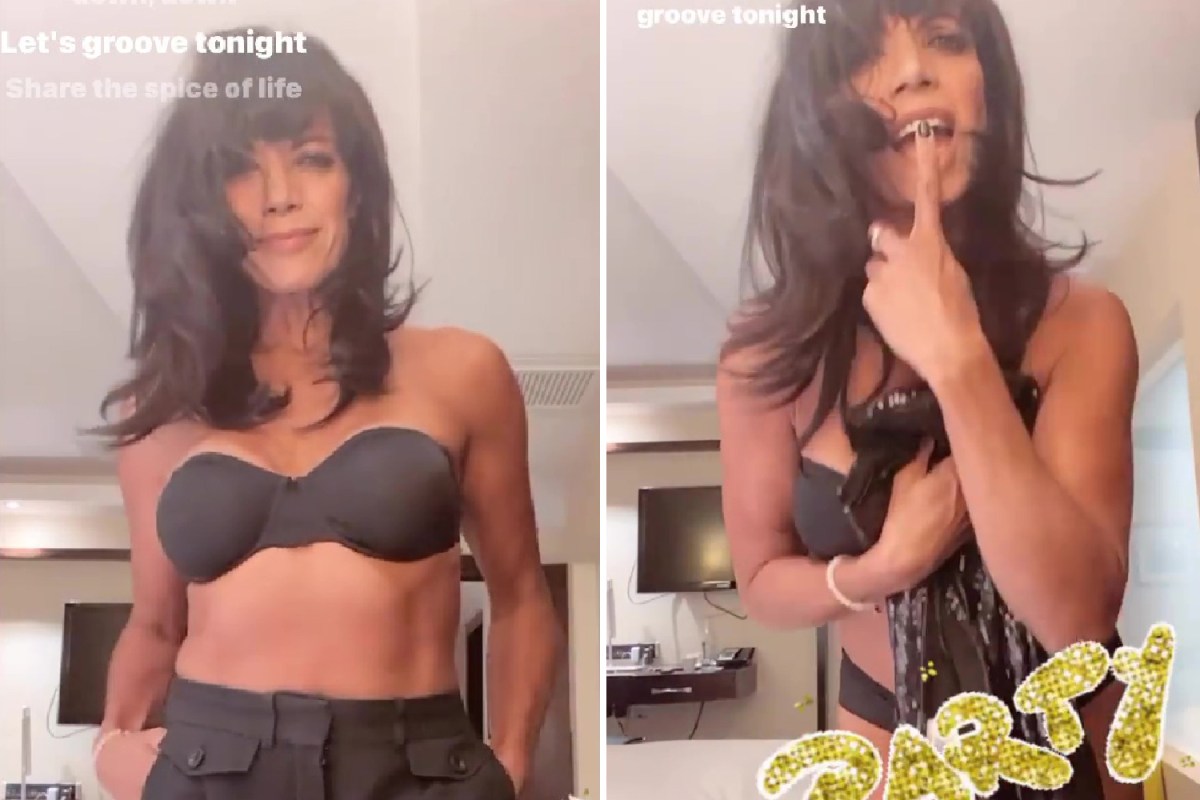 JENNY Powell showed off her sensational figure as she posed in black strapless bra.

The former Wheel of Fortune game show host, 53, gave fans a glimpse of her toned abs and trim waist.

Beaming at the camera, Jenny posed up a storm as she treated fans to some of her outfit choices for New Year’s Eve.

She sported a pair of high-waisted black trousers and a strapless black bra and captioned the clip: “Just thinking..NYE outfit”.

The TV favourite then stripped down to just her underwear before changing into a sparkly jumpsuit.

Keeping her brunette tresses in loose waves and her makeup palette neutral, Jenny shared another clip of her modelling a silver sequin off-the-shoulder ensemble.

Looking glamorous, the stunning outfit accentuated her long legs and showed off her toned arms.

The TV personality kept her followers entertained as she danced around in her skimpy outfit while preparing for celebrations tomorrow.

Jenny, who has never been shy when it comes to sharing bikini snaps, revealed that she is always gets mistaken for her 20-year-old daughter Connie’s SISTER — despite their 33-year age gap.

She told The Sun on Sunday how she adores the confidence boost, and joked: “I do get called Benjamin Button — every year I get a bit younger.

“Being called your daughter’s sister is very flattering. We once checked into a hotel on holiday and the guy behind the reception desk said, ‘Oh, look at you two sisters. You look so alike’.

“Connie said, ‘She’s my mum’. I think she loves it but hates it as well. When she was in the sixth form it was going round the boys that ‘Jenny Powell is a hot mum.'”

At Christmas 2010 Jenny’s life was turned around when she bumped into sports therapist Martin Lowe while getting a coffee at London’s Euston station.

The pair are now engaged. She recalled: “We met in Pret A Manger and I’d been to a Christmas party. I had false eyelashes. One was hanging off my eye — I was looking irresistible.

“Then this guy walked in and I thought, ‘He’s dead fit, he is’, then he sat opposite me. He went, ‘Do you want my number?’ He proposed about four years later in New York.”

Jenny, who is seven years older than Martin, added: “When we first met and Connie was about eight or nine she said to me, ‘Mum, I think you’re a cougar’. And I was like, ‘What?’ I had to look it up and apparently I’m not officially a cougar as there has to be a larger age difference than there is between Martin and me.

“I don’t know what’s stopping us getting married — maybe because we want to get married abroad. He’s never really lived with anyone and he’s quite a free spirit. Or he was before.”

Jenny — who is the star of a hit podcast interview called The Hot Mess Mums Club, where she interviews celebrities about being parents — left Wheel of Fortune almost 20 years ago.

Jenny shot to fame in the late Eighties on kids’ TV show Gimme 5 and Top Of The Pops before making her mark as the “glamorous assistant” to Nicky Campbell and then John Leslie on Wheel Of Fortune from 1995. The ITV quiz programme was watched by more than eight million viewers.