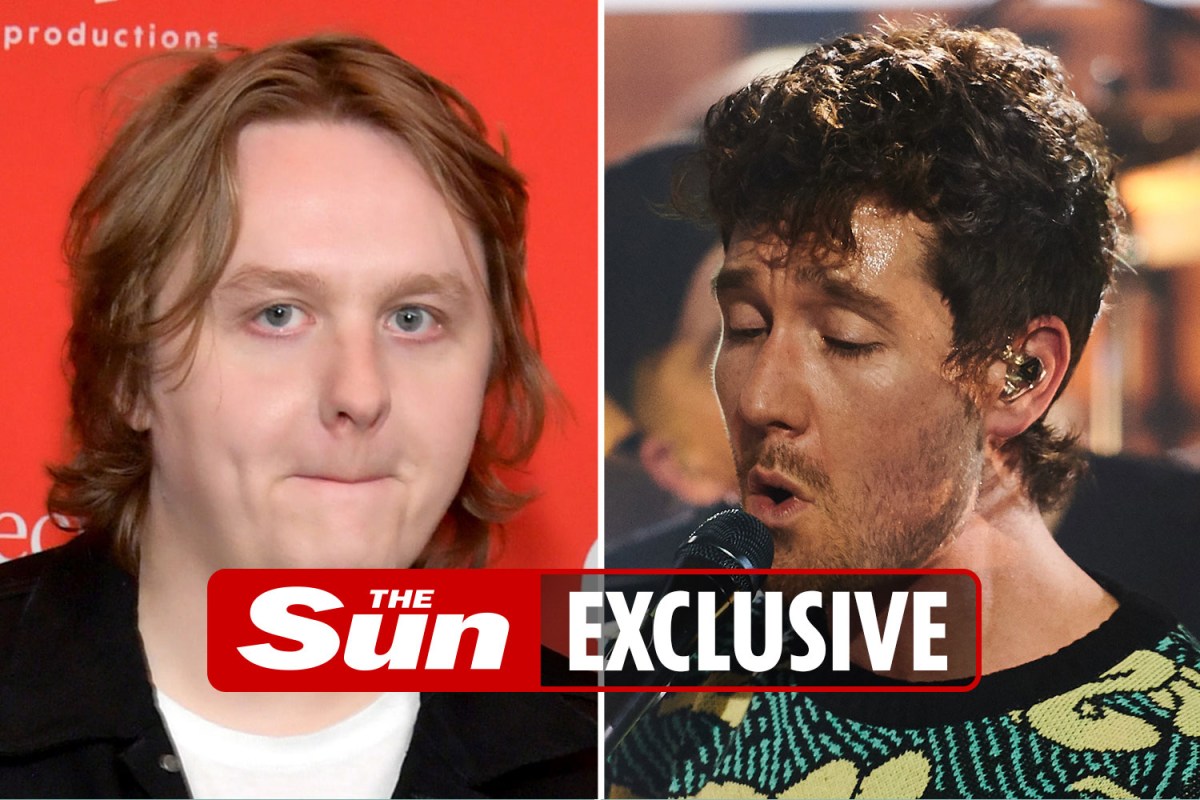 BASTILLE have had three hit albums and are now using their skills to help someone else top the charts again – Lewis Capaldi.

The British band’s frontman Dan Smith has revealed that he has been in the studio with Scottish star Lewis, who supported them on tour in 2019, and it could lead to a collaboration.

In an exclusive chat, Dan said: “I did some writing with him and it was really great to see him.

“Obviously he has had the most amazing time and I think he is just taking his time writing lots of music and living his life.

“We f***ing love Lewis and we’re so proud of everything he’s done all over the world. It’s exciting to see what he’s going to do next.”

That’s not the only person Dan has been penning tunes for though, as he revealed he almost cracked the code in writing a song for Rihanna — but fears he may have fallen at the final hurdle.

He admitted: “There were a couple of songs that I heard that her team liked for a minute.

“I imagine with that project, they hear and work on so much music and will just know when it’s right.

“There was a minute last year where I thought I’d done it. But I don’t think it’s happened.”

While that may not have worked out, Bastille — made up of Dan, Kyle Simmons, Will Farquarson and Chris Wood — are still going from strength to strength and had the honour of recording an MTV Unplugged special, which will air on MTV at 9pm next Thursday, December 23.

Thankfully it was recorded weeks ago though, as Dan is now stuck inside.

Speaking over Zoom, he told me: “I am isolating at home. I’ve got Covid. I’m fine but it’s the second time I’ve had it.

“It seems to happen to me every year at Christmas time.

“The ten-day isolation finishes next week so I will be able to spend Christmas with my family.”

But Dan is chuffed with how the band’s MTV special has turned out and it has even given him some inspiration for their fifth album, following the release of Give Me The Future on February 4, 2022.

On the topic of recording it at London’s Porchester Hall last month, Dan — who teased they were joined by a handful of special guests — said: “We saw it as a new challenge and tried to nod to each album that we’ve made, the mixtapes and some covers.

“The whole thing made us think about the music we will be making in the future.

“We’re about to release an album which is very electronic, thinking about the future and technology.

“So in and amongst that, to have this two- week break to go in the opposite direction and only play acoustic instruments, was an interesting counterpoint to everything we’ve been up to.”

Their upcoming album will be unlike anything they have done before too, as it is completely inspired by science fiction movies.

Dan added: “It was helpful to think, ‘OK, we’re making a sci-fi album, so let’s go there musically, collaboratively, and thematically.’

“All the songs stand up individually but there are a lot of lyrical themes that run all the way Theviraltime.”

IF WILL Smith ever wants to remake Men In Black then I may have just found his new stars.

Rita Ora and boyfriend Taika Waititi looked like they had come straight from the alien-fighting agency as they graced the red carpet for the Australian movie premiere of Being The Ricardos, in Sydney.

Never one to shy away from sexing up her look, Follow Me singer Rita opted for a backless mini dress with crystal straps.

While staying Down Under, Rita will return to the small screen here in the New Year when ITV’s The Masked Singer kicks off again.

She jetted to London in October to film the show in secret.

I can’t blame her for flying out somewhere warmer as soon as she was done, though.

HE beat the odds in 2018 when he became the festive chart-topper with spoof tune We Built This City.

The YouTube sensation’s sausage roll-themed hit was a parody of the Starship song of the same name – then he was also Christmas No1 in 2019 and 2020, with more pastry-themed numbers.

Now Ladbaby – real name Mark Hoyle, who performs with his wife Roxanne – is at it again and looks a cert to claim the spoils for a record fourth year with charity single Sausage Rolls For Everyone.

The race kicks off today, with the winner to be announced on Radio 1 on Christmas Eve.

So far, the bookies have LadBaby well ahead.

His track is a spoof of Sir Elton John and Ed Sheeran’s contender for this year’s festive No1, Merry Christmas, which is his main competition and has already been topping the charts for a week.

He has even got Elt and Ed to put aside chart rivalry, in the name of charity, to sing alongside him on his track.

Bookmaker William Hill gives the song odds of 1/8 to be No1 this yule-tide, while Elton and Ed are 5/1.

While LadBaby is raising funds for food bank charity The Trussell Trust, another charity single, Laura’s Gone, by podcast Have A Word, has been released in aid of two kids’ charities.

Wigan band The Lathums’ anti-festive track Krampus has the same 33/1 odds as Mariah Carey’s All I Want For Christmas Is You.

LadBaby would be the only act other than The Beatles to have four Christmas No1s – and no one has done it consecutively.

Unlike my Christmas shopping, it looks like he’s got it all wrapped up.

Simon is staying on the Line

SIMON Cowell pulled out of appearing in his ITV show Walk The Line, but he has constantly been in touch with Gary Barlow since the Take That star replaced him.

The singer said: “Simon’s at it every day. He’s the show creator, and as I’ve created shows myself, I know you’ve got to be all over everything.

“But he’s the master. He’s the most successful show creator of the last 20 years, so if he’s got suggestions, everyone should listen.”

The show finishes tonight and Gary said working on it was the most fun he’d had in years.

He added: “This show has everyone on the edge of their seats. The lovely thing for me is that I’m with all my friends on the panel. Dawn French, I’ve worked with many times.

“Alesha Dixon is a really close friend of mine and Craig David and I are having a great laugh together. We’re not in competition, we are all there to give support and be constructive.

“It’s a lovely atmosphere and I think it’s what we need on TV right now – something really positive.”

LEIGH-Anne Pinnock’s accountant will be singing a Sweet Melody after she earned nearly £1million last year.

Despite the pandemic putting paid to their planned Confetti tour, which will now take place in the spring, accounts for Leigh-Anne’s business Made In The Nineties recorded a £500,000 profit.

In contrast, her former Little Mix bandmate Jesy Nelson made just £77,901 in profit for the same time frame – with her business having £169,000 in the coffers.

The music icon showed off a bold look from her new Halls Of Ivy collection with this snap.

Proving if you need a job doing well then you should do it yourself, Bey modelled her own collection.

Speculation is mounting that the superstar has completed work on a new album for next year.

Singer Leon Bridges hinted at the news on Instagram after sharing a message from a friend, who said the Hold Up singer had been choosing vinyl colours for a new project.