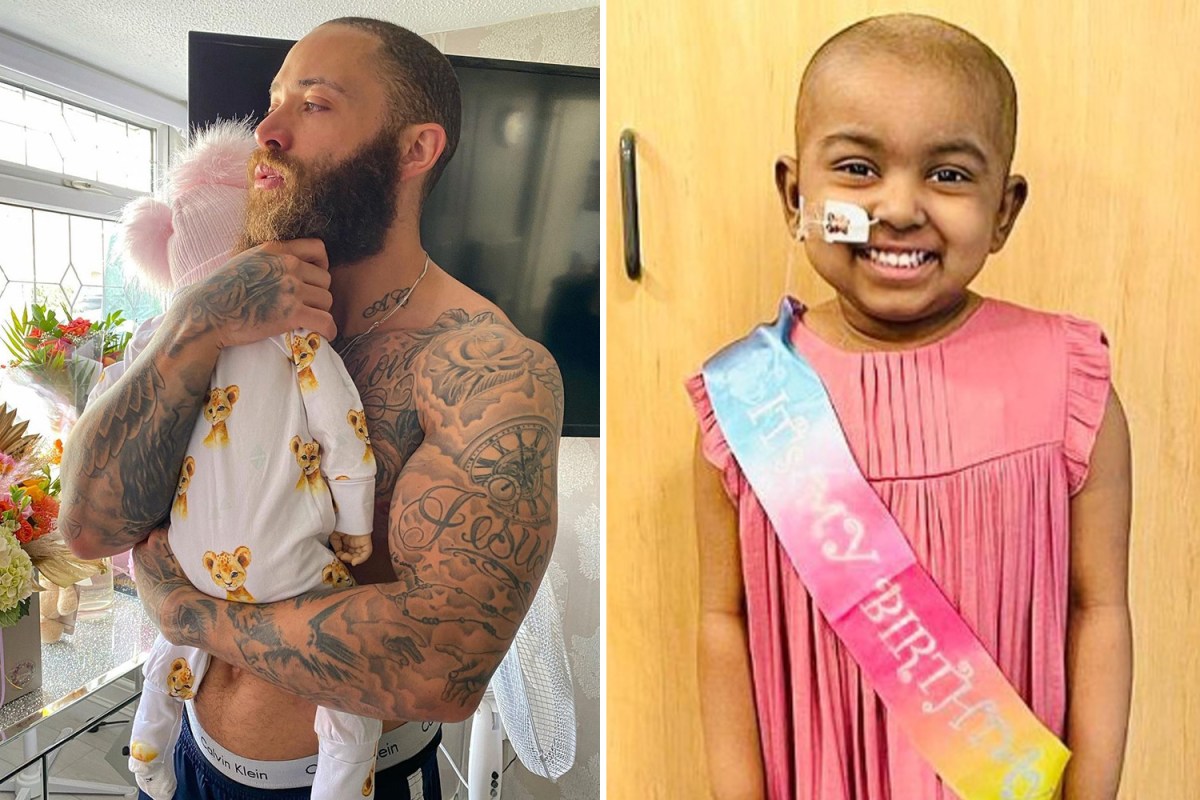 FOOTBALLER Ashley Cain has offered his support to the parents of a five-year-old girl battling the same cancer that killed his baby girl Azaylia.

Former reality star Ashley and girlfriend Safiyya Vorajee were left devastated when they lost daughter Azaylia in April last year at just eight-months old after she was diagnosed with acute myeloid leukaemia.

In a bid to channel their unimaginable grief, the heartbroken couple set up a foundation in her name to help other sick children and pay tribute to those who tried to save her life.

Ex-Coventry City winger Ashley and Safiyya have now thrown their support behind a couple whose five-year-old daughter Esha Nadeswaran, who has the same blood cancer Azaylia suffered, reports the Mirror.

The couple met little Esha – who has been in hospital since last May – after her parents Rishya and wife Kavitha appealed to members of the South Asian community to volunteer to be stem cell donors.

After spotting the appeal, Safiyya reached out and offered her and Ashley’s support.

Esha’s dad Rishya, from North East London, told the outlet: “I arranged a Zoom chat with Safiyya and Ashley and I spoke father to father about what it feels like to be told your child has cancer. It was very emotional.

“Esha is our absolute hero and she is incredible. With our journey, it is like a marathon with no finish. We don’t know when it is going to end and so we can’t even pace ourselves.”

Rishya says listening to Ashley open up about how vulnerable he felt “really struck a chord”, and says their chat has “kept him going”.

“There have been days where I’ve gone to bed, crawled up and cried alone,” he added.

“But no matter how bad a day you are having and how much you hurt inside, Ashley reminded me you must stay positive and happy for your child.

“He told me not to think too far ahead and do whatever I needed to do to support Esha. It’s horrible to be told your child has cancer.”

Esha’s parents have been made tough sacrifices as their young daughter battles gruelling chemo and other treatment.

To keep her safe, they’ve formed a Covid bubble – meaning they have had to live apart from their other daughter, 10-year-old Ria, who has been living with her grandparents, seeing her mum and dad once a week at arm’s length.

“My wife and I take it in turns to stay with Esha. The Young Lives vs Cancer charity has kindly been able to offer accommodation for the other to stay nearby.

“We have been locked in this bubble for months now and it’s exhausting.”

Ashley this month told The Sun that keeping his late daughter’s legacy going has helped keep him alive in the wake of her death as he vowed to continue fundraising to help other families whose children have cancer.

Azaylia had been diagnosed with acute myeloid leukaemia when she was eight weeks-old.

While her life was cruelly cut short, the tot’s diagnosis and subsequent fundraiser got worldwide attention and a staggering £1.6million was raised in her name in just a few days.

And Ashley says continuing this is now his life goal, with the next challenge a huge charity bike ride in June where he and Safiyya hope to raise thousands for The Azaylia Foundation.

Ashley said: “Exercise and doing this bike ride is something that has kept me here.

“I have struggled a lot and I struggled to find a purpose after Azaylia.

“Raising funds and doing these challenges has given me a purpose again. I feel like I am doing something.

“It is a way for me to release endorphins so I can just get Theviraltime every day.”

Safiyya added: “You don’t see how much people are suffering.

“Going out and wearing a smile when you feel broken is really hard. We have a purpose, we want to make a change.

“There is so much we do, privately as well as publicly. We speak to so many families behind closed doors and we try and support them on a daily basis.”

As well as dishing out lump sums of cash to help individual cases – and taking part in different challenges to help children – Safiyya said the money raised has also helped buy life-saving equipment.

She explained: “The Azaylia Foundation has bought equipment which helps research into bloods and can process ten children an hour.

“Previously in the lab they could only do two children a day. The community achieved this.”

The pair now want the community to come together again for a huge cycling event in Cambridgeshire on June 4 and 5.

Thanks to the help of Tour of Cambridgeshire, Ashley and Safiyya have put on the fundraiser which everyone can get involved in.

To take part in Cycle for Azaylia event visit www.cycleforazaylia.com

Showbiz What is Susan Lucci’s net worth? Theviraltime
Suggestion to watch In From The Cold heats up Netflix by defying expectations Theviraltime
Advertisement