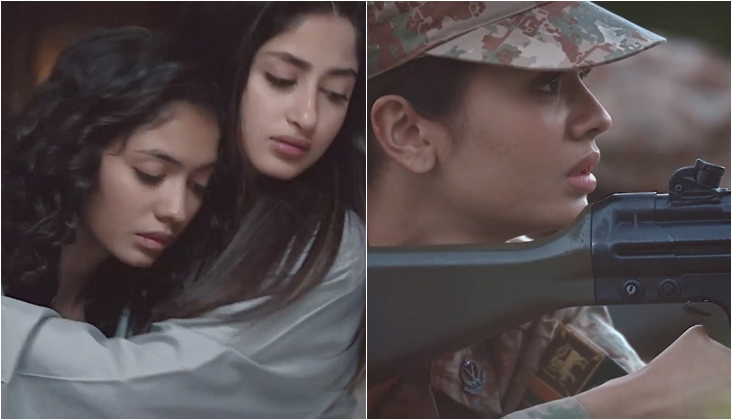 Her father passed away in a suicide terrorist attack while his stay in Pakistan, so she decides to get training at Pakistan Military Academy (PMA). The lucky representative of both Pakistan and Sri Lanka, Nathmy Perrera, played by Yehali Tashiya Kalidasa makes friends at PMA and fights alongside them on the battlefield.

The Sri Lankan cadet undergoes difficult and challenging training at PMA to apparently fulfill her father’s dreams and goals. According to the teasers, she becomes good friends with both Arzoo Daniel and Rabia Safeer.

While talking to a tabloid earlier, Kubra Khan had revealed, “We’re not ‘acting’ on Sinf-e-Aahan, they filmed us while we underwent actual cadet training,” sharing that she has a number of cuts and bruises as a result of the tough training.

Highlighting just how tough the routines can get, Kubra Khan said, “Salute to all the men and women that go for training and are in the forces.”

The Jawani Phir Nahi Ani actress also shared that all the equipment used in the show is not dummy. “If we’ve used a gun, or a water bag or anything that’s supposed to be used in training is real. If you see a 10kg box, we’ve actually carried a 10kg box. If we’re firing a gun, it’s an actual gun,” she said.

Written by famous playwright Umera Ahmed and directed by ace director Nadeem Baig, Sinf e Aahan is presented by ISPR. The show is produced by Six Sigma Plus and Next Level Entertainment, which are helmed by Humayun Saeed, Samina Humayun Saeed, Shahzad Nasib, and Sana Shahnawaz.

Sinf e Aahan starts this Saturday. What about it are you excited the most for? Have your say in the comments’ section below.

Related: Mahjabeen Mastaan from Sinf e Aahan—a force to be reckoned with

An avid reader, food enthusiast, and a writer, by passion.

Currently working at ARY Digital Network as the Lifestyle Editor