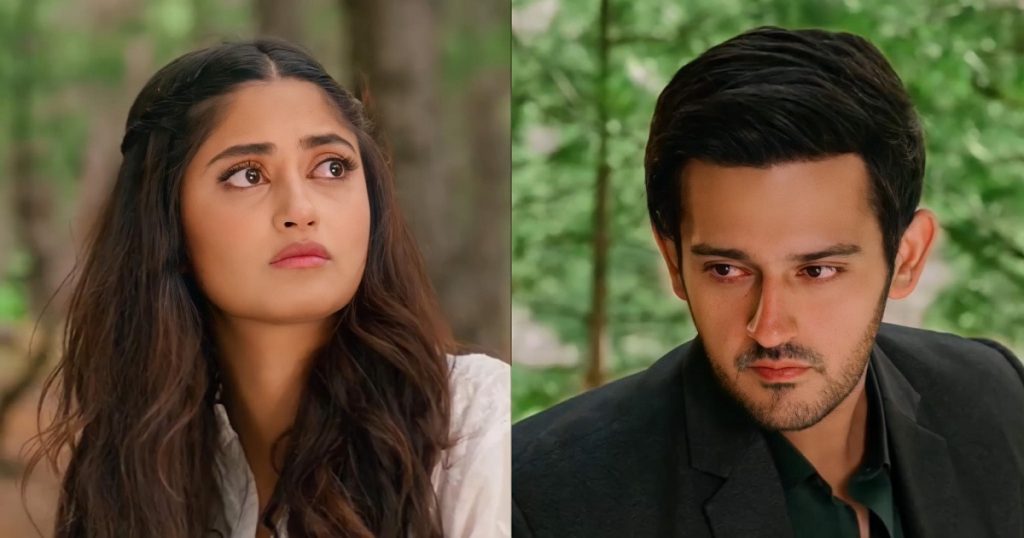 Ishq-e-Laa is turning out to be a far more interesting drama than I imagined it would be. Right from the beginning, it has been a surprise package since what was promoted as a love story turned out to be a story about soul searching and finding the true meaning of being close to the Almighty. Even though these themes of the drama have not been directly inculcated into the script at the moment, it is quite evident that the basic purpose of the drama is to highlight the true meaning of human existence. The characters are shaping up even more with every passing episode. A few weeks back I was unsure about the script because it did seem as if it might not have a lot to offer. However, so far I am pleasantly surprised for sure. Therefore, if you are one of those viewers who gave up on this drama early on, you should definitely give it another chance. The director has turned Ishq-e-Laa into a visual treat by making sure that every scene is shot beautifully sometimes at the cost of originality, which is never a good idea! However, for the most part, the visuals go well with the main theme of the different tracks. The on-screen chemistry between Sajal Aly and Azaan Sami Khan deserves a special mention since without it Azlan and Shanaya’s scenes would not be so powerful.

Tonight’s episode covered many difficult and life-altering decisions made by some of the central characters. The writer did a commendable job of setting the perfect foundation for the important developments in this episode. The clash between Azlan and Shanaya’s thinking, their different ideas and ideals were clearly well established right from the onset. At the same time, the fact that both of them wanted to make this relationship work was also shown convincingly especially ever since they got married. However, Arbab Haroon’s role in this entire scenario and most importantly the kind of support Azlaan’s father extended to his friend was completely unexpected. This entire development was covered with the utmost precision. Shanaya’s father-in-law always came across as someone who wouldn’t impose his decisions on others but that is definitely not the case! He decided to stand by his ‘friend’s’ side owing to the benefits he was acquiring in his business because of him. Arbab Haroon was a client he could not afford to lose or offend.

A script that did not appear to be meaningful enough before has definitely taken off and is getting more interesting because of the depth and nuances that have been added to Azlaan and Shanaya’s track in particular. Also, initially, the scenes through which Shanaya’s bold nature was translated on screen were somewhat nonsensical but now that the story is moving forward, Shanaya’s principles make more sense than ever. Sajal Aly’s phenomenal performance made the opening scenes even more impactful. She translated the hurt and insult Shanaya felt impeccably on screen. Although Shanaya was shown “compromising” on quite a few things in the past, this was one thing she was not going to compromise on. She also made a rather sudden and life-altering decision tonight when she walked out when she felt that she had to compromise on her values in order to stay in that house. Once again, I couldn’t help but wonder how wholesome this entire track would have been had Shanaya’s mother been in the picture as well throughout. When she walked out of the house, I wondered where she was headed and whether we will actually get to see her mother or not! The viewers shouldn’t be left wondering about such things because of basic ambiguities in the script or screenplay.

It was an absolute pleasure watching Shireen (Shanaya’s mother) on the screen once again. Laila Wasti never disappoints when it comes to adding grace and subtlety to characters which she chooses wisely. Shanaya’s mother’s support for her and her open-mindedness has always been a breath of fresh air. Her relationship with Shanaya makes it even easier to connect to Shanaya’s personality and ideals. There are few characters such as Shireen’s that are the perfect balance of maturity, strengths, and vulnerabilities. Shanaya and Azlan’s meeting after she left his house was powerfully executed and penned down beautifully as well. Even though Azlan wanted her to change her decision, he was not being as unreasonable as his father. The OST has been composed and sung so well that the scenes in which it is played in the background automatically become more impactful. The complications between Azlan and Shanaya have not dimmed down the intensity of their feelings for each other. Sajal Aly and Azaan Sami Khan’s fiery on-screen chemistry makes this couple truly come alive on screen.

Arbab Haroon’s visit to Sultan’s house showed that he was wise enough to figure out that Shanaya was not even going to listen to her in-laws therefore he had to do something himself. He used the carrot and stick policy in order to pressurize Kanwal. He offered money and at the same time subtly warned her of dire consequences if she did not do what he wanted from her. Surprisingly, Kanwal did not pay heed to the threat at all and was even more determined than before to punish the murderers.

Tonight’s episode of Ishq-e-Laa was well-paced and entertaining. The preview of the next episode suggested that Kanwal will eventually give in and take the case back. Unfortunately, this is the true depiction of the actual state of affairs in our country. I am more interested in Shanaya and Azlan’s meeting in the upcoming episode than anything else. Azka’s character has not come to the forefront just yet. Will Shanaya’s character exit from the story at some point?

Did you watch tonight’s episode of Ishq-e-Laa? Do share your thoughts about it.