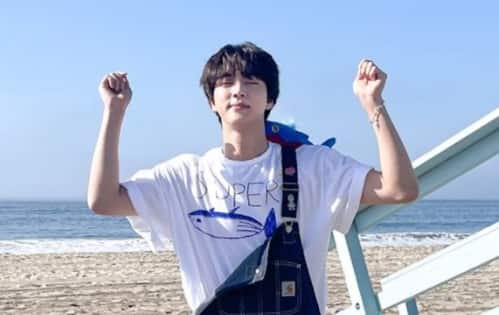 Well, BTS Jin has delivered another hit after Yours, the ballad from Jirisan. His ’embarrassing song’ Super Tuna is going viral and how. The song has broken into the Top 10 of the Hot Trending Songs of the Billboard Hot 100 charts. The hashtag #Supertuna has accumulated 100 million views on TikTok. If this is not all, then the fish candy Swedish Fish has also jumped on the bandwagon doing the challenge. The Ministry of Fisheries of Korea has also taken part in the #SuperTuna challenge. This is not all, the dog toys sold at Target from BARK are also seeing a surge in sales. ICYMI, the dog toys were sewn into his white tee. Also Read – BTS’ J-Hope’s USD 100 condom shirt grabs ARMY’s attention after V’s shirtless pic; fans say, ‘What are we getting next?’

The song, which belongs to the genre Korean trot is known for a specific vocal style. A video is going viral where people are vibing to Super Tuna at a party in Russia. BTS Butter is already there on the Billboard Hot 100 Trending Songs list. Jin was surprised to see the dance challenge as he did not promote one. Anyways, the song is a viral hit….Take a look at Twitter reactions… Also Read – BTS and Squid Game effect: Indian fans get desperate to learn Korean language – read interesting research

Everyone going super hard during the dance break and there comes Jin with his super tuna dance step that was funny ? #SuperTunaByJin https://t.co/d5ZsZRho8q

Poor Jin omg hahaha.. I understand the frustration. I asked him to do the Super Tuna challenge ? #BTS @BTS_twt #방탄소년 #SuperTunaByJin #Jin pic.twitter.com/gR84e6zYkO

He said the song made to his mind when he was on a fishing trip with BUMZU who is a music producer with HYBE. He works with the group SEVENTEEN. Jin said that the song was just a fun exercise. It was shot in Los Angeles with a couple of backup dancers. Well, Kim Seokjin you have the Midas Touch. Also Read – Trending Hollywood News Today: BTS’ Kim Taehyung aka V smashes records on Instagram, pregnant Jennifer Lawrence talks about having ‘a ton of s*x’ and more