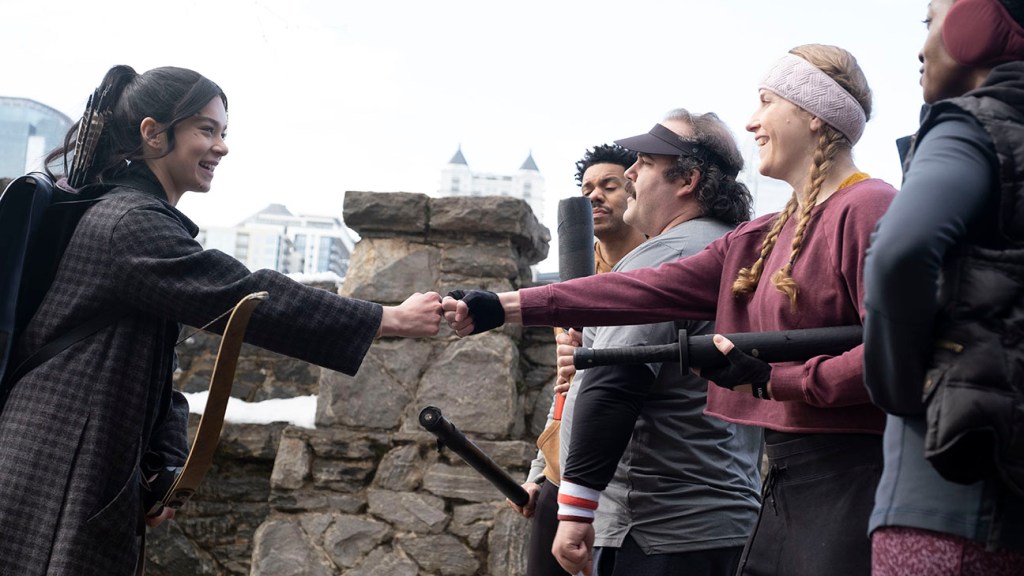 “I was a weapon. I was aimed by the right people at the right targets.” The fourth episode of Hawkeye slows things down for some Christmas cheer, at least for a little while. Just as it seems Clint (Jeremy Renner) and Kate (Hailee Steinfeld) are finally on the same page and being afforded the chance to catch their breaths, the sins of Ronin’s past rear their heads again. Not only is there the duplicitous nature of Jack Duquesne (Tony Dalton), who despite his hammy charm, is running a front for the Tracksuit Mafia, but Maya Lopez (Alaqua Cox) still has vengeance on her mind, and she’s not the only one. In the episode’s final minutes, Yelena Belova (Florence Pugh) enters the fray. But the question remains, when all the arrows are shot and targets found, whose side will she walk away on?

In “Partners, Am I Right?” written by Heather Quinn & Erin Cancino, and directed by Bert & Bertie, the stinger at the end of Black Widow (2021) finally begins to pay off, and with it is the suggestion that Kate’s mother, Eleanor (Vera Farmiga) is more tied up in things than we initially realized. After confronting Clint over her concern for Kate’s safety, and being dissatisfied with his answer, she makes a call. While the identity of the caller isn’t revealed, Yelena’s appearance the next night suggests that Eleanor is in contact with Valentina Allegra de Fontaine (Julia Louis-Dreyfus), the woman who put Yelena on Clint’s trail at the end of Black Widow. Given Eleanor’s association with the Masters of Evil and Kate’s nemesis Madame Masque in the comics, it’s not surprising that she has some dirty little secrets in the series. After all, how could she run a security agency and not be aware of Jack’s own criminal dealings? Regardless of whether Eleanor works for Val or is simply calling in a favor, it feels as though Kate may lose another parent in one way or another. Will Clint be enough of a substitute? Not if Yelena stays on her current path.

Yelena’s presence in the series was no secret, of course, but it is interesting that when we see her, she is immediately in attack mode, providing neither Clint nor Kate the chance for an explanation. No doubt Val sunk her hooks into Yelena a while ago, given their familiarity with each in the post-credit scene of Black Widow, but given everything we learned about Yelena in that film, along with she and her family’s own history of regrettable violence, it is rather surprising to see her buy into Val’s set-up so easily. The six-year gap between the events of Black Widow and those of Hawkeye could certainly provide some explanation as to why Yelena has seemingly broken bad, if she wasn’t among those snapped out of existence by Thanos, that is.

Would the MCU introduce a new hero, one who immediately found fan adoration, only to repurpose her as a villain so soon after? Especially when the basis of that seeming villainy, that Clint Barton is responsible for the death of Natasha Romanoff, is a lie? It would certainly challenge expectations, and Yelena hasn’t always been the hero she’s depicted as in the pages of Kelly Thomson (who also left a defining impact on Kate Bishop’s comic book history) and Elena Casagrande’s current run on Black Widow. In fact, the Splinter Cell-esque night vision goggles she wears in the episode are reminiscent of Yelena’s time on A.I.M.’s high council, during which she battled Clint Barton and his ex-wife Mockingbird in Nick Spencer and Luke Ross’ Secret Avengers (2013). It’s also worth noting that her Widow’s Bite emits red energy, associated with the Widow’s of the Red Room, rather than Natasha’s blue electricity, signifying her as an Agent of SHIELD and force for good. The significance of the color of her arsenal could be another sign of Yelena’s corrupted morals.

The long-awaited conversation between Clint and Yelena will most likely happen next episode, but he also still has Maya and the Tracksuits on his case, along with the revelation that Maya has a watch that leads to where one of Barton’s old colleagues in hiding. Fans may be expecting a new Marvel face to show up because of that watch, but given its placement in Maya’s apartment, alongside information on Clint’s family, that old colleague seems likely to be Clint’s wife, Laura (Linda Cardellini). The fact that Laura speaks fluent Russian in the episode and can look up tracking information and confidential intelligence suggests, for the first time, that Laura Barton isn’t just a civilian with an ordinary past. The story of how Clint and Luara met has never been revealed, but her newly displayed skillset and the interest in that watch suggest Laura may have significant ties to Clint’s time as a SHIELD agent, and in fact, her name might not even be Laura. It’s possible Laura is just an alias for Bobbi Morse, aka Mockingbird. Although the character did appear in Agents of SHIELD, where she was portrayed by Adrianne Palicki, Laura Barton being revealed as the character could answer canon questions about the ABC series, or simply confirm that Mockingbird is a code-name passed down through the ranks of SHIELD Agents.

What seems all the clearer now, is that Clint’s family will be the thing that offers redemption or damnation for several characters. Kate, Maya and Yelena are all from broken families, and Clint’s desire to reunite and repair his own family is all he’s holding onto. Take them away and he becomes Ronin again, a monster made easier to kill because of things he’s done and will do. So will Maya or Yelena be able to take that from Clint, turn him back into the man they want to kill? They too are weapons, but they are aimed by the wrong people and the wrong targets. The only way to set them right is to take a risk, one that comes back to what Clint said was his best shot, “the shot I didn’t take,” his decision to spare Natahsa Romanoff and offer her freedom and redemption.

This shot, it seems, will come down to Kate. Can she spare Maya or Yelena, if given the chance, and risk losing her mentor to his inner rage, or can she find new allies through her actions? With Maya already set for the spin-off series, Echo, her heroism at the end of the day seems like a forgone conclusion. But for Yelena, it’s far less so. For a character like Kate, who lives by impulsive decisions, the choice of when not take the shot that is inevitably coming will likely define her relationship within the MCU for years to come. And this time around Hawkeye and Black Widow may not be the best of friends, but the worst of enemies.