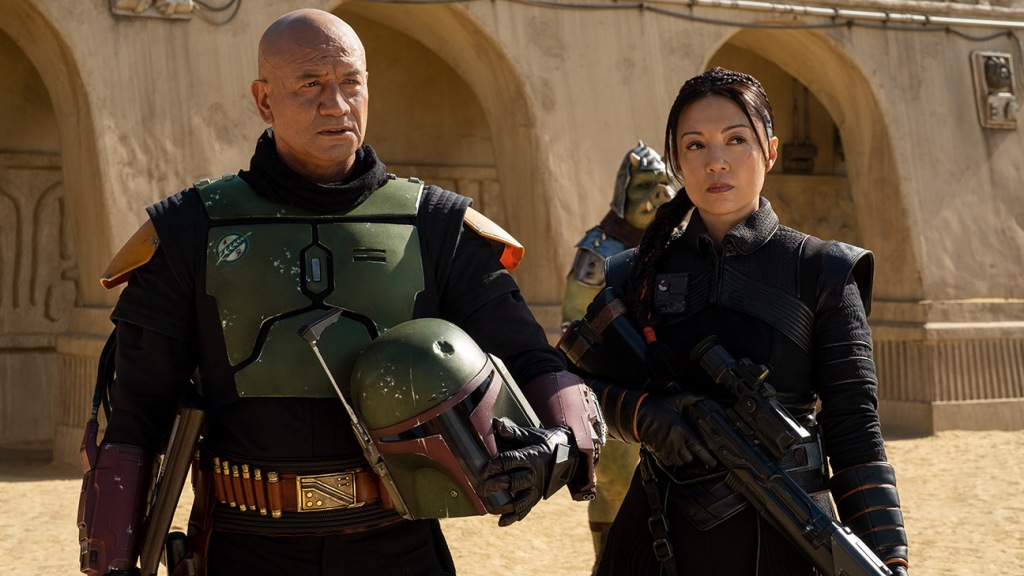 It’s past the midway point in Disney+’s The Book of Boba Fett, and as fans head into the final three episodes, they might be asking themselves a difficult question: Is Lucasfilm’s second live action Star Wars everything they’d worried its first would be?

From the time the The Mandalorian‘s title was announced in October 2018 to its debut on Disney+ thirteen months later, fans speculated what that series would offer. Was it going to be a bounty hunter procedural or a Game of Thrones-esque epic? As more details about the project were released, the series’ debt to the original Star Wars trilogy became more obvious, prompting some to wonder just how much it would center on nostalgia, as opposed to anything new or unexpected.

What eventually arrived, of course, was a show that made multiple nods to Star Wars of the past, but took things in a different direction. Whether it was the very existence of Grogu and the cloning subplot that he drove, intermittent dives into Mandalorian lore, or simply a refusal to use pre-existing characters for anything more than a cameo, The Mandalorian felt like something new from a galaxy far, far away that had been feeling increasingly stale and repetitive on the big screen. A bullet, it seemed, had been dodged.

And then Boba Fett showed up.

While his appearances in The Mandalorian‘s second season verged on the brink of being self-indulgent fan service — really, was there any reason that he had to appear in the larger story? — the show’s strong identity, based around the title character’s connection with his adopted son figure, and the lengths he’d go to protect him,  ultimately prevailed. This allowed the show to maintain focus on its core strengths and save the series from becoming fan service with little purpose beyond nostalgia. The Book of Boba Fett, however, has no defense mechanism, much to its detriment.

This much was signposted by the prologue to the series that appeared at the end of The Mandalorian‘s second season. In the space of less than a minute, the viewer was given multiple visual cues to bring 1983’s Return of the Jedi to mind, whether it was Jabba the Hutt’s palace on the desert planet of Tatooine, the (brief) return of fan-favorite minor character Bib Fortuna, appearances of Gamorrean guards and Twi’lek dancers, and sets and shots recreating the look and feel of the opening of the final chapter of the franchise’s original trilogy. The message was clear: if audiences wanted the old hits one more time, then here they were — in a series centered around arguably the biggest one-hit-wonder the franchise had ever produced.

That teaser proved to be entirely prescient of the show to come. Four episodes in, The Book of Boba Fett has continued to focus on recreated style over substance, working Tusken Raiders, Jawas, Rodians, Wookiees, Twi’leks, familiar droids, the Rancor, some extra Hutts, and (of course) the infamous Sarlacc Pit into proceedings. It even brought back Max Rebo, the blue elephantine keyboard player from Return of the Jedi, which is one of the deeper cuts one can imagine, for multiple appearances across the season. For those who wanted to revisit childhood favorites one more time, it’s manna from heaven … but for anyone wanting a show that stands on its own merits, things might be slightly less of a slam dunk.

With more than half of the show’s first season finished, it should be noted that Boba Fett is an astonishingly slow show. Even accounting for the dual timeline structure of the series, which has split the story between what happened before the character’s appearances in The Mandalorian season two and what happens after — very little has actually been accomplished in terms of forward motion.

By the time the second season of The Mandalorian ended, fans knew that Boba had survived his apparent demise in Return of the Jedi, become far more zen about things than might be assumed given his previous appearances (although no less deadly), and then taken over organized crime on Tatooine by killing Bib Fortuna and replacing him as head of what used to be Jabba the Hutt’s organization.

Four episodes of The Book of Boba Fett later, and we can add the following things to that list: (1) After his escape from the Sarlacc, he was taken as a slave by Tuskens before earning their trust and respect, but (2) the Tuskens were killed by a rival gang, whom he then killed as revenge. Meanwhile in the present day, (3) Boba is preparing to fight a rival crime syndicate, who appear to be making claim to his territory.

That’s basically it, with the majority of story so far either given over to fan service that goes nowhere (Jabba the Hutt’s cousins appear, and it looks like they’re going to demand Jabba’s empire! Oh, now they’re leaving because someone told them off-camera that someone else wanted the empire! But, hey, we got to see some other Hutts, I guess?) or massively extended set pieces focusing on mood over plot, while simultaneously being surprisingly light on mood. (Boba’s vision quest in the second episode, anyone?) Ultimately, more about Boba Fett has been revealed in less screen time when he was a guest-star on someone else’s show than he’s managed in his own series.

It all adds up to a show that feels uneven at best, if not outright directionless, outside of evoking nostalgia, especially compared with the narrative speed of The Mandalorian as well as that show’s desire to introduce new elements to the core mythos of the franchise as a whole. Half a season in, it’s a fair question to ask “What is The Book of Boba Fett about?” Given the evidence at hand, it’s hard not to give the answer, “Making fans of the old films happy about seeing their old toys again.”

Boba Fett’s final three episodes air on Disney+ weekly every Wednesday through Feb. 9. Maybe things will speed up as it heads towards the climax.