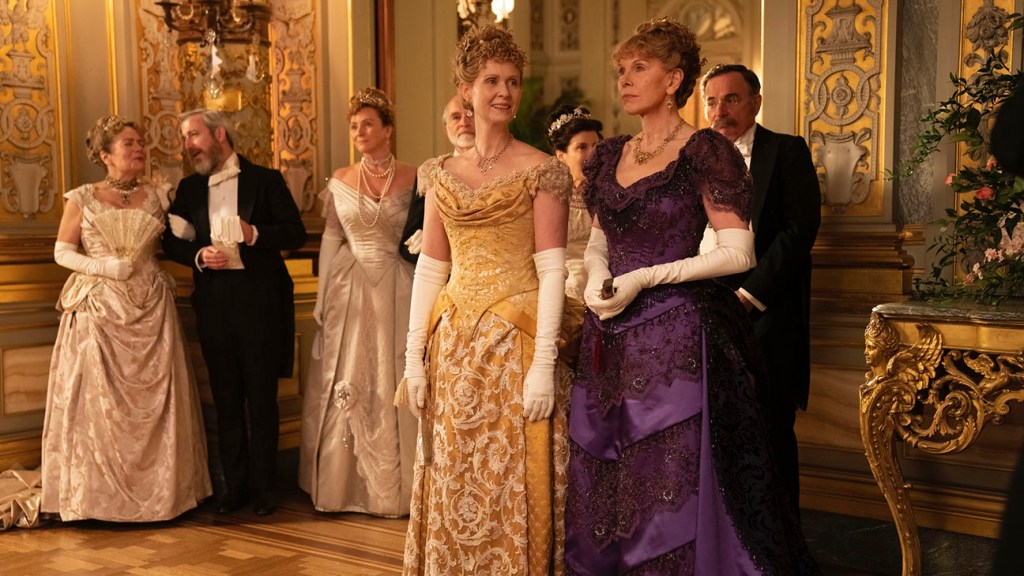 In mid-March of 2020, The Gilded Age was just five days away from its first day of shooting when production shut down due to the burgeoning COVID-19 pandemic. As the show stopped before it really ever got started, writer and creator Julian Fellowes thought the virus “might be the death knell” for the project.

COVID didn’t end up killing the show, but it did necessitate a pause. Yet another pause, as The Gilded Age was first announced in 2012 and has been coming together in stops and starts ever since. It’s been a 10-year journey to finally realize the period drama focusing on the postbellum friction between the Upper East Side’s old-money establishment and one family of social climbers with newfound railroad wealth (as well as the staffs that work for them). That period has seen The Gilded Age switch networks, a major castmember leave and new, key collaborators join, including a writer to work with Fellowes. Also, COVID happened, throwing the sprawling period-drama production apparatus into a tailspin. “It was one of those things: survive and adapt,” says executive producer David Crockett. “We kept going,” adds Fellowes. “I’m really pleased we got it done and pleased with what we did.”

Even before he had the idea for The Gilded Age, Fellowes — the writer behind the 2001 Robert Altman-directed upstairs-downstairs drama Gosford Park and creator of the Yorkshire estate-set Downton Abbey, which aired stateside on PBS’ Masterpiece Classic — was an avid reader of books about the late 19th century period of vast wealth disparity and tumult as American industry skyrocketed. He was struck by the stories of tycoons “born of fortunes after the Civil War and descending on New York to build their palaces” and eventually thought that, if he was enjoying these tales so much, others might, too. (He has previously cited the works of Edith Wharton and Henry James as additional inspiration; writer and co-executive producer Sonja Warfield, who worked with Fellowes on the scripts, also says she’s a major fan of Wharton’s.)

Fellowes initially wrote a pilot about the Vanderbilts — whose vast shipping and railroad fortune led to the creation of Vanderbilt University and the construction of opulent mansions like The Breakers in Newport, Rhode Island — that was never made. That earlier script convinced Fellowes that writing about real historical figures restricted his ability to tell an engaging story. “My next idea to write a Gilded Age series that wasn’t a direct narration of the Vanderbilts” — rather, that was populated with fictional characters, with a few historical figures thrown in — “was there almost immediately in my head,” he says. Fellowes pitched the idea to then-chairman of NBC Entertainment Bob Greenblatt in 2012, and that same year NBC announced the series was in development, at a time when Downton Abbey had already proved to be a ratings success in the U.S.

Actor Christine Baranski, who plays the old-money socialite Agnes Van Rhijn in the HBO series and who says she loves period pieces, remembers hearing some early buzz about an American version of Downton Abbey. “I just remember saying to my representation, ‘Oh my God, I would do anything to be in it.’ Then I didn’t hear anything about it, of course, for years.”

The NBC announcement, Fellowes says, turned out to be premature. At the time “Downton was rolling along like a great sort of automaton and I had to keep feeding it” as the series’ creator and most often sole writer. Downton Abbey, originally conceived as a miniseries, went on to air for six seasons. Executive producer Gareth Neame, who worked with Fellowes on The Gilded Age and Downton Abbey, recalls receiving the first draft of the former’s pilot episode in 2016, at a time when the pair were also developing their first Downton Abbey feature film, which eventually premiered in 2019. NBC finally gave The Gilded Age a series order in 2018, with an intended air date one year later.

Then, a sudden announcement in the spring of 2019: The Gilded Age was moving to HBO. Reports of why the series left NBC at that time focused in part on the project’s scale (in a statement, then-NBC Entertainment co-chairmen Paul Telegdy and George Cheeks cited the series’ “ambition and scope” and said they ultimately concluded “HBO is the perfect network for this epic story”). Neame concurs now, “I think there would have been a huge struggle to make the show at a number that would have made sense on network television.” He adds that “this really has cost a lot of money, this show” and that HBO was one of the few places with the resources to make it as written. (A representative from HBO said they could not comment on the show’s budget.) Greenblatt, who Fellowes described as a champion of the series in the episode of THR‘s TV’s Top Five podcast released Friday, ended up bringing The Gilded Age to HBO when he left NBC to become chairman of WarnerMedia Entertainment in 2019.

After the show moved to HBO, American writer Warfield (Will & Grace, She-Ra and the Princesses of Power) joined Fellowes in 2020 to “really authenticate the world” and bring an American perspective, she says. Rutgers University history professor Erica Armstrong Dunbar consulted on the period details and co-executive produced the series, while executive producer Crockett got to work on locations, sets and casting. The production was “ready to go” when it shut down due to COVID in March 2020, says Neame. Though it started up again in September of that year, COVID ultimately stretched the six-month production schedule into eight months and pushed the planned release date for the series (again) over a year. It also lost the series one of its main actors: Amanda Peet was initially cast as the new-money socialite Mrs. Bertha Russell, a character who is positioned in opposition to Baranski’s snobbish Van Rhijn and her sister Ada Brook (Cynthia Nixon), but she dropped out due to scheduling conflicts, with the role then assumed by Carrie Coon.

In hindsight, executive producers Crockett and Neame say they’re thankful that HBO was willing to shoot a large portion of the show in New York (some of the series was also shot in Rhode Island) — which Neame says would not have happened “if you were really scrutinizing a budget” — and that the production drew significantly from local Broadway talent, in part because it made COVID-era production slightly more manageable. The series was crossboarded (multiple episodes were shot at the same time) rather than shot in episodic blocks, “so having the actors right there and available to us on a daily basis was very important,” says Neame, noting that it was more difficult for actors to travel for work early on in the pandemic. “Because of COVID, all of these great, award-winning actors were available and more than happy to go to work,” adds Baranski.

Production started up months before all Americans were eligible for vaccinations, and “we had an etiquette that rivaled Versailles,” Fellowes says of the set’s health and safety precautions. The production shut down for 48 hours at one point due to what several people on the series call false-positive COVID results, and Crockett says there were a few individual cases of workers getting the virus over the course of shooting, though Fellowes says an actor never got sick. “We had to deal with some discomfort and all, but we got to do the show, really, while COVID was still raging. We got 10 episodes in,” Baranski says. Nixon adds, “It was miraculous, really.”

When asked if the show’s storylines have changed with the times since he first pitched Greenblatt his idea for The Gilded Age, Fellowes says, “They evolve, you know,” adding that he typically edits to give particular characters more screentime or to more effectively bring them to a certain point. When Warfield joined as a writer, she and Fellowes began penning alternate scripts, which the other would then rewrite, with Fellowes doing a final revision. The show’s tackling of race — it takes place not long after the Thirteenth Amendment passed — and sexuality should resonate with today’s audiences, Fellowes believes. One core storyline follows Black writer Peggy Scott (Denée Benton), who comes from an upper-class Brooklyn family and develops a complicated friendship with Van Rhijn’s and Brook’s white niece, Marian (Louisa Jacobson); another key, male character lives in secret with a male partner but chases a more elevated lifestyle by courting a young woman with a fortune.

And like the former Fellowes projects Downton Abbey and Gosford Park — and their iconic 1970s TV precedent Upstairs, Downstairs — The Gilded Age focuses both on the Upper East Side’s one percent as well their staff. The show’s writers believe the period’s vast disparities will resonate with viewers after decades of growing economic inequality. Today, there is “a kind of dynamic with all of our billionaires racing each other to the moon that is rather reminiscent of the Gilded Age,” Fellowes says. Adds Warfield, “We still have major income inequality in this country. So it’s still relevant, still the same, even though it’s from 1882.”