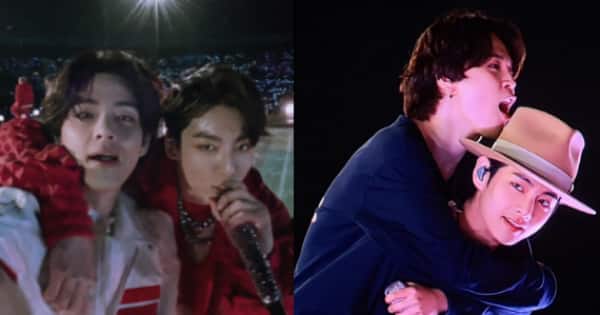 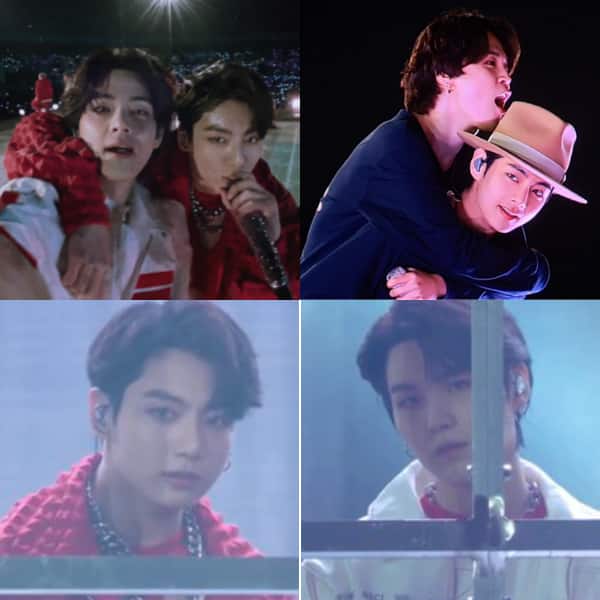 BTS’ Permission To Dance on Stage concert was held in Seoul’s Olympic Stadium last evening. Clips and pictures from the stadium, outside the stadium and the BTS ARMYs who were watching it at home went viral! Bangtan Boys – Taehyung, Jimin, Suga, Jungkook, J-Hope, Jin and RM – poured their heart and soul into the concert. And why won’t they, after all, the BTS members were performing in Seoul, this homeland, after two and a half years. The sheer excitement to perform in front of the ARMYs in Seoul again was very heavy in the air at the Jamsil Olympic Stadium in Seoul. Here’s a lowdown on some of the Taekook, VMin and YoonKook moments from the PTD on Stage in Seoul concert… Also Read – BTS Permission to Dance On Stage Seoul: Jungkook posts emotional message for Korean ARMYs post concert; says, ‘Actually feels 23 years’

A video of Taehyung vibing high to Airplane pt. 2 that left Jungkook laughing went viral on the gram. Another video from their Dope performance wherein BTS V played with the camera and Jungkook joined him also went viral. Jungkook and Taehyung are chaotic when they are together. However, they are also adorable and it was seen when they did the hook-step of Permission To Dance together on stage. Taekook’s vibe on Baepsae, that is, Silver Spoon was also one of the iconic moments. TaeKook fans would have gone berserk on seeing them. Also Read – BTS Permission to Dance on Stage Concert: Jungkook performs his ICONIC ‘Shirt Lift’ move on Fake Love; ARMY goes nuts

There were also VMin moments that were highlighted by the ARMYs. Towards the end of the concert, Jimin that is Baby Mochi jumped up on V’s back. Taehyung gave him a lift without any complaints. V and Jimin are considered to be soulmates and their bond on-stage was seen a lot of times.

VMIN WAS SO CUTE THE WHOLE CONCERT ? pic.twitter.com/yodLu5c8QO

ARMYs also talked about YoonKook moments at the Permission To Dance on Stage concert in Seoul. The one where Jungkook hugged Suga aka Min Yoongi from behind while he rapped his weverse from HOME sent BTS ARMYs into a tizzy. YoonKook vibing high on Airplane pt 2 clip also went viral. Their breathtaking visuals from Black Swan also caught the attention of the ARMYs.

Yoonkook and black swan yea i need a rest pic.twitter.com/1EeydfUCFT