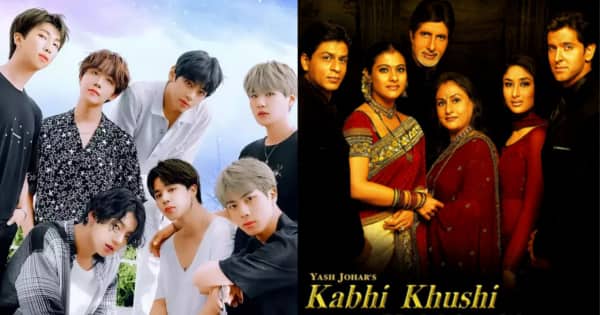 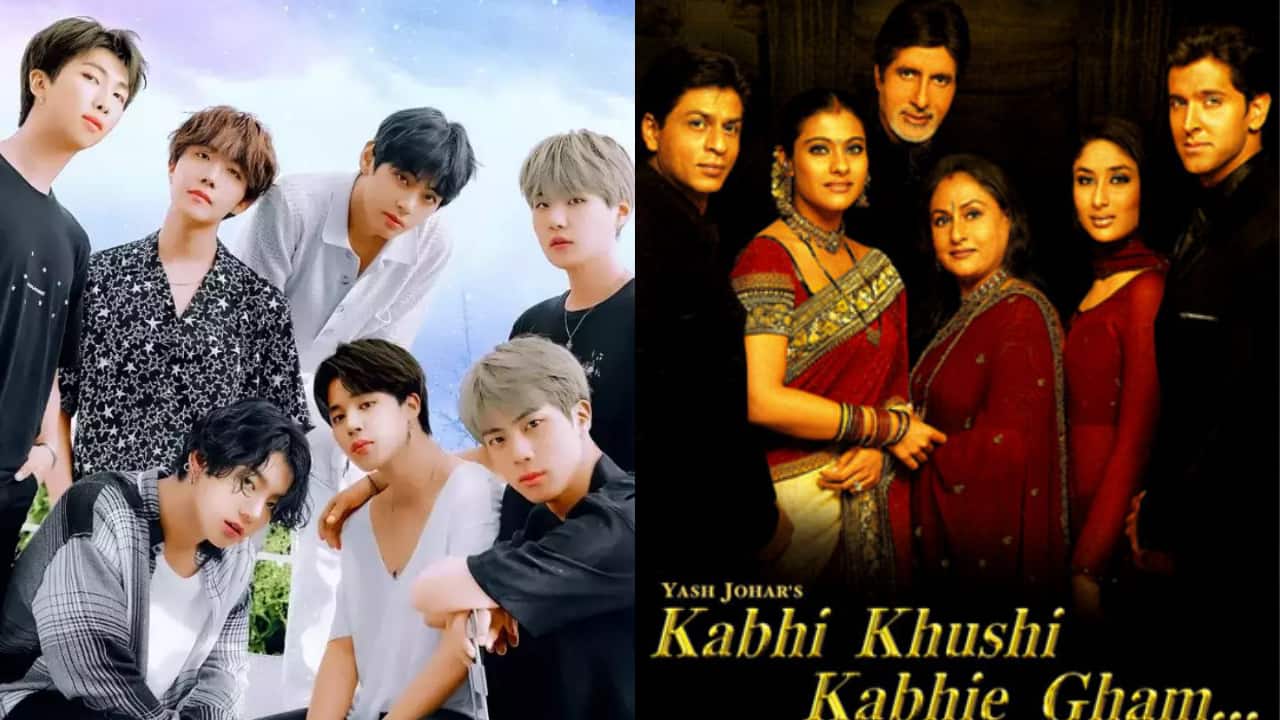 Hey BTS ARMY, we are back with another Bangtan Boys X Bollywood edit video. This time it is one of the iconic songs that we all grooved to. Of course, it’s in all good fun, ARMY. So, let us tell y’all beforehand that this clip doesn’t include Hobi. The ones who edit these BTS X Bollywood songs are so damn talented that we cannot help but share the amazing and uber-cool edits with y’all. Today, we have BTS Ft. Bole Chudiya starring Shah Rukh Khan, Kajol, Hrithik Roshan, Kareena Kapoor Khan, Amitabh Bachchan and Jaya Bachchan from Kabhi Khushi Kabhie Gham. And the video is so trippy that you’d enjoy it through and through. Also Read – Trending Entertainment News Today: Rajkummar Rao and Patralekhaa’s awkward mirror selfie sets tongues wagging; Anushka Sharma warns Priyanka Chopra Jonas on motherhood and more

Popular BTS ships – NamJin, YoonMin and Taekook are paired together. RM (Kim Namjoon) is seen as Yashvardhan Raichand, Jin (Kim Seokjin) is seen as Nandini Raichand. Suga has stepped into SRK’s shoes as Rahul Raichand whereas Jimin (Park Jimin) is seen as Anjali, Kajol’s character. And last but not least, Taehyung plays Kareena Kapoor’s Poo while Jungkook has stepped into Hrithik Roshan’s shoes as Rohan (Laddoo). As y’all know, the song begins with Poo and Taehyung’s start in Boy With Luv makes for the perfect entry sequence. It follows Jungkook joining him. BTS’ choreographies are out of this world and tbh, it’s surprising to another level when it is matched with Bollywood beats. The boys’ choreographies from Dynamite, Idol or their performances on stage on Home and more clips have been edited. This tailor-made version of BTS X Bollywood by ARMY is thoroughly entertaining. Also Read – Deepika Padukone’s Padmaavat, Hrithik Roshan’s Agneepath and more non-patriotic Republic Day releases that set box office on fire

You’d not want to miss out on Suga as SRK and Jimin as Kajol, their clips together are too adorable to handle. However, the cherry on the cake is NamJin. BTS’ leader RM has an aura, and his editing in the song as Amitabh Bachchan is perfect. His entry in the song is also something to watch out for. Jin as Jaya Bachchan is too adorable. However, it’s the ending twist that you need to see. You’d see Jin portraying Nandini’s (Jaya) pain of being separated from her son. Watch the video here: Also Read – Trending Hollywood News Today: BTS ARMY goes bonkers over Suga’s squatting skills, Kim Kardashian responds to Kanye West’s s*x tape claims and more

Meanwhile, BTS is enjoying their break. They are having fun relaxing, visiting places they like and sharing the pictures and videos of the same on their Instagram handle. Also, every Saturday, new episodes of BTS’ webtoon 7 Fates Chakho is released which has kept ARMYs entertained. However, they are sorely missing the boys. ARMY is also excited about the much anticipated Seoul concert.

PS. How about Hobi as Naina aka Rani Mukerji, Sope shippers?