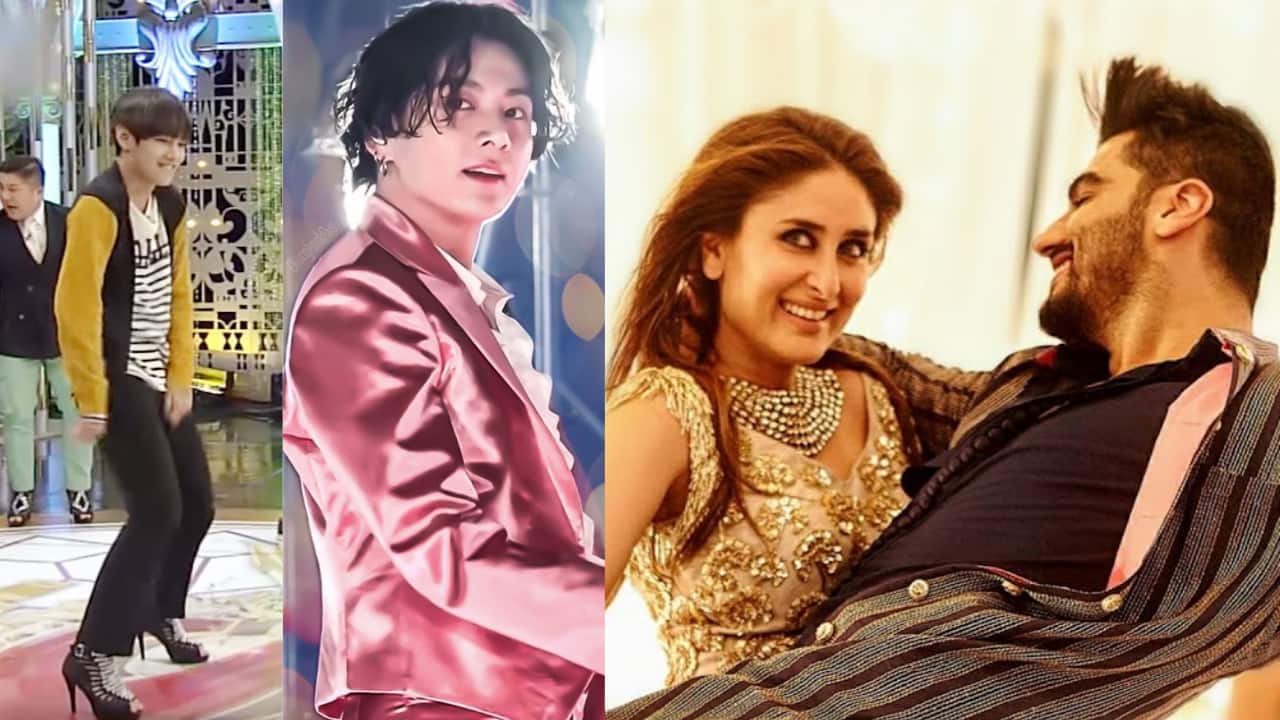 We are back with another BTS X Bollywood edit made by the brilliantly creative BTS ARMY. Today, we have a TaeKook edition of the BTS X Bollywood video. BTS members V (Kim Taehyung) and Jungkook’s (Jeon Jungkook) friendship is heavily shipped across the BTS ARMY. TaeTae is goofy in a quirky manner whereas Jungkook is like a diligent youngster. However, the Golden Maknae has his own goofy charm too. Today, in X Bollywood edition, we will have a dekko at TaeKook grooving to Kareena Kapoor Khan and Arjun Kapoor’s High Heels from Ki & Ka. And it’s all good fun. Also Read – Trending Hollywood News Today: BTS’ V shares glimpse of unreleased Heart-Breaking track, Kim Kardashian’s ‘threesome’ combo and more

The BTS edit features the Christmas Tree singer’s old clip wherein he danced on heels in a Korean Variety TV show. V aka Kim Taehyung can flaunt his sexy charm any time, anywhere. His model-like features and his classy bad-boyish attitude always send ARMY into a tizzy. He is a male version of DIVA, just like Bebo is considered a diva in Bollywood. You would have guessed it by now, the My Universe crooner has stepped in for Kareena’s part whereas Jungkook plays Arjun Kapoor’s part in the song sung by Jaz Dhami. The duet between TaeKook is a treat for the shippers. The edit includes BTS choreographies of Idol, Mic Drop to name a few. There are a lot of TaeKook goofy moments such as the clips of them acting extra at fan sign events, Run BTS episodes, viral clips from their variety shows, etc. The video edit also includes clips where Taehyung and Jungkook are seen teasing each other. BTS ARMY, you’d also see hotter clips of JK from their Sowoozoo concert, LA concert or even their performance on The James Corden Show. Check out the video here: Also Read – Tripti Malhotra wins the Best Makeup Artist Award in Chandigarh and outshines all around the makeup industry

Meanwhile, the Bangtan Boys have been chilling out as they are on a break. They have been spending time with their families and visits their friends and various scenic locations. They are yet to resume their schedules it seems. BTS ARMY is sorely missing the boys. BTS may start their schedule with a concert in Seoul. However, nothing is confirmed yet. Also Read – BTS: SUGA’s unseen pic from a Korean restaurant goes VIRAL; desi ARMYs compare him with Salman Khan of Tere Naam and Professor Snape from Harry Potter