Hollywood | Steve Harvey’s Net Worth – How Much Has The Superstar Comedian Made? #Showbiz
Showbiz Hollywood

Hollywood | Steve Harvey’s Net Worth – How Much Has The Superstar Comedian Made? #Showbiz 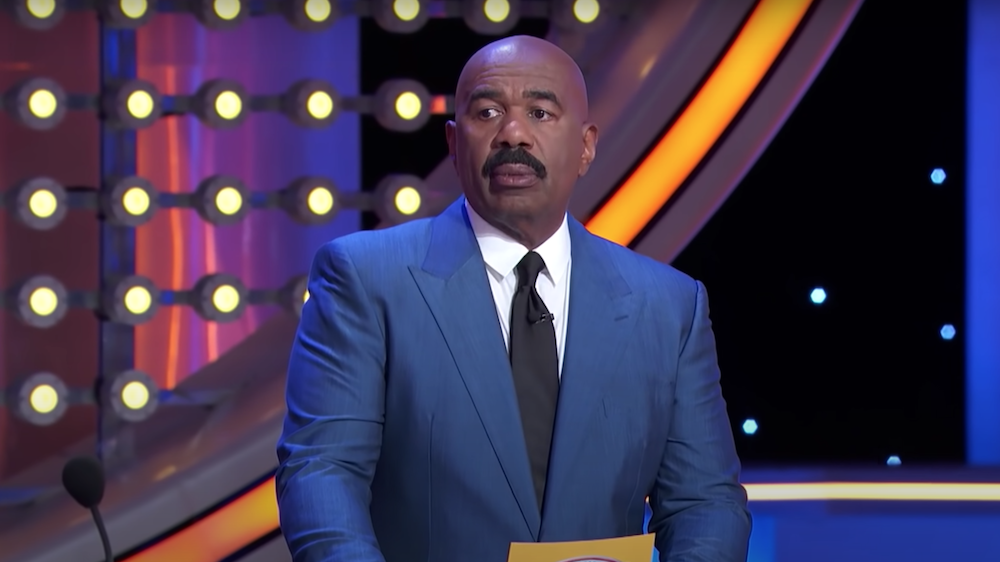 Steve Harvey has a net worth of $200 million, a number he built through stand-up comedy, Family Feud, and other ventures.

By Rick Gonzales
| Published 2 weeks ago

Steve Harvey has been in the comedy business for a long time now. His longevity and success can be attributed to the simple fact that the man is funny. But Steve Harvey is a decade removed from doing stand-up, so what is contributing to Steve Harvey’s net worth?

STEVE HARVEY’S NET WORTH ALL BEGAN WITH STAND-UP

Before Steve Harvey began accumulating his net worth through comedy, he did have other careers. He was an insurance salesman, a boxer, a carpet cleaner, an autoworker, and even a mail carrier. No wonder the man had a good handle on comedy; he lived so many lives.

Once Steve Harvey got into comedy, he never looked back. It was a decision that eventually cost him his first wife and a relationship with his twin daughters. It also put him homeless for three years. Harvey many times found himself sleeping in his Ford Tempo, having to use an igloo ice chest as a refrigerator, showering at rest stops, and mainly surviving on bologna sammy’s.

His very first stand-up show came on October 8, 1985, in a small club in Cleveland, Ohio called Hilarities Comedy Club. He was so good that he won the first-place prize of $50. This win, though, was the catalyst for his hard times.

With the $50 in his pocket and full of confidence, Harvey decided that comedy was for him, so he quit his job as an insurance salesman. This decision went over like lead bricks with his first wife. “I’m married, I have twins [Brandi and Karli, now 33]. I’m supposed to provide for them, but I had to take this chance,” he told PEOPLE.

Things didn’t get much better for Harvey as most of the money he made at the time did nothing for his net worth. His first full year doing standup netted Steve Harvey $3,000 total. After divorcing his first wife, Harvey saw most of his comedy income (75%) going to his ex-wife and twins, forcing him to live on $50 a week.

He recalled one time when he was trying to wash up in a hotel bathroom but because of all the traffic going in and out, he was forced to sit in a bathroom stall for hours, waiting for patrons to leave. “I sat down and started crying, but a voice said, ‘If you keep going, I’m going to take you places you’ve never been.’ It was like God said, ‘Don’t quit, you’re almost there.’”

That voice ended up being prophetic because it was soon after that Harvey got his first big break on a televised show from the Apollo.

Steve Harvey was finally doing what he was meant to do. His first showing at the Apollo turned into a long-term gig as the host of It’s Showtime at the Apollo. It appears that being a host for a show was meant to be.

HE HOSTED THE STEVE HARVEY SHOW

Steve Harvey’s stand-up was gold. His net worth was slowly building as was his popularity. His early success allowed Harvey to look to television and feature films. His first big show on television was the series Me and the Boys.

After Me and the Boys ended, Harvey led The Steve Harvey Show, a series that lasted six seasons. From there, Harvey continued with television as well as moving into features. He was seen on the series My Wife and Kids as well as The Parkers, while he jumped into features with The Fighting Temptations, Love Don’t Cost a Thing, You Got Served, Johnson Family Vacation, Madea Goes to Jail, and finally, Think Like a Man.

Steve Harvey was the cause of controversy the first year he became the host of the Miss Universe Pageant. In 2015, Harvey announced the winner of the pageant, but he accidentally announced the first runner-up (Miss Columbia) as the winner. A few minutes after the crown was given to Miss Columbia, Harvey was forced to go back onto the stage to let the audience as well as the true winner (Miss Philippines) know that he had misread the results.

This did nothing to hurt Steve Harvey’s net worth because not only was he brought back the following year as host, but he also finished off his five-year deal. After skipping 2020, Harvey was back hosting Miss Universe. Good for him.

STEVE HARVEY’S NET WORTH IS $200 MILLION

Steve Harvey’s net worth is $200 million. He has built that by taking in a yearly salary of $45 million. You may be surprised, though, just how Harvey brings in his impressive salary.

Steve Harvey no longer performs stand-up. Steve Harvey also doesn’t do movies, except on rare occasions. So, if the funny guy isn’t performing stand-up, nor is he in front of the camera in feature films, just where is his wealth coming from?

Steve Harvey brings in anywhere from $50-100,000 per episode of each the Family Feud and Celebrity Family Feud. But that’s not all that contributes to his fabulous net worth. He also gets a decent salary from a radio show that Harvey started over 20 years ago called The Steve Harvey Morning Show, a national radio program that nets Harvey $20 million a year.

There are a few more endeavors that contribute to Steve Harvey’s net worth. Since 2015 (taking a break in 2020) Harvey has been hosting the Miss Universe Pageant, after signing a multi-year deal. His average salary for those hosting duties is $1 million.

Also included in Steve Harvey’s net worth are the books Harvey has written. In total, Harvey has penned four novels including Act Like a Lady, Think Like a Man (2009); Straight Talk, No Chaser (2010); Act Like a Success (2014), and Jump, Take the Leap of Faith to Achieve Your Life of Abundance (2016). His first novel was also the basis for the 2012 hit comedy feature, Think Like a Man, which also spawned the 2014 sequel, Think Like a Man Too.

HE IS ON JUDGE STEVE HARVEY

Steve Harvey continues to build his net worth by continuing to host the Family Feud. He can also be seen as Judge Steve Harvey, where he brings the law to his courtroom to settle disputes, small and big.

Steve Harvey also looks to make his return to feature films. He is slotted to play opposite Megan Thee Stallion and Melissa De Sousa in the Malcolm D. Lee romcom The Best Man Wedding.