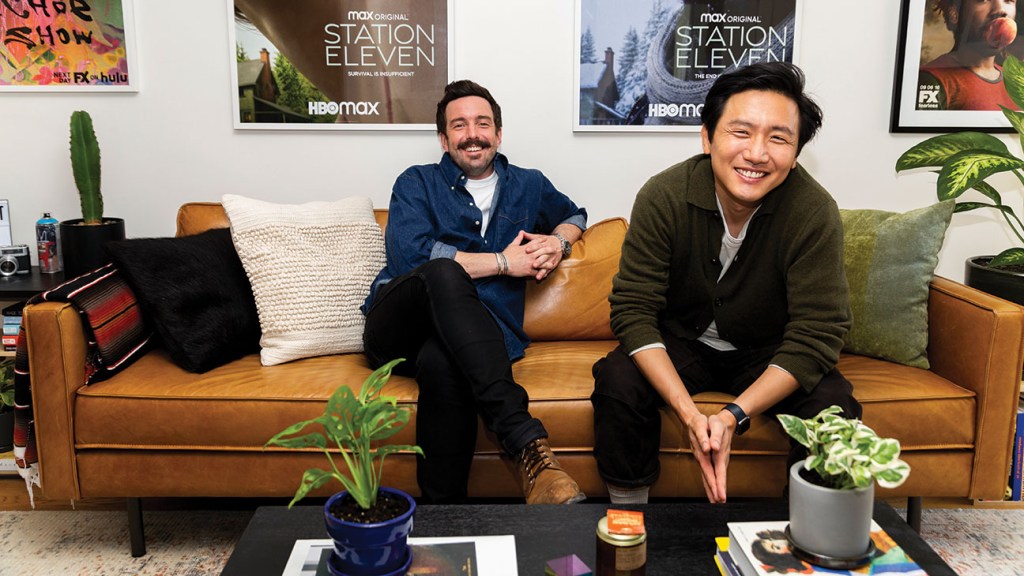 Like many creatives, Emmy-winning director Hiro Murai discovered a business partner on his own payroll. Formally teaming up with his longtime manager, Nate Matteson, the two co-founded the production company Super Frog in 2019. Despite pandemic-stalled schedules, the duo and their three-person team working out of an office in Los Feliz quickly put two series on the air. But if those initial projects (quirky FX talk format The Choe Show and dystopian HBO Max breakout Station Eleven) don’t appear to have anything in common, that’s not by accident. Matteson, an alum of Gotham Group and Grandview, and Murai, who made music videos before partnering with Donald Glover to executive produce Atlanta, are bucking the trend of most boutique production outfits by shrugging off any suggestion that they pick a lane. “We don’t want a checklist of things that each project ticks,” says Matteson during a three-way Zoom in February. “We just want to make things that you haven’t seen before, things that feel worth making.”

Station Eleven kind of wrecked me. Is that common feedback?

NATE MATTESON It seems to be a thing. Understandably, I think it’s the times we’re in — and it’s a show that wears its heart on its sleeve.

HIRO MURAI That was a lovely surprise of the thing. Not everything that we make is as earnest as that show, but it needed to be for what it was and when it was coming out.

You filmed the pilot before the pandemic. Were any choices reconsidered because of the timeliness of the material?

MATTESON We thought a lot about that scene in the pilot where [characters played by] Himesh [Patel] and Matilda [Lawler] are in the empty grocery store. We were trying to get back into production while everybody was literally waiting in line, with masks, to get into Whole Foods. The grocery store became this odd part of life impacted by COVID, so we knew the audience was going to have a different way of interacting with it.

MURAI Even from the get-go, our mission statement was to make this a subversion of the post-apocalyptic genre — a kinder, more human version of that story.

You both worked together for quite a while before forming the company. How did you meet?

MATTESON I was a recently promoted manager, looking to work with exciting, highly visual filmmakers. I stumbled across Hiro’s work off of a couple of music videos — mainly, the Shins video for “It’s Only Life” — and reached out cold with, having since reread it, a cringey email.

What were your first jobs in entertainment?

MURAI I got into production in college, shooting a lot of concerts. It was just a lot of freelance work.

MATTESON I grew up in Wisconsin and went to school out there and got my first PA job, as a college kid, on this movie — Zach Braff’s follow-up to Garden State called The Last Kiss. Tony Goldwyn directed. My job was driving Tony Goldwyn to the Madison airport in my shitty Volkswagen Golf.

Tell me about the name of the company, Super Frog.

MURAI I bought a green tree frog to film a music video 12 years ago. At the time, I didn’t know that frogs lived 30 years, so I am still currently the owner of a frog.

MATTESON It sounds like a metaphor for what we’re doing. We just decided, “Hey, let’s do this thing that’s actually an enormous responsibility!”

MURAI Toady Roosevelt. To be fair, it’s not a toad — so it’s not an accurate name. All the toad experts are going to be really angry.

When you go out to pitch a project, what are the assumptions about what you two bring to the table?

MATTESON A level of strangeness, a level of surrealness, a defiance of genre … I would say those are our assumptions. We get a lot of projects that come in where whoever the party is just thinks, “OK, well, this is weird. You guys figure it out!”

Is there also an assumption that Hiro will direct whatever it may be?

MURAI This isn’t false humility, but I don’t think I’m the best person for every job. Every project is about perspective and life experience — and certain projects benefit from voices that aren’t mine.

What do you find that your partners don’t want to spend money on these days?

MURAI Studios are paying so much more money just because of the COVID aspect of things. All that stuff takes way more resources than before. Things just cost more, and we have to look back and see what the value of each choice is on the story level.

MATTESON Not that independent feature filmmaking has ever been a real breeze, but I think marketing is in a really interesting place. There’s such an enormous offering from every big streamer that’s fighting for space inside the cultural conversation. Fighting for attention when launching a new show is really tricky.

Hiro, how was returning to Atlanta after such a long break?

MURAI Weirdly enough, season three takes place in Europe. So, having not been in the same room together for like four years, we all met up in London. Then we were in production for 10 months, filming the last two seasons back to back and seeing each other every day for almost a year.

What’s the last thing you watched that really knocked your socks off?

MATTESON I got a little obsessive about Bo Burnham’s Inside. I think that’s a sneakily well-made project. It feels like you’re watching a magic trick being pulled off. It felt dangerous, a little bit.

MURAI I’m trying to think of ones that aren’t disparaging of humans I know … I blocked most of them out for my own sanity. I’ll just say there have been many, many times where our camera operators are high by the time the shoot is over due to contact smoke.

Can you tell me who was dressed as Teddy Perkins, the creepy Atlanta character, at the 2019 Emmys?

MURAI I cannot. I have my own guesses. It’s never been revealed to me.

It was a ticketed event. Some people must know.

MURAI I’m dead serious. I saw very stressed-out looking people that evening, trying to coordinate it. I don’t think it was easy. Donald knows, for sure. I’m fairly sure I know who it is, but, yes, it’s one of my fondest memories of making Atlanta.

This story first appeared in the March 9 issue of The Hollywood Reporter magazine. Click here to subscribe.