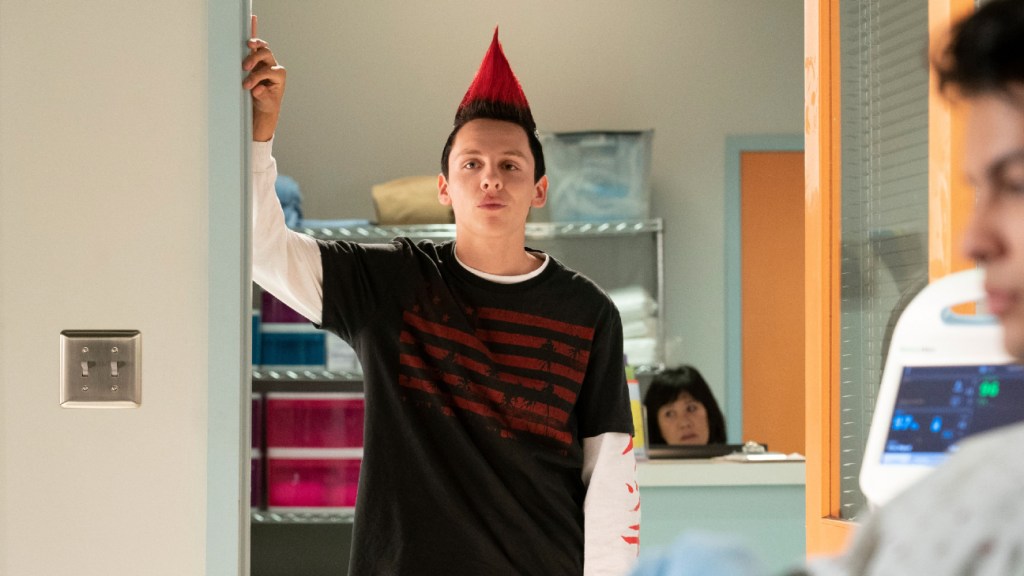 Jacob Bertrand was well aware Cobra Kai fans loathed his Hawk persona — but he relished every moment. In fact, he was having so much fun playing arguably the most detested villain on the series that he pushed back when the writers told him Hawk would return to form as Eli and join the Miyagi-Do heroes.

The Netflix show based on the Karate Kid franchise dropped its fourth season on New Year’s Eve and within days, it was among the top titles on the platform globally, per the streaming giant’s own metrics.

And with the new season came a major change for Bertrand’s Eli as he joined Miyagi-Do Karate. He subsequently won the men’s division of the All Valley Karate Tournament — but not before his precious Mohawk was forcibly shaved off by Cobra Kai students, sending Eli into a short, downward spiral of self-doubt and self-pity, the same emotions which inspired him to initially join karate.

The Hollywood Reporter caught up with Bertrand to talk about the new Cobra Kai season, his character arch and the pure joy of playing a villain, among much more.

Congrats on season four being so well received. How was reaction been for you?

People have been coming up and congratulating me like I actually won something. So that is kind of cool! It is the first show that I have been on that I feel my friends and peers all love to watch. I just have to thank the writers, they are the whole reason we’re here.

Eli/Hawk has had a wild character arc ride over the seasons. Which do you prefer playing, evil Hawk or kind Eli?

Oh, are you kidding me? The villain is way more fun. Playing evil Hawk was the best! I know he was a total dick and a bully to people — but I would break Demetri’s [Gianni DeCenzo’s] arm 10 times over. (Laughs.) But seriously, playing the villain is more fun because it is more out there. When I auditioned for the series, there was no Hawk. There was only Eli when I read the script. It was a challenge for me to wrap my head around doing two completely different characters — but it is the same person who has a little of both inside them.

What is the physical training process like for the series?

I don’t know that it has ever been asked or expected that we do the fighting. In the first season, Xolo [Maridueña] and Tanner [Buchanan] were learning so much and picking it up so quickly that they set the tone. It was like, “Wow, OK, we’ll use the stunt doubles, but the actors can do a lot.” I started the show as a guest star, so I was hopping back and forth and didn’t get to train a lot. The training has gotten more intense as the seasons have gone on. In terms of staying in shape, I run and rock climb a lot. Honestly, it is a lot of stretching when we train — a lot of stretching.

How long is the hair and makeup process with your Mohawk, tattoos and lip?

When I had the Mohawk, I think mine was the longest at just over two hours for the hair, the tattoos and the lip. Now that I have a buzz cut, I am back to 20 minutes, unless my shirt is off. When I first got the role I was like “Oh, man. I have to have a Mohawk? I don’t want to cut my hair, I love my hair.” And then my dad was like, “Dude, I cannot have a Mohawk at my job, and I would love to have a Mohawk at my job.” So I realized how cool it was — and then I grew to love it. When the creators came to me and said they were going to buzz my head, I was like, “Whoa. Hang on there, guys!” But it was the arch for the season, and I am glad they did it.

Talk to me about your experience with the fans. They are hardcore and greatly devoted to the show, as you know.

They are so excited and super energetic! I will say that when season three came out, a lot of people came up to me, with a smile, and said, “You suck. I hate you. You are so evil.” And I would be like, “I know it is rough right now, but I swear I get better!” When I heard I was going over to the good side, I was like, “What? No. I want to be a villain. I want to double down and murder somebody.” (Laughs.) And they were like, “No, no, no. This is going to turn out really good.” And then Hawk went to the good side and everyone was like, “Yay! This is the best thing since sliced bread!”

Is the younger cast close when the cameras are not rolling?

Everyone is really tight, actually. Xolo and I live together when we’re filming. He is like a brother to me. And then Gianni [DeCenzo] is over at our house all the time. We play Magic a ton. We all get together a lot after work. Sometimes we’ll all meet at Peyton’s [List] house and hang out.

Usually, when I work, I am like the son on something or the younger brother. So, it is fun to be on something where we are all around the same age, and we’re all hanging out as budding adults running around Atlanta.

How about working with the Karate Kid OG’s, how has that experience been?

They’re all so different. I really had not worked with Ralph [Macchio] at all until season four. And then we worked together a bunch, so that was really great, getting to know him. He is very professional and knows when to be serious and when to mess around. He likes to play pranks on the crew. Ralph and Billy [Zabka] have the best [Hollywood] stories. Marty [Kove] is just so much fun to work with. When he goes into that John Kreese voice, it is so intimidating, but I freaking love it. I really enjoyed our one-on-one scenes.

And finally, is there any little tease you can give for season five?

Oh yeah, barring my death scene, there are some fights. (Laughs.) In all seriousness, it is crazy, and it sets up for a kick-ass season six.