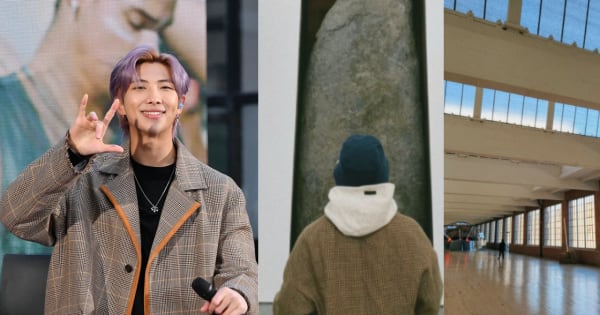 BTS’ leader Kim Namjoon is currently in the US, Namjooning as y’all know ARMY. The art aficionado has been touring the museums and also sharing pictures of the same on his newly opened Instagram account. Though BTS has taken a break from work, the boys are ruling the roost on Instagram and RM aka Kim Namjoon is one of them. Despite their mammoth size global success, BTS is known for their humility. And their leader keeps reinstating the same time and again. RM’s recent interaction with a museum employee has grabbed the attention of the ARMY. It’s RM’s humble attitude that’s been making BTS ARMY’s heart flutter. Also Read – BTS: V’s Our Beloved Summer OST teaser OUT; song to release on THIS date

A female employee who worked at New York’s Dia: Beacon museum came across the pictures that Namjoon shared on his gram that ARMY had reshared across various social networking sites. The lady saw the pictures and narrated the whole incident on Twitter. RM had visited Dia: Beacon, a museum in New York that hosts a collection of art from the 1960-70s. He had captioned the pictures as “1960-70s,” as well. The female who goes by the name Lady ‘Mrs. Revenant R’ on Twitter revealed that she worked at the museum and also lamented that she couldn’t recognise RM of BTS. The lady also said that she even asked him to maintain a safe distance from the art. She revealed that the world’s Biggest Boyband leader was extremely polite and even apologised to her in gestures and signed that he had heard her even though she was across the hall. Also Read – BTS x Kabhi Khushi Kabhie Gham: TaeKook stans cannot miss Deewane Hai Dekho featuring V as Poo and Jungkook as Rohan Raichand – watch video

The lady then went through Namjoon’s Instagram post and realised that she had seen RM multiple times that day. She revealed that he was occasionally joined by his friend but was mostly alone. The lady revealed that RM spent about 45 minutes in Donald Judd gallery all alone. She added that he seemed to be enjoying it very much. Awww! Namjoon, Namjooning is the best thing on the internet and we are so in love with this. Check out the snapshots of the tweets here: Also Read – BTS: Jimin shares throwback pics of hair extensions and we want someone to cast him in a mythological, historical K-drama soon 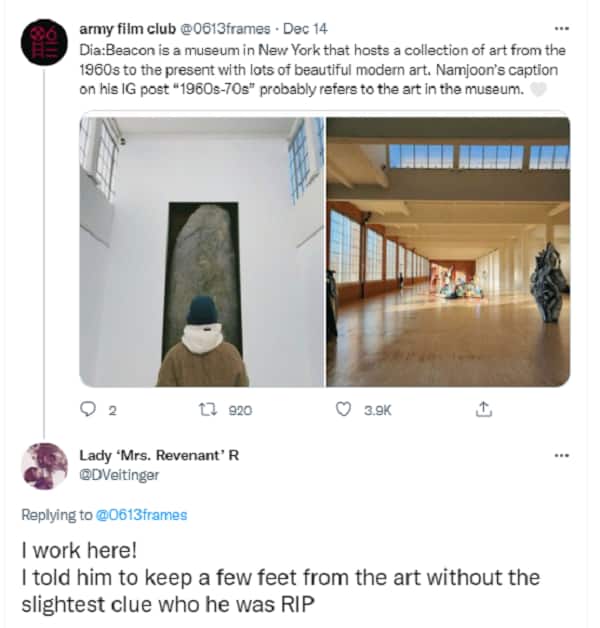 RM’s Instagram account is an archive that also suits his IG handle rkive very well. BTS’ leader is sharing his love for art and ARMY is busy falling for him and all things he loves.