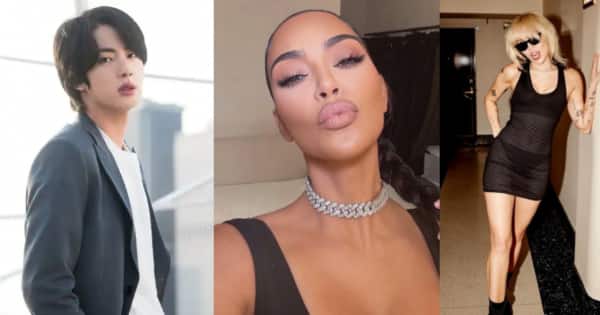 It’s time to take a recap of all that happened in the world of Hollywood. Among the newsmakers of the day, we have celebrities like BTS member Jin, Kim Kardashian-Miley Cyrus-Pete Davidson, Squid Game star Lee Jung Jae, Kylie Jenner and Kris Jenner and many more. BTS member Jin remained in the headlines as he made a shocking revelation about his losing weight due to COVID-19. Kim Kardashian seems to have called for rivalry with Miley Cyrus over Pete Davidson. So without any further ado, scroll on to get all the dope from Hollywood. Also Read – BTS: Jin and J-Hope’s funny banter on Instagram will leave ARMYs in split

BTS member Jin who had recently tested positive for COVID-19 made a revelation that he lost almost 4 kilos due to sickness. He commented on a picture dropped by J-Hope. He wrote in Korean, “Jwe-Hope I lost 4kilo (grams). You should have to buy me a meal.” J-Hope replied saying, “jwan…I feel sorry about that.” Also Read – BTS: Jungkook wins hearts as he gives a shout out to Newnion crew after they lose Street Dance Girls Fighter

Miley Cyrus recently co-hosted Miley’s New Year’s Eve Party with Pete Davidson in Miami. Miley and Pete were a couple in the past, and now the hunk is rumoured to be dating Kim Kardashian. Fans have now noticed that Kim Kardashian is no more following Miley Cyrus on social media. Okay then!

Star Lee Jung Jae’s team has released a statement saying that he will not be attending Golden Globes 2022 even though he has been nominated for his performance in Squid Game. The statement states that since Netflix isn’t participating and here is COVID-19, he has decided to not attend the event. “He is immensely grateful to have been nominated in the Best Actor category at the Golden Globes, but he has decided not to attend the ceremony. He recognizes that Netflix is not participating in the Golden Globes, as has been widely reported around the world. He also made the decision considering other factors like the COVID-19 situation and the quarantine requirements,” reads the statement.