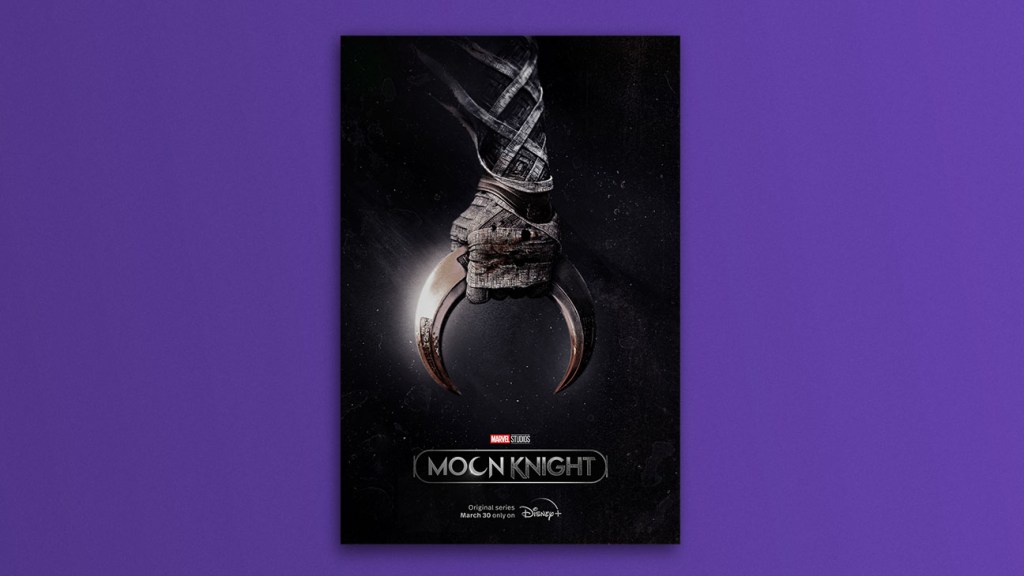 Chaos reigns in the mind of Steven Grant. Or is that Marc Spector? Dueling personalities come to a head in Marvel Studios’ Moon Knight, based on the cult comic hero of the same name, and created by head writer Jeremy Slater. Unlike Marvel Studios’ previously released Disney+ series, all existing in and impacting the larger MCU, Moon Knight, isn’t anchored by a character familiar to audiences who have been following along with in the MCU for the past 14 years.

The series is anchored by Oscar Isaac, which has certainly drawn increased interest in the character. Still, Moon Knight is something of a mystery to audiences who haven’t tapped into his comic book lore, and the series first trailer seems to relish in maintaining at least some of that sense of mystery. What is obvious is that Moon Knight is shaping up to be one of the darkest projects to emerge from Marvel Studios, and with a March 30 debut, it’s situated to launch the MCU’s horror-centric corner, a month ahead of Doctor Strange in the Multiverse of Madness (in theaters May 4).

Created by Doug Moench and Don Perlin in 1975, Moon Knight got his start in Marvel’s supernatural side, debuting in Werewolf by Night No. 32. Originally depicted as an antagonist to Marvel’s resident werewolf, Jack Russell, the two-part story saw the character redeemed in the last act, recognizing Russell as a victim rather than a weapon. The character’s popularity increased over the next five years as he made guest appearances in books like The Defenders and The Spectacular Spider-Man, and a back-up feature in Hulk! Magazine. Along the way, Moench continued to put his stamp on the character, fleshing out Moon Knight through multiple identities, the wealthy financier and art collector, Steven Grant, the down-to-earth cabbie, Jake Lockley, and the former mercenary, Marc Spector, who was Moon Knight’s original personality.

While the term schizophrenia gets lovingly thrown around by Grant’s girlfriend, Marlene Alraune, and Marc does occasionally have difficulty distinguishing his separate personalities, the accurate diagnosis of dissociative identity order didn’t come until much more recently in the character’s comic history, notably in Charlie Houston’s run in the mid-2000s. Since then, other writers who have taken on the character, Brian Michael Bendis, Warren Ellis, Cullen Bunn, Jeff Lemire and Jed McKay have dived deeper into his psychology, and introduced several other alters besides Grant and Lockely, and a few different version of Moon Knight, including the three-piece suit-clad consultant, Mr. Knight.

Based on the trailer, it appears Moon Knight will primarily draw from the modern interpretations of the character’s dissociative identity disorder, with Spector losing time as he enters his alters. Grant is the alter primarily featured in the trailer and he seems to be a museum employee specializing in antiquities. As for Isaac’s accent that had some viewers scratching their heads, its an affectation of Grant, a role Spector is inhabiting based on his perception of that type of individual. Basically, think M. Night Shyamalan’s Split, but with a guy in a costume. If the accent rings false, that’s because it’s supposed to. Spector isn’t British, but he has an alter that believes they are.

But wait there’s more! Moon Knight didn’t receive his first solo series until 1980, penned once again by Moench and illustrated by Bill Sienkiewicz. In that debut issue, it’s revealed that Moon Knight’s origins are, in part, supernatural. As a mercenary, Spector was second-in-command to the sadistic Raoul Bushman. After betraying Bushman in an attempt to save innocent lives, Bushman kills Spector. But Spector is resurrected by the Egyptian god of the moon and vengeance, Khonshu to protect the innocent and redeem his mercenary past. Later volumes revealed that Khonshu had been a part of Spector since childhood and may have even been the cause of his dissociative identity disorder, his personalities reflecting the phases of the moon.

Viewers got a quick glimpse of Khonshu in the trailer as a bird headed statue in the museum where Grant seems to work, though expect Khonshu to be more than a statue in the series and appear as another one of Spector’s alters.

The series is definitely leaning into the supernatural side with Moon Knight, as his mummy-like costume magically enshrouds Spector, and the hero is seen beating up some kind of creature in a restroom. That creature may be tied to series villain, Arthur Harrow (Ethan Hawke), a very minor character in the Moon Knight mythos, who only appeared in one issue, Moon Knight: Fist of Khonshu No. 2 by Alan Zelenetz and Chris Warner. In that appearance, Harrow was a scientist continuing the work of Nazi scientists who sought to make the human body invulnerable to pain, a means to conquer his own chronic suffering.

Harrow experimented on Mexican peasants, creating a small battalion of mind-controlled subjects that would not stop fighting despite broken bones and other injuries accrued. Harrow managed to escape Moon Knight’s grasp and hasn’t been utilized again since 1985 (though it seems likely the comics will change that point soon). While it may seem odd that such a significant actor as Hawke, who said his portrayal was inspired by cult leader, David Koresh, is playing such a minor Marvel villain, fans have theorized that he might be an amalgamation of another Moon Knight villain: The Sun King.

The Sun King, known only as Patient 86, created by Max Bemis and Jacen Burrows debuted in Moon Knight No. 188 in 2017. A bipolar individual, who became the manifestation of Khonshu’s father, Amon Ra, The Sun King has the ability to manifest flames and enshroud his body in them. He amassed an island of worshipful followers and set about with a plan to destroy Moon Knight and Khonshou, though later events would see the two become allies against the sadist cult, Societe des Saqiques. Given the cult-like worship of Harrow displayed in the trailer, it certainly seems Harrow will be vying for his own deity-derived powers, one that may force his followers to become zombies immune to pain like his comic book namesake. Mental illness, ancient religions, Nazi experiments, cults, superheroes, and monsters — Moon Knight is certainly shaping up to be one of the MCU’s most original properties, even if only half of those things turn out to be true.

While there’s still much to be revealed about Moon Knight, including the larger supporting cast, which has been kept surprisingly hush-hush, Moon Knight paves the way for Marvel’s supernatural team, Midnight Sons. With Mahershala Ali’s Blade gearing up for production, Black Knight’s (Kit Harrington) debut in Eternals, Agatha Harkness (Kathryn Hahn) set for her own series, Gael Garcia Bernal cast as Werewolf by Night in Marvel Studios’ upcoming Halloween special, Morbius (Jared Leto) launching a new franchise in the MCU-adjacent Sony Universe of Marvel Characters, and Ghost Rider and Clea rumored to make their MCU debuts sometime soon, we might see Marvel beat Universal to the punch when it comes created an interconnected “new world of gods and monsters.” And Moon Knight will be the start of that, leading the MCU, and its fans, into the dark.