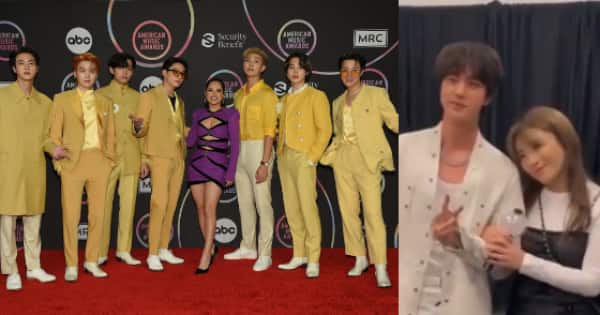 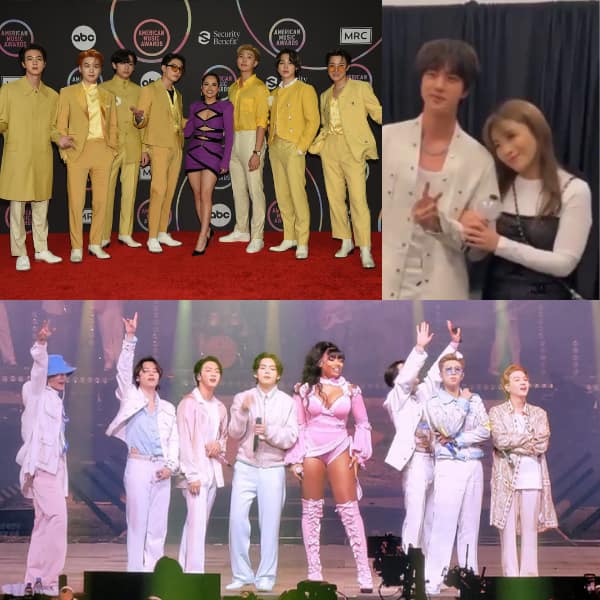 Hola BTS ARMY! A lot has been happening in the lives of your favourite septet – RM, Jin, Suga, J-Hope, Jimin, V and Jungkook. They are in LA and the first leg of their four-day concert is done alongside their appearance on AMAs, The Late Late Show with James Corden, the Grammy nominations and what not. Today, we will be having a dekko at the 5 of BTS’ interactions with female celebrities that made us fall in love with the Bangtan Boys evermore. Also Read – Shraddha Kapoor once AGAIN proves to be a part of BTS ARMY; sings My Universe to her dog – watch

J-Hope and Becky G had a mini-reunion at the American Music Awards 2021 (AMAs 2021). The Korean rapper and the Latino songstress had collaborated on the Chicken Noodle Soup song which is quite popular amongst BTS ARMY. Hobi throwing hearts to Becky and the latter blowing a flying kiss to him will forever feel special. Their friendship is eternal and lovely. Check out the moment here:

Namjoon vibing high on Have Mercy

At the AMAs 2021, BTS watched various bands, artists perform on stage and one of them was Chloe Bailey. The songstress performed on Have Mercy at the American Music Awards this year. And Namjoon vibing high during the performance video is going viral. Well, Chloe brought such amazing energy on stage that nobody could not vibe to Have Mercy. Check out BTS’ reaction to the same here:

Silk Sonic member Anderson Paak dropped by on the first day of BTS’ Permission To Dance on stage concert in LA. Thereupon, he, his wife and their son got a chance to meet with BTS backstage. Just like their son, Jaylyn is a huge fan of BTS, especially Jin (We can understand why). And she grabbed the opportunity to pose solo with Jin at that moment. the video of the same went viral on social media like fire. The lady held Jin’s hand and tilted her head on his shoulders a bit while posing. Jin was visibly flustered. However, Paak was very cool about it. Check out the video below:

? shes a married person so..
?? its okay, its okay pic.twitter.com/Oh4vBc99TN

Megan and BTS at PTD on stage in LA

Megan Thee Stallion made a surprise entry at BTS’ concert in LA. The boys were very gracious and had a blast with Megan on stage. They even asked her to take the centre stage when performing, winning over ARMYs hearts yet again.

hobi was leading megan to the front omg? pic.twitter.com/Jrqtei4o1v

Two more days of BTS’ concert in LA remains after which the boys will return to their home country, South Korea. There they have the MMAs. It is said that BTS will have their world tour in 2022.