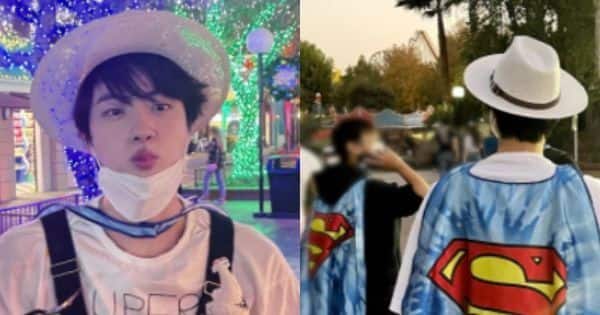 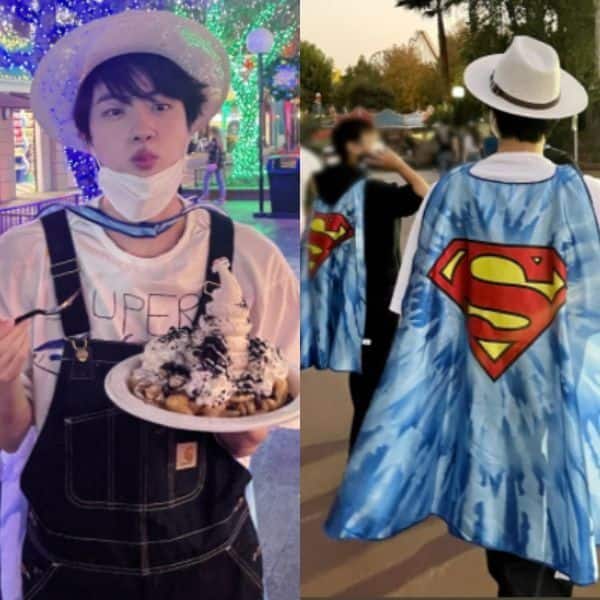 There is no denying that BTS Jin has been one of the superstars of the Permission To Dance concert happening in Los Angeles. From his stable vocals, moves and antics, he has given ARMY an enjoyable experience and we have more in store. Jin said he had been sleeping ever since he got to Los Angeles. Well, he was super energetic at the concerts. After the second concert, he headed to the Six Flags amusement park in Los Angeles. It is a known fact that he loves roller coaster rides. He is a true blue Sagittarian who gets a kick from the adrenaline rush. Well, Jin has shared his moments with one and all. He said that one ARMY came upto him and asked him if he was Worldwide Handsome. Jin said he was slightly taken aback. The singer made sure he had a swell time at the theme park. He donned a Superman cape, and made sure his staff and bodyguards also got one. Just check out this picture… Also Read – BTS LA concert: Jungkook rips off his shirt while leaving the stage and ARMY goes ‘HOLY S**T’ over his chiseled muscles – read tweets

omgg seokjin made a little superman squad with the staffs so cute ??? pic.twitter.com/av0fZ9D2Iv

As you see, Jin fans cannot get enough of his cuteness. They are wondering how he managed to get everyone wear the capes. But then, who can say no to Kim Seokjin. The handsome singer also made friends with the manager who treated him to funnel ice cream with waffles and oreo. He shared a picture with fans. It is no secret that he makes friends wherever he goes. Remember that Indian guy in one of the videos. He is truly living the life out there… Also Read – BTS: ‘Thank you ARMY, I Love You,’ overwhelmed Jin expresses gratitude as birthday wishes flood in with Moon ARMY Bombs at SoFi

Seokjin is too cute for my own good , damn I wanna smooch him pic.twitter.com/0cS6wpJoTW

Jin is riding high on the success of his solo song, Yours which is a part of the TV show, Jirisan airing on Korea’s cable TV. He has been super cute at the LA concerts too. His birthday is coming up in a couple of days and BTS Army will surely go wild. Also Read – BTS Rise of Bangtan: When V’s ‘Nico Nico Nii’ in the middle of concert performance left Jimin in splits of laughter [VIDEO]