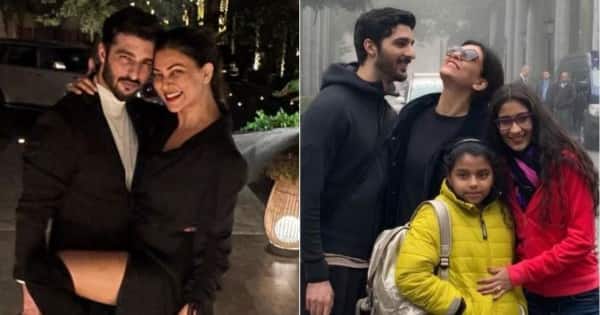 There were reports that Sushmita Sen and boyfriend Rohman Shawl have parted ways. However, yesterday the actress confirmed that they are no longer in a relationship but they are still good friends. Sushmita posted a picture with Rohman on Instagram and wrote, “We began as friends, we remain friends!! The relationship was long over…the love remains!! #nomorespeculations #liveandletlive #cherishedmemories #gratitude #love #friendship I love you guys!!! #duggadugga.” Now, Rohman has opened up about the breakup. The model re-shared Sushmita’s post on his Instagram handle. Also Read – Sushmita Sen, Shamita Shetty, Ekta Kapoor and more: 7 unmarried Bollywood celebs who are single and happy

One of the comments on Rohman’s post read, “U owe so much to her brother. Never forget that.” He replied on the comment, “I can never ever forget that !! She is my family.” Also Read – From Sushmita Sen-Rohman Shawl to Hrithik Roshan-Sussanne Khan: These 6 celeb couples remained friends after break-up

It was in 2018 when Sushmita and Rohman had made their relationship official. The model was a part of the actress’ family and even gelled up very well with her daughters, Renee and Alisah. Well, fans of Sush are a bit sad because of this breakup as she and Rohman always gave couple goals on social media.

On the work front, Sushmita is currently enjoying the success of her show Aarya season 2 which started streaming on Disney+ Hotstar earlier this month. Season one of the show had also received a great response, and Sushmita had won many awards for her performance in it.

The actress had shot for Aarya 2 amid the pandemic, and while talking about it, she had earlier stated, “We’ve become lockdown specialists now! We either release during a lockdown or shoot during it, that’s our new thing! When we completed the shoot for Aarya 2, on our farewell, we said how blessed we were to be working during the pandemic. There were so many people who had to sit at home, but this is also a nice culmination of teamwork. We had Disney+Hotstar, Ram Madhvani film, the entire crew and the cast together. Everyone just pulled in following the rules and making it possible.”