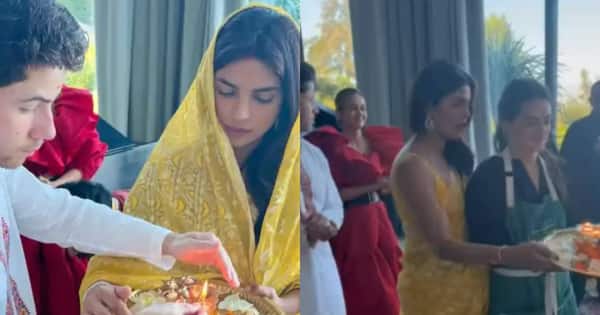 Priyanka Chopra and Nick Jonas’ video of performing aarti at their home is going viral now. The fans of PeeCee and Nick are lauding them for their simplicity and purity.

Priyanka Chopra and Nick Jonas’ old video from their Diwali puja at home is going viral on social media. Priyanka Chopra is seen in a yellow saree whereas Nick is seen standing behind her in a white kurta and pyjama. Priyanka seems to be performing puja with their American chef Sami Udell. Fans have lauded Priyanka for following the Hindu rituals religiously even outside India. Fans are happy that she included her chef while performing the puja at home. The video that is going viral is from the puja that she conducted at home during Diwali last year. Priyanka and Nick Jonas’ fans have hailed them for their purity and simplicity. Also Read – CRAZIEST things fans of Shah Rukh Khan, Kartik Aaryan, Kareena Kapoor Khan and more stars have done for their fave Bollywood celebs

Meanwhile, in the last couple of weeks, Priyanka and Nick grabbed headlines for their alleged separation, pregnancy rumours and more. Also Read – Before Anushka Sharma in Chakda ‘Xpress, Kangana Ranaut, Taapsee Pannu and more actresses who have played sportswoman in movies