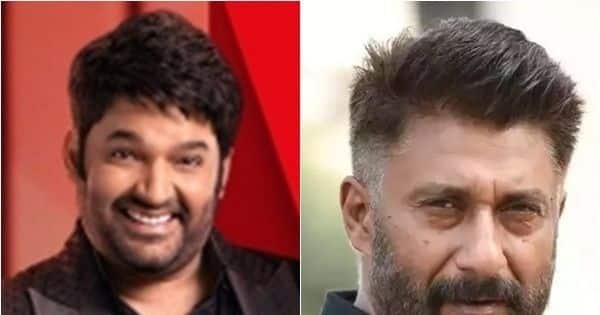 Have you heard of the phrase, ‘Beware of the half-truth. You may have gotten hold of the wrong half?’ Most of us must have had. Before the rise of social media, people were less exposed to misinformation. Today, people have access to tons of information on daily basis that it becomes difficult to verify its authenticity. Many social media users tend to believe what they are being fed by highly influencial figures and the chaos follows. But what if the things that you hear, read or see is a cognitive bias? The recent fiasco between Kapil Sharma and The Kashmir Files director Vivek Agnihotri is the perfect example of ‘Never believe a one-sided story.’ Also Read – Shah Rukh Khan, Sara Ali Khan, Vijay Deverakonda and more Top 10 viral pictures of your favourite celebs trending today

It all started when a Twitter user asked Vivek Agnihotri why he was not promoting his film on The Kapil Sharma Show. The director replied to the query saying that he wasn’t invited to the show given his film, The Kashmir Files which deals with the mass exodus of Kashmiri Pandits from the valley in the 1990s, doesn’t have a big starcast. Things escalated from there on and many people started calling for a boycott of the popular comedy show. Also Read – Trending Entertainment News Today: Shah Rukh Khan’s shirtless look from Pathaan goes viral; Gauahar Khan indirectly calls The Kashmir Files a propaganda film and more

Among them, one person, who seemed totally convinced by the theory that Kapil intentionally didn’t invite The Kashmir Files cast on his show and joined the boycott wagon, questioned the ace comedian about his stand. “#KashmirFiles ko promote karne se kyu ghabra gaye Kapil? Kis baat ka dar tha jo #VivekRanjanAgnihotri aur unki film ki suprasiddh starcast ko apne show par aane ka nyota nahi dia? I used to be a big fan of yours bro, but you have disappointed me and millions of #TKSS fans. Boycotting U,” the fan tweeted. Also Read – TOP TV News Today: Kapil Sharma thanks Anupam Kher for clearing the air on The Kashmir Files row, Kamya Panjabi shares a video with late Pratyusha Banerjee and more 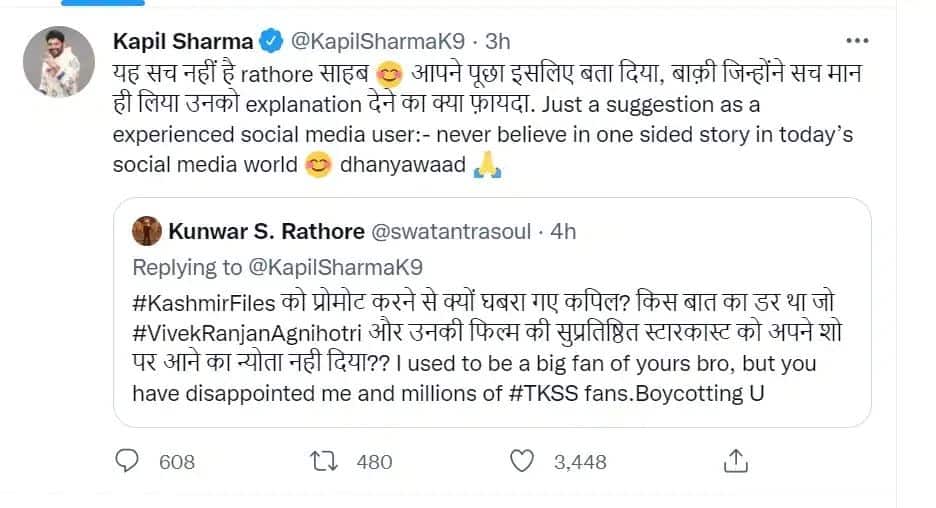 However, people were reluctant to take Kapil’s honest clarification seriously, probably because it didn’t fit their narrative. But it was just a matter of time the truth had to come to the fore, which fortunately came from a veteran actor like Anupam Kher, who is an integral part of The Kashmir Files, followed by director Vivek Agnihotri too.

Clarifying the misunderstanding, the actor said that he was invited to the show but given the serious subject of the film, he decided to give the show a skip because it deals in comedy and it was not the right platform to talk about the film. He also said that Kapil doesn’t have any malice towards the film or its cast. Agnihotri resonated with Kher during the same interview and said that he only tweeted what he was told by the production house adding that he has no malice towards the comedian.

When Kapil thanked Kher by sharing a snippet of his interview, the veteran actor wished the comedian had shared the entire video which also includes Agnihotri’s statement instead of the ‘half-truth.’

And that’s how the entire controversy, that began with the half-truth, died its natural death.