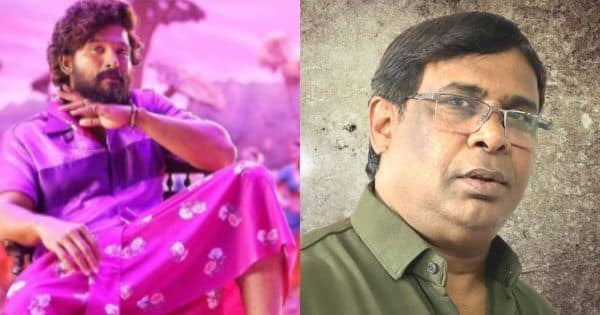 Pushpa is a rage all over India and how. Sukumar, Allu Arjun, Rashmika Mandanna and co have delivered a movie that is a true mass blockbuster. The composer for the film is Devi Sri Prasad. Raqueeb Alam who has given Hindi lyrics for many South movies wrote the Hindi version of the songs. Fans who have heard Uppena songs will remember him from the lines Ishq Shifaya from Nekanne Neeli Samudram. Theviraltime got in touch with lyricist Raqueeb Alam who made a few interesting statements in our EXCLUSIVE conversation. The first one being the song Bhago Bhago Bakre was written just overnight. He tells us, “I got a call from Devi Sri Prasad’s team that I need to come to Chennai immediately. He narrated the whole situation and theme to me. The video was shot. When I realised that the song was for Allu Arjun, I was elated. It wrote it in just one night. The song is about the reality of life. I must thank Vishal Dadhlani for how he infused life with his vocals.” Also Read – Pushpa: Sophie Choudry croons Allu Arjun, Samantha Ruth Prabhu’s Oo Antava; Allu Sirish finds a mistake

Raqueeb Alam has had a great relationship with Devi Sri Prasad. “He and I are long-time collaborators. He does not approach anyone else. Devi Sri Prasad has exceptional sense of music and what a script demands.” The songs Saami Saami, Srivalli and others are a rage now but Raqueeb Alam says he finds it hard to work in Bollywood. “The thing is music composers hardly have any autonomy over their work in Bollywood. They have to work as per diktats of the producers. Moreover, there is too much groupism. I hardly get any work in Bollywood,” he says. Also Read – Trending Pics of the day: Mouni Roy marries Suraj Nambiar, Anushka Sharma gets sunkissed and more

Raqueeb Alam also said that Hindi music composers have a mistake by dumbing down their audience. “A lot of people are responsible for deteriorating lyrical quality. I have heard of how good writers are told to write easy words that fans can identify with. I do not get the logic. If a song is a hit and people do not understand a word, they will look up on Google for it. Even a word like Asharfi is considered as tough in the industry. I remember having to compose lyrics for a singer. He gave me some 40 words and said to write a number incorporating only those words. I do not blame him as his Hindi wasn’t great but you cannot expect quality work like this,” he said. Also Read – Trending South News Today: Nagarjuna denies statement on Samantha Ruth Prabhu-Naga Chaitanya divorce, Allu Arjun reacts on DJ Bravo’s Srivalli version and more