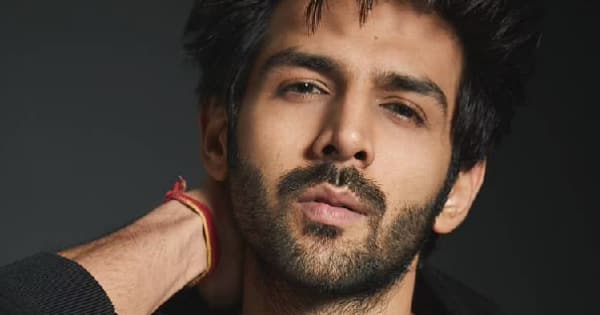 Kartik Aaryan has comfortably made a place for herself in the industry and audiences hearts. He enjoys a crazy fan following who would do anything for him. We remember how two girls stood outside his house and yelled his name just to catch his attention. And even the fan who got inked of his name. Well, here is another fan story. The actor shared a video on his Instagram acccount with a cute little girl and instead got a Rs 20 crore deal for himself. A fan commented that she is willing to give him Rs 20 crore to marry her. Also Read – Shah Rukh Khan, Ranveer Singh, BTS Jin and SUGA, Kartik Aaryan – 5 male celebs whose long hair amplified their sex appeal – view pics

The video shared has a cute girl saying his Dhamaka dialogue. He shared it with the caption, “Cutest #ArjunPathak.” A comment on this video caught our attention. A fan commented, “Achha mujhse shaadi karlo 20 crore dungi.” To this, Kartik had a cool answer. He answered, “Kab” which means when. Fans are tripping over this comment of Kartik Aaryan and telling him well done. As a lot of people started saying that they want to marry him, Kartik commented, “bidding shuru karein?” Lol! Also Read – BL Awards 2022: Sidharth Malhotra, Kiara Advani, Vicky Kaushal, Kartik Aaryan and more – Vote for the Best Actor and Actress in OTT – Hindi Movies category 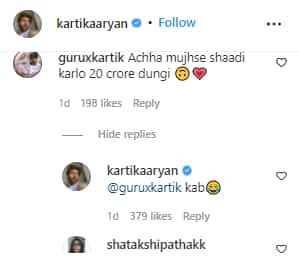 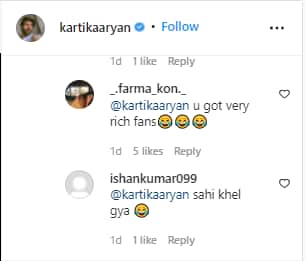 Meanwhile, Kartik recently opened up about his mother battling with cancer. He had called it an emotional time for the family. He said, “It is not a disease that we should be very afraid of. Today we have many facilities because of which we can come to know about it much in advance. I would like to share how important it is for all of us to go for regular health check-ups, so one can know at an initial stage if they have cancer, and they don’t have to go to a stage where it becomes scary. One can get treated early on.”