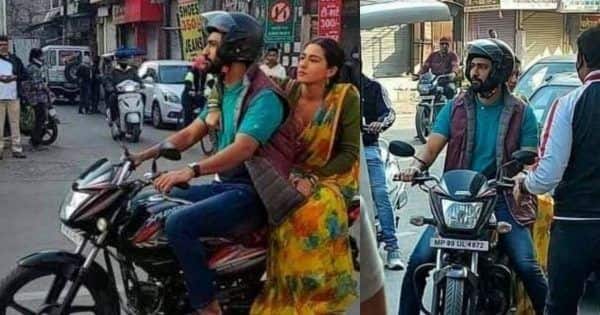 A police complaint was been lodged against Vicky Kaushal on Sunday, 2nd January, in Indore. The matter: A local resident took issue with Vicky Kaushal riding a motorbike, alleging the illegal use of his license plate number, claiming that no permission was taken prior to said license plate number being used on the actor’s vehicle. Sara Ali Khan was also seen riding pillion with the actor, but her name wasn’t dragged in the complaint. The complaint was registered by one Mr. Yadav after photos of Vicky Kaushal and Sara Ali Khan riding the motorbike went viral. It was for a film shoot though. Also Read – Katrina Kaif flaunts her mangalsutra in happy pictures from her ‘home sweet home’; we miss Vicky Kaushal in the frame

The complainant had told ANI, “Vehicle number used in the movie sequence is mine; don’t know if the film unit is aware of it. This is illegal. He cannot use my number plate without permission. I have filed a complaint with the police. Action should be taken in the matter.” Check out the picture below that led Yadav to file a formal complaint with the Indore police. Also Read – Vicky Kaushal’s father Sham Kaushal’s workout video goes viral; netizens say, ‘Bahu Katrina Kaif ka asar hai’

The police then landed on the sets of the film to investigate the matter, where they learned that the number plates were different. “During the investigation of the number plate, we found out that all misunderstanding was caused by the bolt fixed on the number plate. Due to that bolt, the number one is looking like number four. The number used in the movie sequence belongs to the movie production. Hence nothing illegal had been found out in our investigation,” Rajendra Soni, sub-inspector, Bangangam, Indore said. Also Read – HOT Scoop: Farhan Akhtar and Shibani Dandekar all set to get married in March 2022? [Exclusive]

As we said, the incident was quite bizarre, but we hope that all the parties involved are now satisfied and can move on with their lives in more fruitful directions.