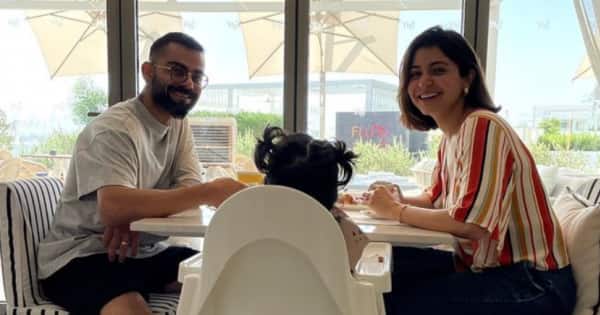 Ever since the birth of their daughter Vamika, Virat Kohli and Anushka Sharma have requested fans and media to not click pictures of their little one. For almost a year, Virat and Anushka managed to shield their daughter and keep her face hidden from fans. However, in yesterday’s match, Vamika’s face got revealed as the camera panned over her and Anushka. They were in the stands cheering for Virat Kohli and Vamika got captured in lenses. The pictures got widely circulated on social media with Virushka’s fans gushing over Vamika’s cuteness. However, now, the couple has penned a note on Insta stories about the incident. Also Read – Anushka Sharma-Virat Kohli’s daughter Vamika’s pics go viral; fans express anger over breach of privacy – read tweets

Anushka and Virat took to Insta stories to share an identitical note saying that they were caught off guard and didn’t know that the lenses were on Vamika. They requested everyone to not share pictures of Vamika on social media. Their note read, “Hi guys! We realise that our daughters images were captured at the stadium yesterdy and widely spread thereafter. We want to inform everyone that we were caught off guard and didn’t know that the camera was on us. Our stance and request on the matter stays the same. We would really appreciate if Vamika’s images are not clicked/published for reasons we have explained earlier. Thank you! (sic)”. This is not the first time that Vamika got clicked while attending a cricket match. However, earlier in the pictures, the face of Vamika was covered by a heart emoji. Also Read – Netizens dig out Virat Kohli’s childhood pictures as they shower love on Vamika; call her ‘Junior Kohli’ – Read adorable tweets

Quite a few fans of Virat and Anushka too expressed their angst on social media as Vamika’s images went viral. Netizens spoke about breach of privacy and extended their support to Virushka. For more updates, stay tuned to Theviraltime.