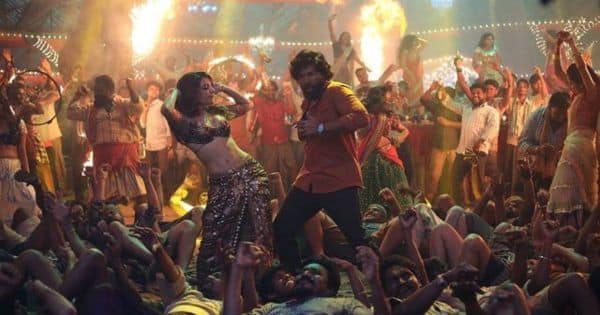 Pushpa is setting records in this critical pandemic times. Allu Arjun’s movie is a superhit one in the South and North India. A post-release success meet was held yesterday in Hyderabad. In the event, Allu Arjun thanked Samantha Ruth Prabhu for doing the Oo Antava song. He said she did the song based on the kind of trust and belief she had on Allu Arjun and the team of Pushpa. The song is No. 1 on YouTube. The number has caught on with its beats and catchy lyrics. Samantha Ruth Prabhu is looking gorgeous in a skirt and top. Also Read – Pushpa box office collection day 12: Allu Arjun starrer ROCK-STEADY in Hindi belt; closure of cinema halls up North has no effect

Allu Arjun said that Samantha Ruth Prabhu had a number of doubts doing an item song. It seems she kept on asking everyone if it was looking right or not. Allu Arjun has been quoted as saying, “But I only said you one thing trust me and do it and after that, you didn’t even ask me one question. Thank you for doing everything we have asked, you have won my heart and respect.” He congratulated her for the success of the song on YouTube. The song has been loved by everyone. Allu Arjun’s gracious words touched Samantha Ruth Prabhu. The actress said she would always trust him from now on. Also Read – Annaatthe composer D Imman formally announces his divorce from Monicka Richard after 13 years of marriage

Thankyou @alluarjun garu for your words!@Samanthaprabhu2 ❤❤

And now I will always trust you @alluarjun ??‍♀️ https://t.co/EQOGv6M10F

The actress wrote on Instagram that it was tough an item song as being sexy on screen is not as easy as it looks. She posted a picture with the caption, ” played good , i played bad, i was funny , i was serious, i was a chat show host too.. i work really hard to excel at everything that I take up …but being sexy is next level hard work….phew #ooantavaooooantava Thankyou for the love.” Also Read – Pushpa: Allu Arjun gets emotional on film’s success, promises Rs 1 lakh reward to each crew member

Samantha Ruth Prabhu is reportedly super focused on her career after her split with Naga Chaitanya. There were rumours about how the actress’ bold career choices did not go down well with Naga Chaitanya. None of them have said anything about the same. Pushpa also stars Rashmika Mandanna, Fahadh Faasil and Vennala Kishore.