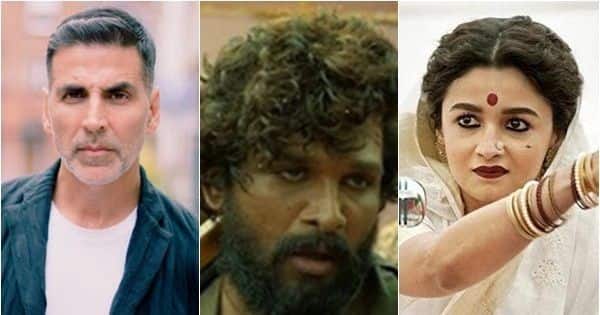 We saw many Bollywood films releasing in theatres amid the pandemic restrictions, however, only a few movies such as Antim, Sooryavanshi, Atrangi Re and the recent being Gangubai Kathiawadi managed to earn moolah at the box office. While Bollywood was struggling to revive theatres, Allu Arjun and Rashmika Mandanna starrer Pushpa became a rage at the box office, which turned it into the highest grossing movie of 2021. When Akshay Kumar was asked if south films are posing a threat to Hindi films, the Bachchhan Paandey actor wished that every film should work at the box office. Also Read – Bachchhan Paandey: Akshay Kumar reveals the REAL reason why he signed the film and it has a Khiladi connection

“All kinds of films work, be it content cinema, massy cinema and if there is a combination of massy films with content, then it is like sone pe suhaga. So, all films are working. See how Gangubai Kathiawadi is released and it is working. The industry has suffered terribly in the last two and a half years because of the pandemic. Films of so many people are stuck and the interest is mounting. My own film Sooryavanshi was ready but could release only after one and a half years. So let’s not analyse too much. I hope that people go out and watch films. It is important for us. We should pray that all films work at the Box Office,” Akshay said at a recent press conference while promoting his upcoming film Bachchhan Paandey. Also Read – Rakhi Sawant turns Gangubai Kathiawadi, dances to Dholida and mouths Alia Bhatt’s famous dialogue; fans say, ‘Alia se achcha tum kar rahe ho’

Akshay is known for releasing 3-4 films a year. He has also completed shooting for his upcoming films such as Prithviraj, Raksha Bandhan, Ram Setu, Bachchhan Paandey and Mission Cinderella. When asked about back-to-back threatrical releases, Akshay said that he doesn’t work for money but passion. Also Read – Ranbir Kapoor plays a protective boyfriend to Alia Bhatt after dinner date, fans go gaga over their chemistry [VIDEO]

“People often tell me how I manage to do so many films in a year. I get astonished at how someone can not work every day. As a child, I was taught to get up early, attend school, come back, do homework, play for sometime and sleep. I still follow the same routine. I choose to go to work in the morning and take a break on Sundays (to spend time with family). If you continue to work everyday, then easily you have many films in the pipeline. Everyone was working in the pandemic, including the policemen, media photographers and others. Everyone has to earn money,” he said.