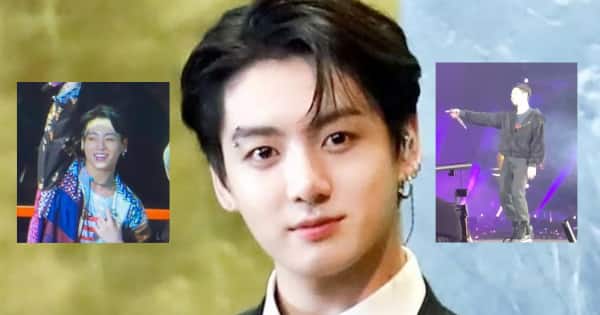 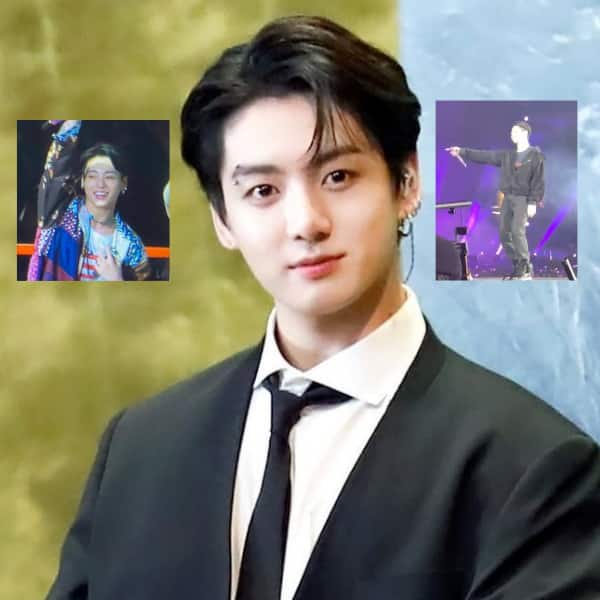 Bangtan Boys – RM, Jin, Suga, J-Hope, Jimin, Taehyung and Jungkook – are done with two days of the concert at LA’s SoFi stadium. Two more days of the BTS concert remains. The septet will perform at the SoFi Stadium on 1st and 2nd December. The mania behind the boys is not going to die down as this is their first-ever offline concert in presence of ARMY. The hype is too surreal. We have made a compilation of some of BTS member Jungkook’s moments from SoFi that will always stay with us forever and we know with you too, ARMY. Let’s check them out below: Also Read – BTS LA concert: Jungkook rips off his shirt while leaving the stage and ARMY goes ‘HOLY S**T’ over his chiseled muscles – read tweets

A video from the backstage of BTS’ PTD on stage at the LA concert is going viral. It features the boys going backstage to change their costumes. And Jungkook’s shirtless video has grabbed the attention of the BTS ARMY. Check out the video below: Also Read – BTS: ‘Thank you ARMY, I Love You,’ overwhelmed Jin expresses gratitude as birthday wishes flood in with Moon ARMY Bombs at SoFi

What the!!! Jungkook shirtless?!!! https://t.co/q5TyobPHHs

Whenever the Golden Maknae is on stage, there are both hot (read sexy) and some adorable and emotional moments. Here’s when the youngest BTS member’s energy was on peak. His vibes on Baepsae are always a notch higher and it’s super HOT. Even V aka Kim Taehyung goes crazy during Baepsae. Check out the videos here: Also Read – BTS Rise of Bangtan: When V’s ‘Nico Nico Nii’ in the middle of concert performance left Jimin in splits of laughter [VIDEO]

24 yo jungkook performing ‘baepsae’ is driving me crazy ?‍?pic.twitter.com/OZwm1oUR2b

JUNGKOOK & V’S BAEPSAE OH MY GOD I CANT DO THIS ANYMOREEBJSJSpic.twitter.com/00YIlEM7y3

Y’all would know how Jungkook loves to imitate everyone and everything. So, he imitated ARMY too. An ARMY did a heart with fingers and Jungkook recreated the same when he saw it on the AV. Check out the super cute video here:

jungkook noticing the army making a heart with their fingers on the screen and instantly making one too, he’s so precious ? pic.twitter.com/nl4BFae9oy

His priceless reactions when ARMY screams his name

As much as ARMY loves Jungkook, he loves them back. At BTS’ concert at SoFi stadium, ARMY kept screaming his name and here’s how he reacted to the same…

Turning the stage into the ramp

Every BTS member is a model in themselves. Jungkook’s chiselled physique always sends ARMY thirsting. So, when the My Universe singer turned up in the all-black outfit, multiple fam cams caught multiple clips. Check them out below:

jungkook’s model walk. swaying his hips from side to side, pic.twitter.com/xxA86xJIKV

He also ripped his shirt open during the performance and ARMY caught it on the video. Check out the clip here:

JUNGKOOK WENT SO HARD THAT HIS TOP LITERALLY TORE??? LIKE IT LEGIT RIPPED ? pic.twitter.com/OUsVkHHzGI

When he was addressed as Bam’s dad

Jungkook is a doting pet dad to Doberman Bam. An ARMY had got a banner saying that she loves Bam’s dad and JK acknowledged it.

jungkook was smiling at an armys sign here which had written “bam’s dad, i love you” in korean ? THIS IS SO DEVASTATING pic.twitter.com/JNdF2E7Okp

The BTS members are always helping out the staff and appreciating them. Here’s when JK hyped the BG dancer at the concert and even hugged them later on:

Jungkook cheering and hyping up the backup dancers ?? pic.twitter.com/Fm6ECgnMCI

jungkook kneeled in front of the back dancers, clapped for them, and then hugged them with the biggest grin? pic.twitter.com/64KdOvp6EM

When he did a little wiggle on stage after a performance, ARMY captured it on camera. He spun around so hard once that his glasses fell off. He even mistook his water bottle for a mic during the performance. He is such an adorable dearie.

by far the cutest video of the night jungkook confused his water bottle for his mic??? pic.twitter.com/lOnBuGIfIN

jungkook’s reaction when he spun too fast and his glasses went flying ? pic.twitter.com/rfjfm5zZI4

JUNGKOOK FORGOT THE SECOND BOW SO JIMIN PULLED HIM BACK TO DO IT ? pic.twitter.com/EyGZe0XkFi

JIMIN GETS BEHIND JUNGKOOK AND THEY SWAY TOGETHER ? pic.twitter.com/tV1IQcEN5d

jungkook accidentally got poked by seokjin’s pig tails while he was trying to whisper something to him ? pic.twitter.com/7e4cZswF2c

40 seconds of jungkook not staying still during their ending speech pic.twitter.com/PCCQC3Bpcq

hahaha jungkook imitating jimin’s part in save me!! he was about to laugh pic.twitter.com/vTwRxIS2KV

When he finds peace in presence of ARMY

jungkook speaking in english and the way speaks is so cute ?

cant explain the look of peace on his face when jungkook removes his in ears for WAB pic.twitter.com/KrwtkXG2Ye

Jungkook has a massive fan following and has a lot of endearing qualities. We shared some that ARMY witnessed during the concert. More will come in the next two days of the concert. Cannot wait for more…